Elephants Are Being Beaten Just for a Game

It’s time to end the cruel spectacle of elephant polo. 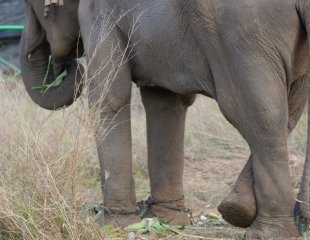 4 Apr 2018 – Very few Americans pay attention to the King’s Cup Elephant Polo Tournament put on by Anantara Hotel in Bangkok. The event garners little international attention and very little interest from anyone in Thailand, for that matter. But after handlers were filmed beating and gouging elephants and yanking on their ears with steel hooks, global condemnation of the event was swift and harsh. It’s time to end this cruel spectacle.

Behind the scenes, I watched handlers repeatedly striking elephants with bullhooks—heavy batons with a sharp hook on the end. These weapons were wrapped in cloth during the polo events but uncovered elsewhere. Without the use of these tools of torture, elephants can’t be displayed in public. Captive elephants live in fear of being beaten, which is why they so often behave submissively, even though they can be heard bellowing in distress.

In response to a shocking series of videos recently released by PETA showing handlers repeatedly beating elephants at the 2018 King’s Cup Elephant Polo Tournament at the Anantara Riverside Bangkok Resort in Thailand, event sponsors Sunraysia, the Campari Group, GROHE, Ecolab, JDE and Vespa have informed PETA that they’ll no longer support the competition, which touts itself as a charity event for elephants. By withdrawing their sponsorship, these companies have set a positive example for others that still support elephant polo “games.”

Elephants used for polo, rides, shows and other forms of entertainment suffer tremendously. The only way to make them tolerate having people ride around on their backs in polo games or for any other reason is to break them mentally and emotionally. They’re chained and beaten with bullhooks or other painful devices and are constantly threatened with violence to keep them afraid and obedient.

When not performing, elephants are typically deprived of everything that’s natural and important to them, including the opportunity to walk around and socialize, and they spend most of their life in chains.

Elephants are highly social beings. In nature, they thrive in matriarchal herds, protecting each other, caring for their babies and traveling many kilometers a day. Aunts babysit, siblings roughhouse and play, and grandmothers teach youngsters life skills, such as how to use different kinds of leaves and mud to ward off sunburn.

Elephants have the largest brains of any mammal on Earth, and they think, plan and remember. It’s true that elephants never forget; their memories are long and extraordinary, including the ability to remember lost loved ones. Their rituals for mourning the deaths of family members rival any that humans have developed.

While resort management claims that the handlers who were caught striking elephants were expelled, this kind of violence is business as usual in Thailand. Baby elephants are routinely beaten and subjected to other egregiously cruel forms of training. Tellingly, animals continued to be beaten and left chained on the polo grounds in floodwaters even after an exposé was released.

Behind the scenes at #Thailand’s King's Cup #ElephantPolo Tournament this weekend. @Anantara_Hotels know we are watching and still they can't leave the elephants alone.

Public opposition to the use of elephants and other animals in entertainment is stronger than ever before. As a result, dozens of travel agencies worldwide have stopped booking elephant-ride excursions.

The organizer of the International Elephant Polo Competition, tourism company Tiger Tops, recently announced that it would stop hosting the event in order to take a stand against cruelty to animals. Years ago, London-based Guinness World Records Ltd removed all references to elephant polo from the Guinness World Records books because of the abuse that elephants endure in the game. And the same year, following discussions with PETA India, Carlsberg Group withdrew its sponsorship of the Polo Cup.

Forcing these battered endangered animals to participate in silly spectacles is shameful and reprehensible. Thai officials should ban elephant rides and other abusive forms of “entertainment” immediately. In the meantime, if you care about elephants, never take a ride or buy a ticket to any event in which they are exploited for the public’s amusement.