First They Came for the Rohingya

Other ethnic minorities will be Myanmar’s next victims. 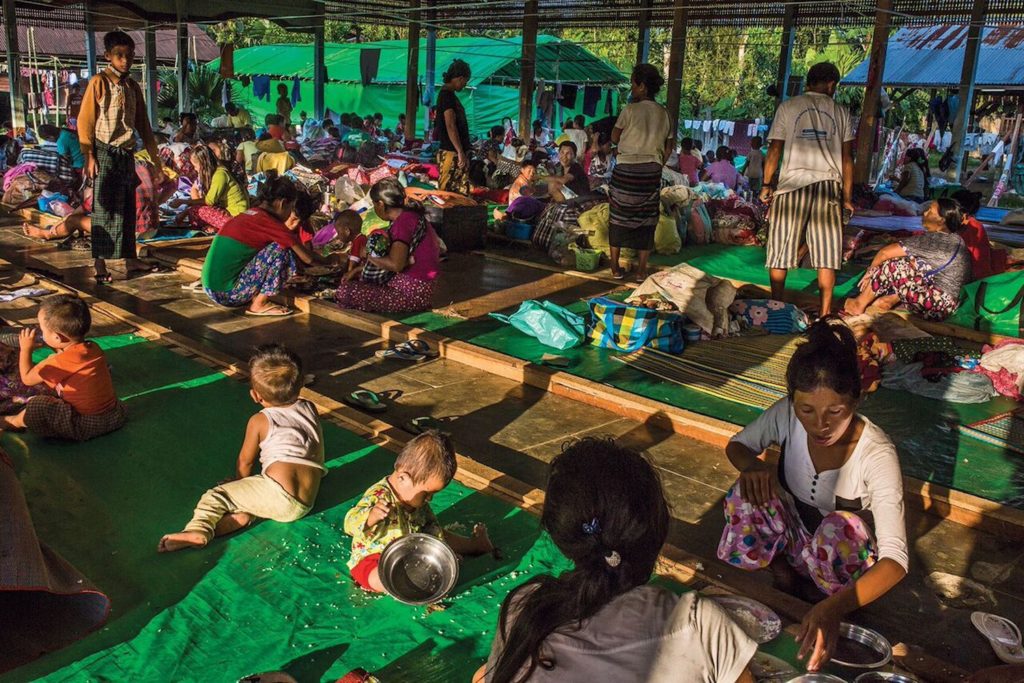 9 Apr 2018 – In recent months, international media coverage of Myanmar has focused on the plight of the Rohingya people in the west of the country. And for good reason: Since August 2017, brutal army attacks on this Muslim ethnic minority have sent more than 750,000 people — 90 percent of the Rohingya population living in Rakhine state — fleeing over the border to Bangladesh, in what can only be described as a coordinated campaign of genocide.

The numbers are staggering, but the hate isn’t new: The Rohingya, one of the world’s largest stateless groups, have long been a favorite target for persecution by the country’s Buddhist central authorities. The Rohingya have a different religion, a different skin color, and speak a different language than most of their neighbors.

Yet their well-publicized tragedy has obscured a darker truth about Myanmar: The country is in the midst of one of the longest multifront civil wars in the world. Each facet of this conflict cleaves along ethnic or religious lines — often both. The assault on the Rohingya is thus far from Myanmar’s only active military campaign against a minority group. And as soon as the Rohingya are completely removed from the country, the military will be free to redeploy its resources elsewhere.

When that time comes, Myanmar’s remaining minorities are likely to experience similartreatment. Many of these groups have been in the military’s crosshairs for more than half a century. Yet the persecution to come will far exceed anything they’ve suffered before. The campaign against the Rohingya has radically expanded the military’s capacity for ethnic cleansing and, perhaps more importantly, seems to have emboldened it, as the bulkof the population appears to support the army’s aggression toward the group.

To understand why all these conflicts have endured for as long as they have and why they are accelerating now, consider Myanmar’s demographic and political dynamics. Sixty-eight percent of the country’s population is Bamar (ethnic Burmese). The Bamar are primarily concentrated around the Irrawaddy Valley, the country’s heartland. Myanmar is also 88 percent Buddhist, and the majority of that group adheres to the conservative Theravada doctrine.

Surrounding the Irrawaddy Valley are a range of border areas home to a plethora of ethnic and religious minorities — almost all of which have sought independence from the central government at one time or another since 1948, when Myanmar, then known as Burma, gained independence from the British.

These secessionist movements stem from the fact that, soon after independence, Bamar Theravada Buddhists won overwhelming control of the government and the military and soon stamped theirs as the official identity of the state. In the years that followed, as a succession of military dictatorships attempted to build a unified nation, they systematically marginalized and repressed religious and ethnic minorities using a variety of extremely heavy-handed measures.

Numerous groups were denied citizenship, saw their villages demolished, and had their marriage rights curtailed. Authorities in Rakhine state have limited the number of children Rohingya Muslims are allowed to have — typically a maximum of two, just below the population replacement rate.

In the past few years, skirmishes between the army and the secessionist movements have intensified once again as the federal army has found new resolve. In 2011, battles between Myanmar’s military and the separatist Kachin Independence Army in the country’s north displaced nearly 100,000 Kachin people. Seven years later, the displaced are still living ininternal refugee camps, with few prospects for rebuilding their lives. And in the last two years, the army has increasingly taken to shelling targets in or near the civilian camps and villages.

In nearby northern Shan state, the military and the Taang National Liberation Army recently reopened hostilities — a continuation of a conflict that dates back to 1963. Over the last nine years, fighting between the army and the nearby ethnic Kokang Myanmar National Democratic Alliance Army has sent tens of thousands of refugees over the border to China. To the south, the army has targeted Christians among the Karen people, driving more than 100,000 refugeeinto Thailand over the last couple of decades.

It’s not just such displacements that darkly echo the Rohingya situation. Kachin and Karen women have reported that the military has used rape against them as a form of repression, much like the mass rapes reported by Rohingya refugees.

Perhaps the most lamentable aspect of the current violence in Myanmar is that it is occurring during the country’s process of democratic transition. When the country elected a civilian government led by Aung San Suu Kyi in 2015, Western diplomats hoped she would curb the army’s excesses. Yet the opposite has happened: The violence has only accelerated.

The problem, it turns out, is that decades of government propaganda have inculcated deep prejudices among Myanmar’s voting public against non-Buddhists and non-Bamar people. Radical Buddhist monks, and others who champion the so-called purity of the Buddhist state, dominate social media. Buddhist civil society groups advocating for Rohingya rights or the rights of Christian minorities are virtually nonexistent.

The problem, it turns out, is that decades of government propaganda have inculcated deep prejudices among Myanmar’s voting public against non-Buddhists and non-Bamar people.

It should thus come as little surprise that the military has not been the only persecutor of the Rohingya. Their Buddhist neighbors have often taken the initiative themselves. Since 2012, civilians have committed a large share of the village burnings and violent acts.

The ongoing Rohingya genocide is the result of a confluence of factors: a hostile civilian public, the tragic complicity of Aung San Suu Kyi’s civilian government, and a lack of meaningful censure from outside parties and the international community. With all of these elements already in place, there is nothing to spare Myanmar’s other ethnic minorities from meeting a similar fate.

Azeem Ibrahim is a senior fellow at the Center for Global Policy in Washington and the author of The Rohingyas: Inside Myanmar’s Hidden Genocide.

This article originally appeared in the April 2018 issue of Foreign Policy magazine.