25 Apr 2018 – While it will likely take the Organization for the Prohibition of Chemical Weapons weeks or even months to issue their final report on the alleged gas attack in Douma (an attack for which journalists and other independent parties have failed to find any evidence), the organization’s investigators have apparently spoken with Russian military officials after visiting the site of the Barzeh research center in Damascus – one of the three facilities targeted by the strikes. 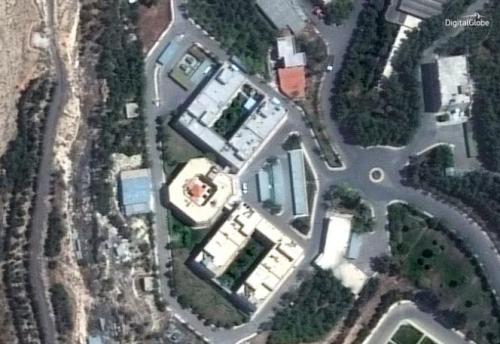 The Barzah Research and Development Center in Damascus, Syria, before it was struck by coalition forces on Saturday. 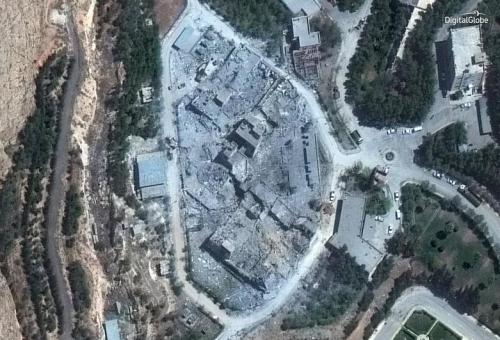 This satellite image, taken Monday morning, shows the Barzah Research and Development Center in Damascus after it was struck by coalition forces.

At the time we noted Paul Craig Roberts’ ‘awkward question’ to Washington’s warmongers:

If this were true, would not a lethal cloud have been released that would have taken the lives of far more people than claimed in the alleged Syrian chemical attack on Douma?

Would not the US missile attack be identical to a chemical weapons attack and thus place the US and its vassals in the same category as Washington is attempting to place Assad and Putin?

And now, according to Sputnik, the investigators, who spoke with Russian General Staff Col. Gen. Sergey Rudskoy, revealed that they had found no evidence of chemical weapons in the remains of research facilities that were supposedly integral to the Syrian Army’s chemical weapons program. Of course, this shouldn’t come as a surprise: After all, if the US, France and the UK really did bomb a building filled with chemical weapons, there would’ve been thousands – possibly tens of thousands – of bodies to show for it.

“Immediately after the attacks, many people who worked at these destroyed facilities and just bystanders without any protective equipment visited them. None of them got poisoned with toxic agents,” Rudskoy said.

Rudskoy said there was similarly scant evidence of chemical weapons exposure at the Han Shinshar facility, located in the province of Homs. Russia registered only seven missiles had struck the facility, while the Pentagon claimed that it had successfully fired 22 missiles. Russia has previously claimed that only 71 of 103 missiles launched by the coalition made it past Syria’s antiquated air defenses.

“According to the statements of the Pentagon’s representatives, 22 missiles hit the above-ground facilities. We registered no more than seven hits, which is shown in the space image,” he told a briefing.

Furthermore, the Russian Reconciliation Center for Syria said its representatives had questioned local doctors and investigated the site of the attacks. The doctors confirmed that they hadn’t recently treated any patients with signs of exposure to chemical agents, and investigators searching the area found nothing suspicious. Moscow had said the April 7 gas attack that purportedly took place in Douma, part of the Eastern Ghouta region that was recently reclaimed following a military victory over the last rebel forces in the area, was in fact staged by the White Helmets, an NGO that supports US interests in Syria under the guise of altruism. While the US has refused to share the supposedly “slam dunk” evidence that the Syrian government was behind the attack, US and French authorities have cited videos posted to YouTube by the White Helmets as sufficient proof of an attack.

But as Ron Paul argued in a recent column, even if the Syrian army did carry out the gas attack in Douma, evidence of this still wouldn’t justify the US, UK and France bombing targets inside a foreign country.

The Syrian civil war has been a bloody one. Hundreds of thousands of combatants (and tens of thousands of civilians) have been blown up by airstrikes, ripped to pieces by shrapnel or mutilated and murdered in some other grotesque fashion. The problem is, the US intervention wasn’t motivated by humanitarian instincts – rather, Washington’s outrage is very selective and politically motivated.

We are not the policemen of the world, Paul added. Bad leaders do terrible things all the time – and this is true even in the US. The US has neither the moral authority – or the money – to carry out overseas bombings. Especially now that it has become clear the Trump administration didn’t have sound evidence of an attack, the hasty decision to resort to force was a foolish one.

Zero Hedge is an English-language financial blog that aggregates news and presents editorial opinions from original and outside sources. The news portion of the site is written by a group of editors who collectively write under the pseudonym “Tyler Durden” (a character from the novel and film Fight Club). Wikileaks