Should Israeli Settlers Be Considered Civilians?

Article 49 of the Fourth Geneva Convention: “The Occupying Power shall not deport or transfer parts of its own civilian population into the territory it occupies.”

29 Mar 2018 – It is time to pose a question: Are Israeli settlers civilians? Or are they illegal occupiers? A group of Israeli settlers made the move, to seize land in East Hebron (al-Khalil) last Monday (26 Mar 2018), setting up camp – adjacent to the ‘Kharsina settlement’ – backed by an entourage of heavily armed soldiers. This move threatens three Palestinian families, with fears that they will soon be dispossessed of their land and homes. Those at risk of being cleansed and their property stolen, are the Eida, Jwihan and the al-Halawa families. The initiative to take this land came from the settlers themselves, who now occupy the 70-dunums. The settlers are living in four newly purchased caravans.

The above example clearly illustrates the way in which illegally established settlements, in the West Bank, come to their fruition.

Most people do not understand the true nature of Israel’s settlers, many granting settlers the same status that regular Israelis – living within Israel’s internationally accepted borders – have.  The point that will be challenged in this article, is an Israeli settlers status as a “civilian”.

The fact of the matter is that West Bank settlers are completely illegal. With the continuing development of West Bank settlements, Israel is currently violating several United Nations resolutions, including the latest resolution 2334, which called for the state to completely dismantle its settlements and withdraw its citizens.

One of the most important duties listed of an occupying power – according to the ‘1907 Hague Regulations’ and the ‘Fourth Geneva Convention’, as well as within provisions of ‘Additional Protocol I’ and ‘Customary International Humanitarian Law’ – is that the occupying power, does not transfer its population into the occupied territory:

“The Occupying Power shall not deport or transfer parts of its own civilian population into the territory it occupies.” – Fourth Geneva Convention (Article 49)

According to International Law, it is clear that Israeli settlers illegally occupy the land on which they live. Regardless of whether it was their own initiative to participate in illegal colonies or not, the settlers are committing a crime. The key question to ask about the ongoing settlement campaign, however, is; are settlers, who are actively committing a crime, whether on behalf of their government or not, to be classed as a “civilian”?

Is someone who is participating in harassing, killing, aiding the occupation army and changing the demographics of the West Bank, to be classed as a civilian? Are Israeli settlers to be classified the same way as someone living in territory internationally recognized as ‘the state of Israel’?

As of the ‘Oslo Accords’ of 1993, the West Bank has been divided into three main areas – ‘Area A’, ‘Area B’ and ‘Area C’ – in ‘Area C’, which was supposed to constitute 61% of the West Bank, Israel maintains a full military occupation. Israel has approximately 125 settlements and more than 100 outposts, in ‘Area C’ of the West Bank, where illegal settlers actually outnumber Palestinians. 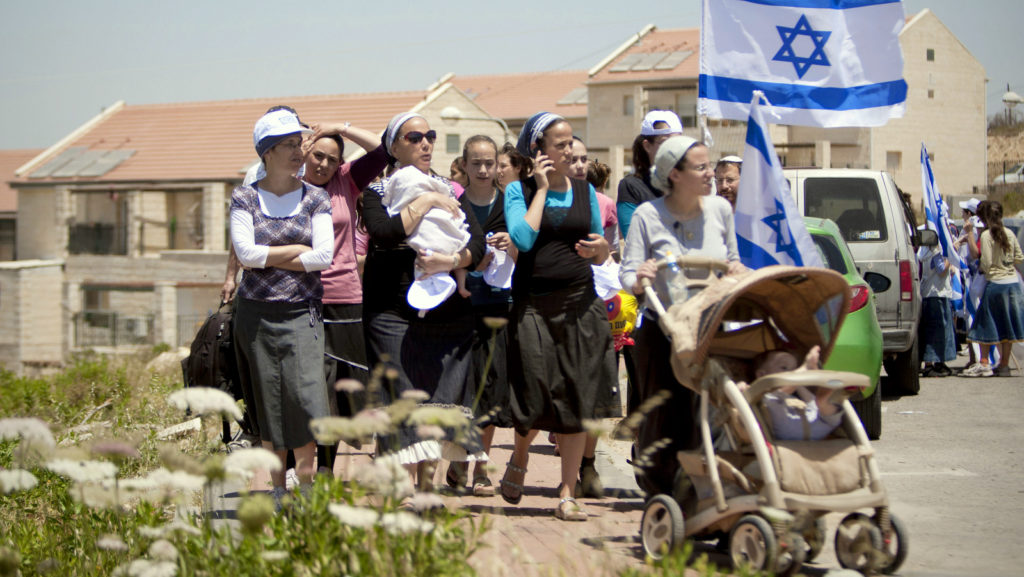 Jewish settlers march during a demonstration against a proposed decision to evacuate the Jewish-only West Bank colony of Beit El near Ramallah. (AP/Ariel Schalit)

How Does Israel Take Land: Settlements and Outposts

In order to really get to the heart of the settler issue and to properly classify them, it is essential that we understand how these settlements are first established.

A lot of the language surrounding this issue makes things complicated, so let’s get a basic understanding of what’s going on. ‘Settlements’ are defined by the Israeli government as a colony, that they classify as legal and have become a part of a government initiative. Israeli outposts are just settlements that are unofficial, to the Israeli government.

An outpost is how most settlements start. Israeli citizens simply decide to move somewhere and set up camp, then, later on, the Israeli government recognizes the outpost as a legitimate settlement.

As soon as settlers set up their ‘outpost’, the Israeli army will guard them and the Israeli government will supply them with all the essentials to build a settlement with (water systems, military protection, electricity etc.). This scenario should sound familiar, as the case used at the start of the article illustrates this point also.

The next level of analysis would be to ask whether the settlers of the ‘outposts’ are different from those living in ‘settlements’. Settlers of the outposts have stolen this land out of their sheer willingness to do so, this is not strictly a state mission, but rather something the state works with the settlers to achieve its aims.

So if ‘outpost’ settlers are acting on their own and not as a result of the state, then are we to view them as civilians? Or are we to even give them the same status, as those living in colonies accepted as ‘settlements’? 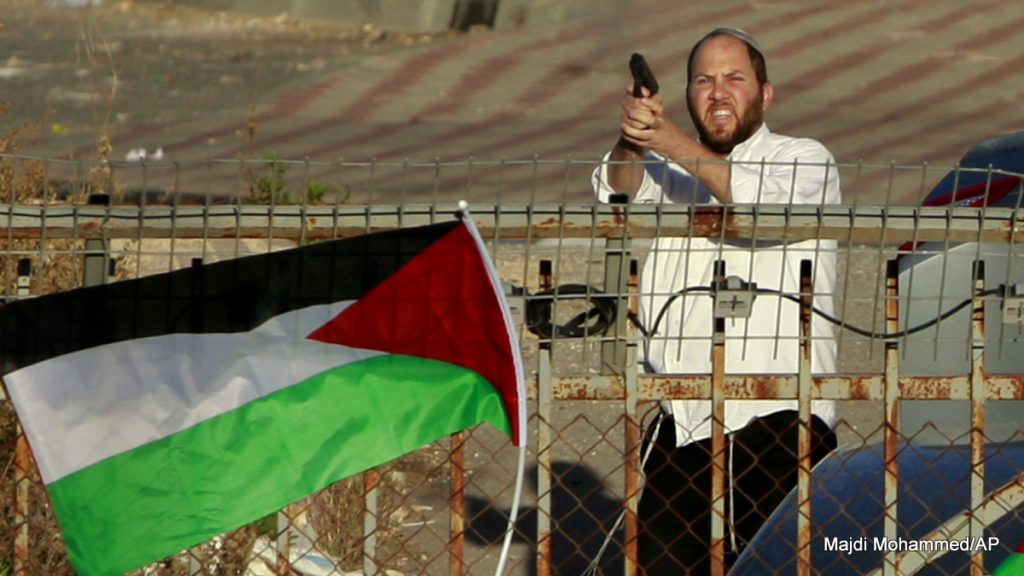 An Israeli Jewish settler shoots in the air as Palestinians protest against the Prawer Plan to resettle Israel’s Palestinian Bedouin minority from their villages in the Negev Desert, near the Israeli settlement of Bet El, north of the West Bank city of Ramallah.

Are All Settlers Not to Be Considered Civilians?

Regardless of whether the intent was by the state or not, it is clearly stated in the Geneva convention that, under a military occupation, the settling of the occupying power’s population inside the land they occupy, is illegal.

A key thing to keep in mind is that these settlers physically occupy the land themselves. The aim of the settler projects, ‘outpost’ and ‘settlement’, is to colonize the land. Acquiring land through war is, of course, illegal and the most tasked job, within the occupation, is guarding settlers and settlements.

The settlers are the occupation, more so than the soldiers. Most soldiers only occupy for a few years and at the demand of the government, not their own will.

Another thing to take into consideration is that settlers physically deprive the native Palestinians of their basic requirements. The human rights organization ‘al-Haq’, found that Israeli Settlers in the West Bank, use as much as 6 times more water than Palestinians. That same study also found that whilst Palestinians lived on an average of 73 liters (per day, per capita), which is below the recommended standard amount, according to the ‘World Health Organization’. Israeli Settlers were even found to have been using more water than people living inside of the state of Israel itself.

About fifty percent of the West Bank has been annexed due to settlements. Through the usage of Settlement Israel also operates its exploitation of the West Banks resources. Even 90% of the West Bank’s water is stolen from underneath the Palestinians, primarily by a company called Mekorot. The settlers occupy the land, steal from it, commit violent harassment (even murder) against the Palestinians, as documented by the ISM, Christian Peacemaker Teams, and B’Tselem on a regular basis.

“Reaffirms the legitimacy of the struggle of peoples for independence, territorial integrity, national unity and liberation from colonial and foreign domination and foreign occupation by all available means, particularly armed struggle”.

If illegal settlers inside the West Bank, willingly uphold the occupation, is it fair to say that by any reasonable standard, they are not to be classed as civilians? Furthermore, are Palestinians to be condemned for violent acts of resistance against settlers, if the settlers are indeed occupiers? If we are to look to International Law,  it is clear that Palestinians have every right to resist their occupiers.

Examining the conduct of settlers, it is safe to make the assumption that Israeli settlers make their own decisions when violating international law.

Settler organizations, such as ‘Regavim’, aim to pressure the Israeli Government into creating court orders to bulldoze private property and legitimize settlement activity. One may even argue that the settlers have a certain stranglehold on the government itself, due to the political pressure they apply to the authorities.

So are Israeli settlers really to be granted the status of being a “civilian population”?

This answer will depend upon, whether you believe in international law and morality or not.

Robert Inlakesh is a journalist, political analyst, and human rights activist who specializes in delivering insight into the geopolitical scene of the Middle East, specializing in the political and humanitarian situation in Palestine.