The Campaign to Exterminate Muslims 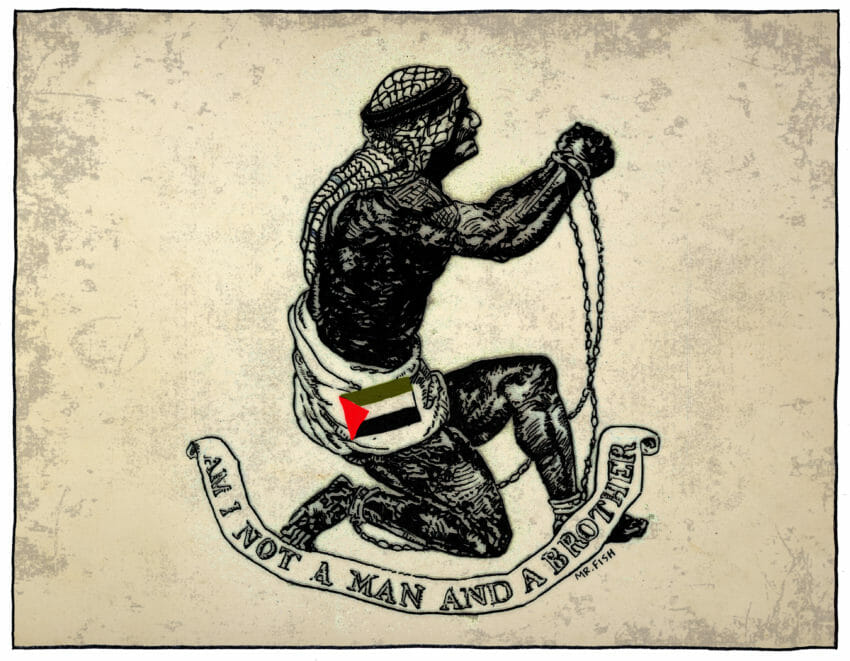 8 Apr 2018 – The Israeli army’s wanton slaughter of unarmed Palestinians trapped behind the security barriers in Gaza evokes little outrage and condemnation within the United States because we have been indoctrinated into dehumanizing Muslims. Islam is condemned as barbaric and equated with terrorism. The resistance struggle against foreign occupation, whether in Afghanistan, Iraq or Gaza, sees Muslims demonized as the enemy. Muslims are branded as irrational and inclined to violence and terrorism by their religious beliefs. We attack them not for what they do but because we see them as being different from us. We must eradicate them to save ourselves. And thus we perpetuate the very hatred and counterviolence, or terrorism, that we fear.

Muslims in this age of racialized authoritarianism have been stripped of due process in our courts and are subject—as Abid Naseer and Haroon Aswat were in Britain before being extradited to the United States—to pretrial incarceration for years. They endure police brutality and secret trials, are convicted on secret evidence they cannot see and suffer long-term detention in solitary confinement, often in clandestine prisons known as black sites. They are kidnapped anywhere in the world and taken, hooded, drugged and shackled, to the secret sites. They are tortured through savage methods such as beatings, “walling,” sexual humiliation, close confinement, prolonged isolation, water dousing, electric shocks, waterboarding and so-called rectal rehydration. Their citizenships are revoked. Their communities and mosques are harassed, infiltrated and monitored by law enforcement. Muslim children are viewed as future terrorists. Muslim women as breeders of terrorists. Muslim men as dangerous. We are the maniacal Kurtz in Joseph Conrad’s “Heart of Darkness,” keeping the heads of “savages” on stakes outside our fortress and crying out “Exterminate all the brutes!”

We have declared a worldwide war on Muslims. Muslims, who read us better than we read ourselves, are rising up to resist. Hundreds of thousands of Muslims in the Middle East have been butchered since our invasion of Afghanistan. Iraq, Afghanistan, Syria and Libya have been destroyed as viable states. Millions of Muslims have been displaced or are refugees. And when desperate Muslim families attempt to flee to Europe or the United States from the hell we created in the Middle East, they are thrown into displacement camps or turned back and branded as disease carriers, thieves, rapists, barbarians and terrorists. Islamic culture and religion in our Manichean narrative have been shorn of all nuance, humanity, complexity and depth. Islam has been replaced by a xenophobic cartoon version, an image that, to use the words of Frantz Fanon, is the “quintessence of evil.” We respond to the crisis we created out of ignorance, self-exaltation and racism.

to kill
is to erase an image
off a mirror:
side-step
no body
just a gaping hole
upon an indifferent world

Israel’s slow-motion genocide of the Palestinian people, justified by the racism and Islamophobia that are central to Israeli identity, has entered a new, deadlier phase. No longer constrained by any pretense of respecting human rights or a peace process, Israeli soldiers, although they are not threatened, fire indiscriminately into crowds of unarmed Palestinians, killing or wounding men, women, children, the elderly and journalists. The sheer number of the dead and wounded—nine or more Palestinians killed by Israeli fire and hundreds injured on Friday alone—testifies to raking the crowd with gunfire. In a civilized world, Israel would be immediately slapped with sanctions, boycotts and divestment—the only mechanism left to protect the Palestinian people from extermination—but we do not live in a civilized world. We live in a world where murder and racism are state policy, where the oppressed are dehumanized and unworthy of life and where our mutant demagogues and despots revel in the rivers of blood they create.

This racialized authoritarianism, one that defines Donald Trump and Israeli Prime Minister Benjamin Netanyahu, has ominous consequences for the oppressed. It is fed by a willful refusal to accept our responsibility for the social and political disintegration as well as the violence in the Middle East and, increasingly, at home. Most academics, trapped in the meaningless silo of Islamic writings on apocalyptic terrorism, contribute nothing to the debate. The press, which has turned journalism into nonstop entertainment and the celebration of nonexistent American virtues, is complicit in this perpetuation of anti-knowledge, which Tennessee Williams once called our voluntary matriculation into a school for the blind. It dehistoricizes these movements. It certifies radical jihadists, and by extension Islam, as incomprehensible. Since terrorism is incomprehensible, and since it is an intrinsic part of Islam, Muslims are worthy not of investigation but annihilation. But facts don’t speak for themselves, as Edward Said noted. They require context to be understood, and all context is absent.

“You could hardly begin (in the public sphere provided by international discourse) to analyze political conflicts involving Sunnis and Shi’is, Kurds and Iraqis, or Tamils and Sinhalese, or Sikhs and Hindus—the list is long—without eventually having to resort to the categories and images of ‘terrorism’ and ‘fundamentalism,’ which derived entirely from the concerns and intellectual factories in metropolitan centers like Washington or London,” Said wrote in “Culture and Imperialism.” “They are fearful images that lack discriminant contents, or definition, but they signify moral power and approval for whoever uses them, moral defensiveness and criminalization for whomever.”

The pattern of persistent decontextualization traps us in an endless cycle of violence for violence. Mohammad-Mahmoud Ould Mohamedou in his book “A Theory of ISIS: Political Violence and the Transformation of the Global Order” writes of the now-standard response following a terrorist attack:

For every time a new radical Islamism-related attack takes place in New York, Washington, London, Paris, Brussels or Berlin, a ritual of denial of the deeper political issues plays out in an increasingly familiar fashion. The sequence is performed thus: shock gives way to fear followed by anger; security experts step up hurriedly in television studios and on social media to denounce the lack of preparation by the authorities; specialists in radical Islamism (or simply Islam) follow, declaring that IS (previously Al Qaeda) has been weakened, is on its way to be defeated and is merely lashing out with desperate attacks; Muslim communities in Western countries are called out and racist and violent attacks against them sometimes take place (hours after the March 2016 attacks in Brussels a #stopislam movement started trending, revealing the depth of bias that had come to overtake sectors of the Western world, readily associating Islam and terrorism); sympathy movements for the victims of city where the attack took place are set up (Je suis Charlie, I am Brussels, etc.); calls for tougher legislation (surveillance mechanisms, detention conditions, nationality measures, immigration procedures, travel regulations, dress codes, access to pools, prayer sites, etc.) are spoken urgently; arrests are made in neighborhoods where Muslim migrants are known to reside and bombing is redoubled in Iraq, Syria, Afghanistan, Yemen or Libya.

The Obama administration under counterterrorism adviser John Brennan, now a national security and intelligence analyst for NBC and MSNBC, set up a database, Disposition Matrix, of terrorism suspects across the globe. It is known informally as the kill list. Those on the list are targeted by clandestine CIA extradition units, special forces, militarized drones and airstrikes. These techniques for racialized control of Muslims are drawn from the blueprint of colonialism, although the state now uses the coded language of ideology to mask its racist assault. As in colonialism, those who defy the “liberal democratic” state have forfeited all rights and deserve to be treated as beasts because they are beasts. This stance of collective criminalization of a group or race will have ominous consequences as the corporate state, beset by the growing unrest from deindustrialization and global warming, begins to view larger and larger segments of the population as hostile.

“In some sense, the figure of the terror suspect forms the testing ground upon which Western versions of ‘democracy’ and ‘human rights’ are deliberated,” writes Nisha Kapoor in “Deport, Deprive, Extradite: 21st Century State Extremism.” “It is via the representation of these individuals that cases are made in support of summary killings, bigger bombs, drone strikes, ever more grotesque forms of torture, and clandestine and indefinite detention. It is also through the policing of such individuals that mechanisms have been put in place in Britain [and the United States] for the growing use of secret justice, the retraction of the provisions of citizenship and the move away from human rights protections.”

Policies have consequences. The decision to hunt down Muslims around the globe, giving to the so-called war on terror a transnational dimension, means also that those who oppose us are not restricted by national boundaries. The terrorists who carry out these attacks are mirror images of ourselves, consumed by the same narcissism and cult of the self that define celebrity culture. They post self-indulgent videos of rants against the West and of their beheadings of captives clad in orange jumpsuits. They replicate the cultural effort to film “Life the Movie.” The images we use to communicate with the world, as well as each other, infect all of their messages to us. They are not from a medieval era. They are creations of modernity. They feed to us their own versions of the pornographic violence that fascinates and deforms our culture. They know this is how you communicate with the West. And we communicate back in the same manner.

The Israeli massacre of Palestinians is a prelude to a dystopian, neocolonial world where global elites, hoarding wealth and controlling the mechanisms of power, increasingly resort to widespread bloodshed to keep the oppressed at bay. What Israel is doing to Palestinians—impoverished and trapped without adequate food, water and medicine in the open-air prison that is Gaza, a strip of land subject to repeated murderous assaults by the Israeli war machine—will be done to desperate climate refugees and citizens who rise up to protest the pillage by global oligarchs. Those who resist will be as dehumanized as Muslims. They too will be branded as terrorists. The global elites have a plan for the future. It is visible in the killing fields of Gaza.