US Nuclear Posturing Has Adversaries Gearing Up, Not Standing Down

3 Mar 2018 – In Secretary of Defense Jim Mattis’ preface to the 2018 U.S. Nuclear Posture Review (NPR), he describes its purpose as “to ensure a safe, secure, and effective nuclear deterrent that protects the homeland, assures allies and, above all, deters adversaries.” These are worthy goals, but likely impossible to achieve so long as nuclear weapons exist.

Despite the desire to achieve perfection, it is not possible for humans to do so, as demonstrated through the years of the Nuclear Age by many accidents, miscalculations and close calls.

The biggest problem with a nuclear deterrent force arises from any attempt to determine its effectiveness. How can possessors of nuclear weapons assure that their nuclear weapons are effective in providing a deterrent to another nuclear-armed country? The answer is that they cannot do so in any physical sense.

Mattis also refers to a “credible” nuclear deterrent. Presumably, to be effective, a nuclear deterrent force would need to be credible to an adversary, but credibility is also a psychological term. It encompasses not only the size and power of a nuclear arsenal, but a belief in a particular leader’s willingness to actually use the nuclear weapons should deterrence fail.

It is interesting that in the 2018 NPR (the Trump NPR), as with previous NPRs, there is allowance for the possible failure of nuclear deterrence. This should not be reassuring to anyone. Mattis ties the need to modernize the U.S. nuclear arsenal to the credibility of the nuclear deterrent force. He also ties credibility to “ensuring that our diplomats continue to speak from a position of strength on matters of war and peace.” 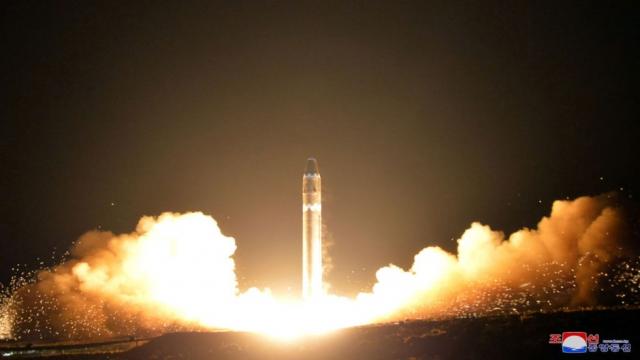 The 2018 NPR points the finger at Russia, China, North Korea and Iran. Russia and China are accused of modernizing their nuclear arsenals, making it necessary for the U.S. to do the same. It points out that Russia, in addition to its seizure of Crimea, has military strategies reliant on nuclear escalation. It talks about China “expanding its already considerable forces,” but fails to mention that China has a policy of minimum deterrence and has made a pledge of No First Use of nuclear weapons.

Nor does the 2018 NPR mention that both Russia and China have reacted to the U.S. placing missile defense installations strategically near their borders, or that this has only been possible due to the 2002 U.S. unilateral withdrawal from the 1972 Anti-Ballistic Missile (ABM) Treaty, which severely limited ABM deployments.

Despite the promising interactions between North and South Korean athletes at the 2018 Winter Olympics, Trump has imposed tough sanctions on North Korea and upped his threats toward the country. Personalizing his message, Trump menacingly stated, “If the sanctions don’t work, we’ll have to go to Phase 2. Phase 2 may be a very rough thing. May be very, very unfortunate for the world.” This is the dangerous and threatening rhetoric of a madman.

Trump has also failed to certify Iran’s compliance with the nuclear deal, leaving open the possibility of killing the deal and increasing the odds of yet another war and Iran’s return to its previous nuclear program.

Mattis concludes his preface to the Trump NPR by acknowledging the vital role played by U.S. servicemen and civilians “in maintaining a safe, secure, and ready nuclear force.” The fact that the U.S. nuclear deterrent force is “ready” is not necessarily a blessing and should be of little comfort to Americans or anyone else. We are all part of “the world” that Trump is threatening to punish if North Korea does not submit to his will. He should be impeached now, before he does something “very, very unfortunate for the world.”

The 2018 NPR calls for new and smaller nuclear weapons, those that would make it easier to cross the barrier into nuclear war. The NPR also chooses to keep all three legs of the nuclear triad: intercontinental ballistic missiles, bomber aircraft and submarine launched ballistic missiles.

There can be little doubt that the U.S. nuclear posture will spur other nuclear-armed countries to do the same, thus assuring new arms races and increased nuclear dangers ahead. One has to wonder if the expensive and provocative technological modernization of the U.S. nuclear arsenal and other nuclear policies set forth in the 2018 NPR will be what takes us from the Nuclear Age back to the dark ages.