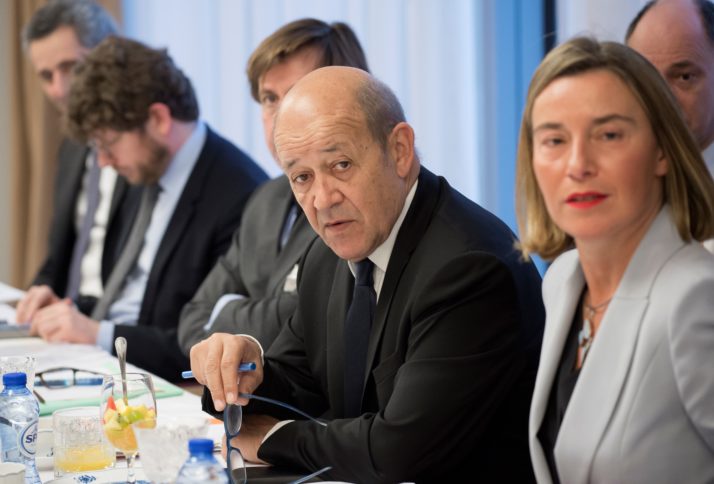 French Foreign Affairs minister Jean-Yves Le Drian looks on prior to a meeting between Iran Foreign minister and High Representative of the European Union for Foreign Affairs and the foreign ministers of Britain, Germany and France at the EU headquarters in Brussels on January 11, 2018.
John Thys/AFP via Getty images

16 May 2018 – The foreign ministers of France, Germany and the United Kingdom, along with Iran’s foreign minister, have agreed on a nine-point economic plan to keep the Iran nuclear deal alive.

Meeting in Brussels on Tuesday, the ministers rushed to discuss alternative solutions after US President Donald Trump on May 8 withdrew from the deal and vowed to impose tough economic sanctions against Tehran.

“There was awareness of the urgency,” Federica Mogherini, the European Union’s foreign policy chief, said after the meeting.

Heiko Maas, Germany’s foreign minister, acknowledged that the process to resolve the issues surrounding the US withdrawal would not be easy.

Before the meeting, Boris Johnson, the UK’s foreign secretary, said: “the UK and our European partners continue to view the nuclear deal as vital for our shared security, and remain fully committed to upholding it.”

Participants in the meeting stated that the strategy is expected to produce “practical solutions in the next few weeks” by tackling financial concerns such as business, banking transactions and possible interruptions to oil production.

Mohammad Javad Zarif, Iran’s foreign minister, said collaboration with the EU was on the right track.

“I believe it’s a good start. We’re not there, we’re beginning the process,” he told journalists after the meeting.

Mogherini confirmed that deputy foreign ministers from the three European nations and Iran would meet in Vienna next week for an “experts talk.”