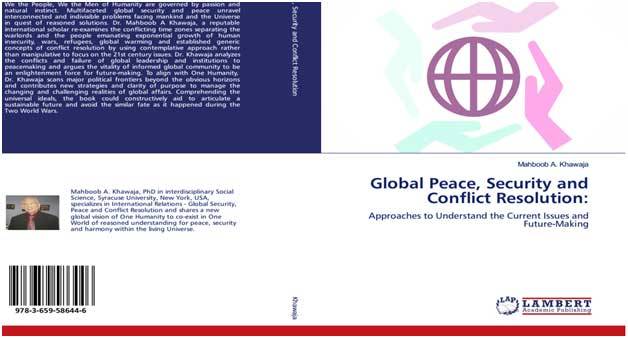 In a world fraught with violence, misuse of power, corruption and complex conflicts endangering human security and global peace, the book offers an outstanding contribution to rational thinking envisaging intellectual excellence and proactive vision for change and adaptability to the futuristic challenges in global affairs. The author has a critical passion to imply contemplative strategies rather than manipulative approaches to analyze the 21st century global affairs.

The encompassing impeccable research and unraveling understanding of global peace, security and conflict resolution excludes stereotype and media dramatization of conflicts. It could be reasonably characterized as a combination of enriched new vision for One Global Humanity complemented by analytical insights of the current global affairs offering a discovery of the past integrated into the making of a sustainable future.

The Universe is engulfed with wrong human thinking, dysfunctional organizations, secret weapons and nuclear disasters and global warming of course is a time bomb in waiting. At a time of hegemonic global politics, hegemonial puzzles are not the workable rational solutions. Leaders like actors who pretend to be intelligent mock and reject the voices of reason for peace and human security. The global humanity looks to scholars of new ideas and visions to safeguard the future, logically spells out Dr. Mahboob Khawaja – “Approaches to Understand the Current Issues and Future-Making” – Global Citizenry as the nucleus body of peace and conflict resolution to articulate  a new future.

Dr. Mahboob A. Khawaja a distinguished in global affairs shares a deep sense of commitment to foster reality over rhetoric as most often academic model’s theories unfold in classroom discussions. Some may call him a dissident intellectual but he offers a rational framework of wide range of contemporary issues from the impacts of colonialism, failure of the working of the international institutions, strategies for conflict assessment and conflict resolution, the East-West clash of civilizations, the war on terrorism, Islamic fundamentalism, imperatives of human security, violations of international law and justice in conflicts, humanitarian issues in displacement of the refugees and hopes for change and adaptability to the future-making.

We the People, We the Men of Humanity are governed by passion and natural instinct. Multifaceted global security, peace and conflicts unravel interconnected and indivisible problems facing Man, Humanity and the Universe in quest of reasoned solutions. Dr. Mahboob A Khawaja, a reputable international scholar re-examines the conflicting time zones involved between the warlords and people emanating exponential growth of human insecurity, sectarian wars and refugees, violence, global warming and established generic concepts of conflict resolution by using contemplative approach rather than manipulative approach to focus on the pertinent issues of the 21st century global affairs.

Dr. Khawaja analyzes the perpetuated wars and failure of the global leadership and institutions to safeguard the humanity from the scourge of wars and argues the vitality of informed global community to be an enlightenment force for future-making. To connect with One Global Humanity, the author ponders beyond the obvious horizons on major humanitarian and political frontiers and contributes new strategies and clarity of purpose to manage the changing and challenging realities of the 21st century global affairs.

Comprehending the universal ideals, the book could constructively aid to articulate a sustainable future and avoid similar fate as it happened during the previous 2WW. We live in a world that was imagined and articulated in history, not the outcome of futuristic intellectuals and their visionary ideals, rational assumptions, mode of thinking, individual and collective perceptions and aspirations of the masses defining the global community of One Mankind.

The 21st century knowledge-based mankind needs New Idea Men, people of proactive visions and commitment as were some of the intellectual guides and leaders of the preceding centuries who took initiatives to invent new things for human progress and evolution, created new commerce, industries and shortened the distance of the earth and space, looked beyond the obvious and above, and discovered new world of innovative imagination, change and human interests, civility and productivity. The author shares the ideas and ideals for these unknown and most often unspoken imperatives for the good of the global humanity.

The future of peacemaking, security and conflict resolution depends on using new ideas and ideals for rational outcomes. We, the people are capable to contribute new ideas and ideals to envisage new futuristic thinking and visions for a world that is not yet planned but ostensibly to be different from the present and conceivably revulsionary than being revolutionary in relation to the status-quo of the contemporary global human, economic, moral and political affairs overwhelmed by few people of class and economic and social ethnicity and related outgrown privileged corporate institutions.

The informed global humanity has no passion or preference for wars but for the unity of humanity, peace and sustainable human security. To substantiate and converge on human intelligence and the originality of human consciousness as One Humanity, We the People of the Globe are capable to pioneer a New World of reasoned compassion and understanding for a sustainable future.