Jerusalem Can Never Be Taken Off the Table 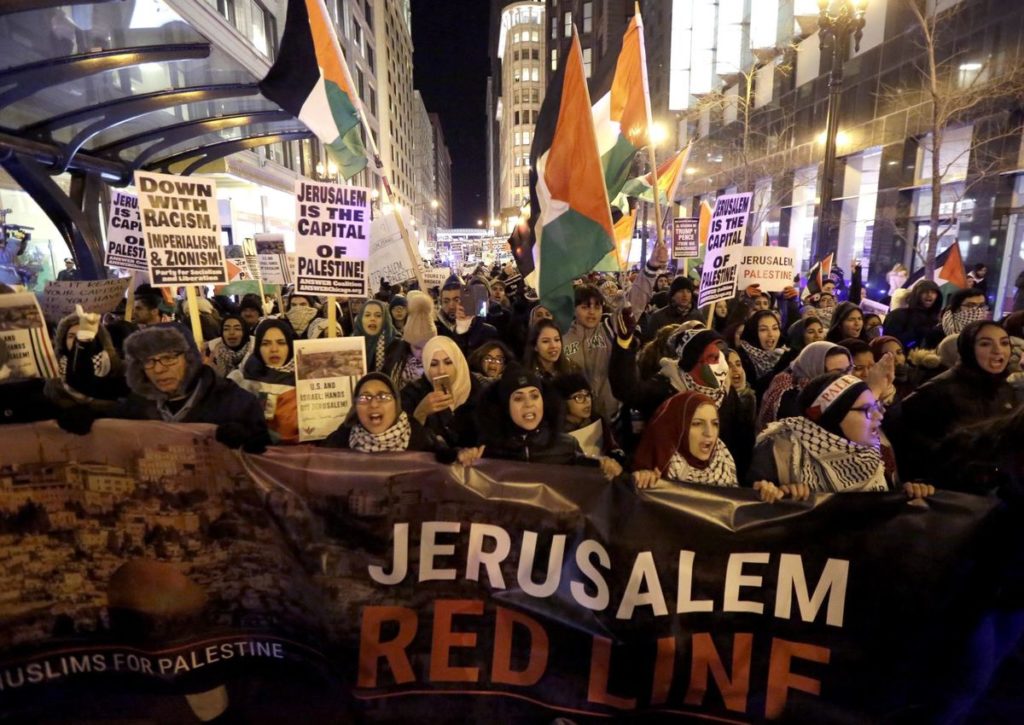 15 May 2018 – Ben Gurion in 1948 said, “We must do everything to insure the Palestinians never do return. The old will die and the young will forget”.

In a recent interview with Helena Cobban hosted by the Institute for Palestine Studies, Dr. Rashid Khalidi, the founder of the Journal of Palestine Studies, he states that the recent declaration by the United States regarding Jerusalem has brought the Jerusalem issue again to the table.  Jerusalem is again gaining more attention internationally and activists in the US and Europe are protesting continuously the US decision to move its embassy to Jerusalem in recognition of the city as the capital of Israel.  The actions of the US are also unmasking the intimate relationship with Israel and the undemocratic Arab countries in the Middle East.

In Jerusalem, Israeli Defense Minister Avigdor Liberman signed a decision to close Elia Youth Media Foundation and classified it as a terrorist organization .Ahmad Safadi who is the director of the foundation, believes this is an Israeli attempt to silence the voice of truth in the city of Jerusalem, there is no justification for the closure.

According to the recent Weekly Settlement Report written by Madeeha Araj of National Bureau for Defending Land and Resisting Settlement, the policy of Judaization and silent confiscation of lands practiced by Israeli government increased after the Oslo Accord of 1993 and has intensified in the last two years, especially with the election of President Donald Trump.  The Israeli Knesset passed the law of ”Entry into Israel” in 2017, which allows the Israeli Minister of interior to revoke the status of “Permanent resident” from those living in Jerusalem who do not hold Israeli citizenship.  This amendment specifically targets Palestinian citizens of occupied Jerusalem who don’t hold Israeli citizenship.  Israeli occupation has for years been granting Palestinians living and marrying Jerusalemites Permanent Resident status without obtaining Israeli Citizenship. The law is part of the policy of increasing restrictions on Jerusalemites and the annexation of occupied Jerusalem.  These laws and decisions of the Israeli occupation are contrary to international law which prohibits the annexation of occupied land.As part of the policy of Israeli occupation based on the displacement of Palestinians, the Israeli Peace Now movement revealed that the Israeli district committee recently discussed four settlements schemes in the Sheikh Jarrah neighborhood in Occupied East Jerusalem which is primarily Arab Palestinians. There are also laws that allow for Jews to come to Palestine and claim property through settlement association, while preventing Arab Palestinians from coming back to reclaim homes they abandoned in the 1948 war.

Jerusalem is considered one of the oldest cities in the world.  Over its history, Jerusalem has been attacked and captured many times, and destroyed twice.  Scholars believe the first human settlements in Jerusalem took place during the early Bronze Age around 3500 B.C. Jerusalem is considered a holy city to Muslims, Jews, and Christians and is mentioned in the holy books of all three faiths.

After the war of 1967 between Arab armies and Israel, Israel captured Jerusalem and dealt with the residents of Jerusalem on the grounds that they are residents and not citizens.  The residents are required to prove their connection to the city of Jerusalem to reside there.  Obtaining Jerusalem residence status through marriage or child birth is very difficult and is not automatically given.  Palestinian residents of Jerusalem are subject to losing their Jerusalem residency by living outside the city for more than three years, studying abroad, joining an organization that is considered a danger to Israel, or being jailed or imprisoned due to political activity

Storytellers of Jerusalem such as Mahmoud Shaquir, Jamil Salhout, and Dima Samman wrote extraordinary memoirs describing their childhood, experiences, and the history their witnessed.  They have large collections of remarkable treasures of writings on life, culture, people, music, and history of the old city.  Their stories span over many decades from the Ottoman empire, the British mandate, and founding the state of Israel.  Those storytellers offer an intimate glimpse of life in the city with the hope of awakening the people to save Jerusalem from the invasion of Judaization.