Nicaragua: The Symbols of Rebellion

Never has the Nicaraguan flag been so prominent in all aspects of social mobilization as it has in these past few days. 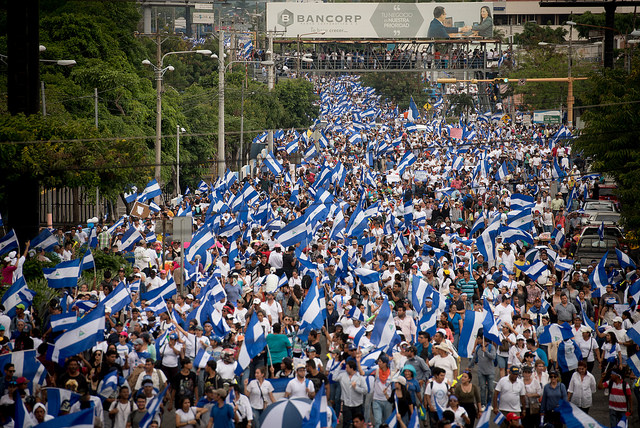 12 May 2018 – One of the most important features of the April Insurrection, as the new cycle of social movement in Nicaragua is being called, is the dispute over the symbols of power.

Over a ten-year period, the Ortega-Murillo government constructed powerful symbols that included sites, colors, messages and music, among other things, and imposed these on Nicaraguan society through their communications media and the official speeches. The mobilization of the past weeks has not only overturned them, but also emptied them of meaning. All of them are now territory in dispute.

The first symbols to fall were the so-called “trees of life” that the people have baptized as arbolatas [arbol for tree plus lata for tin can] or “Chayopalos” [Roughly, “Rosariosticks”]. These are some 100 large tree sculptures of colored metal that Vice President Rosario Murillo had installed, mainly in Managua, and that from the beginning were identified as emblems of her and Ortega’s power.

These Chayopalos were the first targets of the students’ anger over the repression. The students burned them and later toppled nine of them, one by one. The explosions of joy from the people presiding over their fall were clear evidence of the resentment that the trees had nurtured. First, because they were imposed, since the people associate them with the figure of Murillo; and second, because their toppling seemed to anticipate the desired goal of the protests: the end of the Ortega-Murillo government. 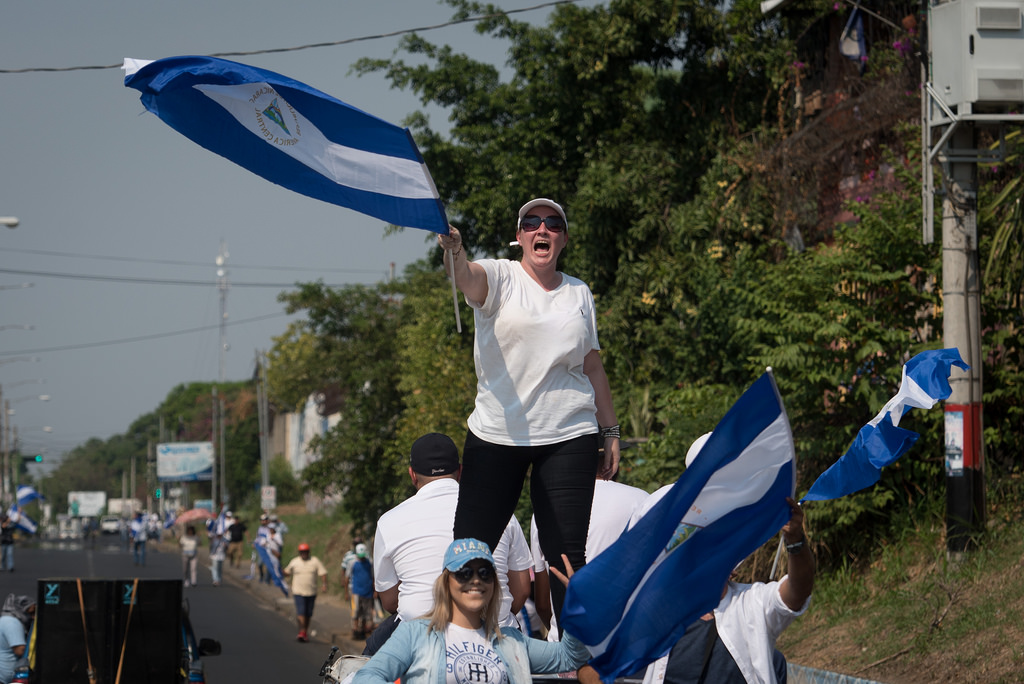 The symbol that has perhaps been most revitalized is the national flag.
Photo: Carlos Herrera /Confidencial

The streets and public places are other important symbols that people have also disputed harshly with the powers that be. The systematic and massive marches held in the principal cities of the country have stripped the government of their control of the streets. This public space had been systematically converted into their exclusive property with all the resources of force, impeding any public expression that hadn’t been approved or organized by them.

The government lost the streets on the first day; when the students protesting government negligence in combatting the forest fire in the Indio Maiz biological reserve, suddenly altered the direction of their march and headed towards a different point than the one that had been announced. They arrived at a site that had been an emblem of power: the so-called Plaza of the Victories.

The sudden decision of the young people took the government by surprise, and when they reacted, it was already to late. The young people had reached the site. The well attended marches in different cities across the country on the 23 and 28th of April, and the march held in the city of Masaya last May 6 also marked the appropriation of a space that is at the same time a symbol. People have gone out on the streets without fear, in spite of the open repression.

The same thing has occurred with numerous public places considered iconic by the government. One such example are the rotundas or roundabouts in Managua, especially the one called Jean Paul Genie, where the demonstrators have erected a public altar dedicated to the memory of the young people killed this past April. From the first days of the protests, this became a critical point. The government has ordered it destroyed several times, but each time the people once again set up the crosses, flags and posters in homage to the youth. 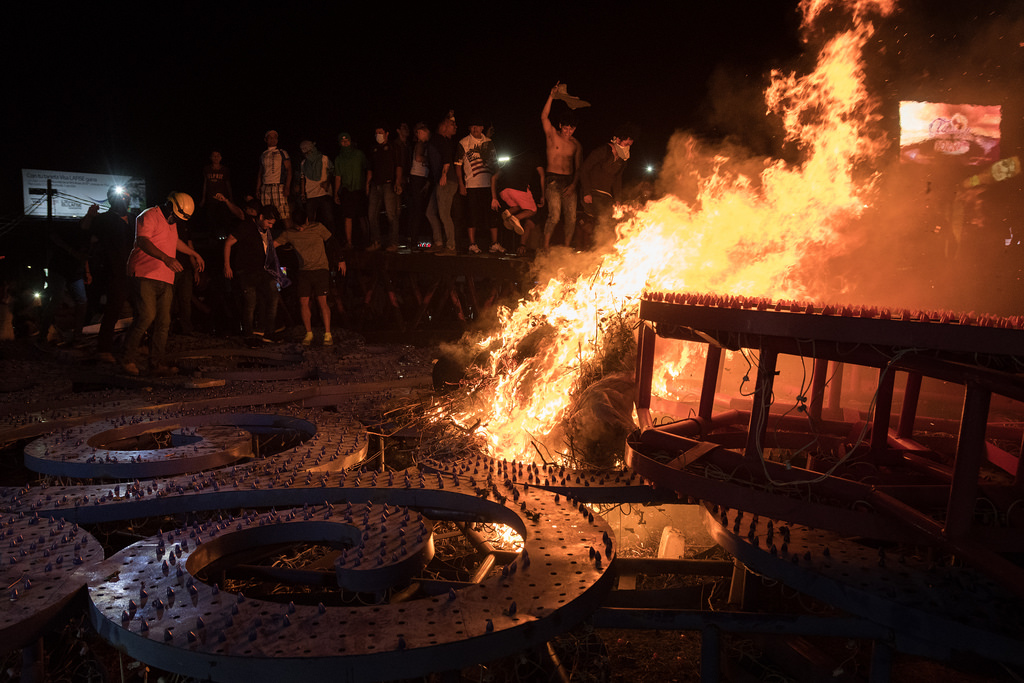 A third iconic site is the well-known indigenous sector of the city of Masaya. This neighborhood, known as Monimbo, has been historically considered a place of resistance and popular struggle. From the first days on, the people once again rose up to erect barricades and poured out into the streets to protest against the government.

The city of Niquinohomo is also considered symbolic as the birthplace of General Augusto Cesar Sandino, the figure that inspired the Sandinista struggle. Appropriated as almost personal patrimony by the vice president, the city of Niquinohomo has been one of the sites disputed most violently during the last few days. The population have insisted in painting the pedestal of a statue of Sandino in the national colors of blue and white, while the Ortega sympathizers paint it red and black. Following two large marches and police violence, the blue and white has prevailed. Sandino is no longer personal property, but a truly collective patrimony.

The slogans, the music and the colors have also been snatched away from the reigning power. Familiar historic slogans like “The people united will never be defeated” and “Long live the students!” and a large number of songs form part of the legacy that accompanied the struggle against the Somoza dictatorship. The students and the people have appropriated them anew. The national hymn, poems, and a new and abundant artistic production born of these days in April have been added as symbols, with new meaning.

Colors have acquired a special dimension and sense for the social movement. The bright pink imposed by vice president Rosario Murillo ten years ago dominates no longer, as the blue and white of the national flag has been imposed on top of it. In all of the marches, the young people pass by painting trees, signs, walls and whatever they can with the blue and white. The government itself has been forced to erase the pink from the public buildings where it predominated, repainting them in blue and white.

But the symbol that has perhaps been most revitalized is the national flag. Never until these days has the Nicaraguan flag been so predominant in all the expressions of popular mobilization. Never has Nicaraguan society wrapped itself so totally in it, in opposition to the red and black flags that the government imposed all these years as a symbol of their dominance. The red and black has disappeared from the public buildings, vehicles and other spaces where it previously had been imposed: in its place, the blue and white now waves in people’s houses, on cars, in public places, walls, signs and wherever possible. And no one feels afraid to exhibit it. Instead, there’s an enormous pride and joy in unfurling the nation’s flag.

Many other symbols have been born into the light with this unexpected and unprecedented social movement. For example, young graphic designers have elaborated a rich and attractive line of signs that uses anime style to offer homage to the young heroes of April. The social networks have also given life to a large quantity of new symbols such as signs, memes and icons. All of them, the old repurposed ones and the new ones, are a form of expression of the empowered society that has left the old symbols of power empty of meaning. Those no longer dominate us.