Morbid Researchers Imagine a ‘Best-Case Scenario’ for Nuclear War, and the Results Are Grim 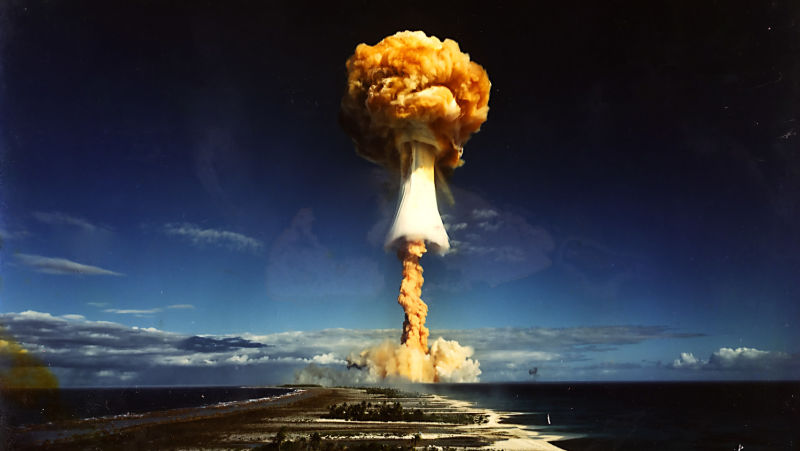 13 Jun 2018 – There are currently about 15,000 nuclear warheads on Earth—enough to blow our planet to kingdom come. It’s complete overkill, literally. But how many nukes is enough to deter an enemy? And how many nukes could an aggressor nation drop on an enemy before the effects of nuclear winter come back to haunt them? A new study tackles these grim questions, but the answers aren’t as satisfying or clear cut as the researchers would like to believe.

New research published today in the peer-reviewed journal Safety suggests no nation should possess more than 100 nuclear warheads. This is the maximum number, argue Joshua Pearce, a professor at Michigan Technological University, and David Denkenberger, an assistant professor at Tennessee State University, beyond which the blowback from a nuclear strike will affect the aggressor nation in the form of environmental, socioeconomic, and agricultural devastation, in addition to serious losses of life at home—even in the event the enemy doesn’t retaliate with its own nuclear missile strike. At the same time, the researchers say 100 nukes is still enough to ensure nuclear deterrence, effectively reducing the risk of war (and accidents), and by consequence, a catastrophic nuclear winter.

Whittling down the nuclear arsenal to tidy number like 100 sounds nice; it’s certainly the kind of number that looks good at the negotiations table. But on closer inspection this figure is actually quite arbitrary. Modern nuclear weapons, even when used in limited quantities, have the potential to wipe out entire cities and trigger calamitous environmental effects. A nuclear war, whether it’s with 100 or 1,000 nukes, will still be a horrific affair, the effects of which will be felt around the world. Ideally, the safest, most rational, and most humane number of nuclear weapons to possess is zero. 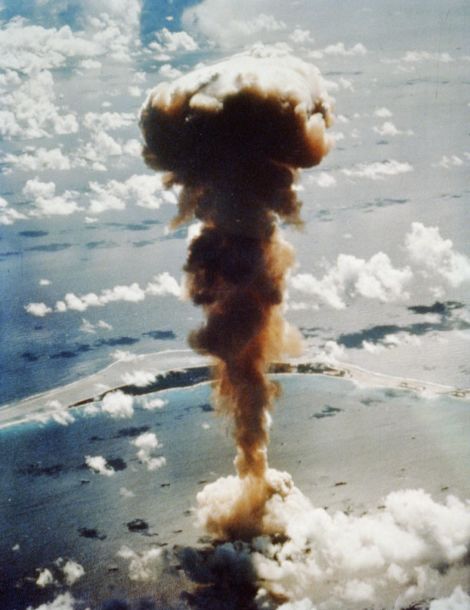 Mushroom cloud from an atomic bomb detonated at Bikini Atoll in the Pacific, 1946.
Image: United States Library of Congress/Wikimedia

Currently, the United States has 6,550 nuclear warheads, while Russia has 7,010. Add the ones owned by the United Kingdom, France, Israel, Pakistan, India, China, and North Korea, and we come to a figure just shy of 15,000. But if Pearce and Denkenberger were to have their way, this figure would drop down to 900 or fewer. That’s a total reduction of 94 percent, dropping the total number of nukes around the world by a significant margin. Fewer nuclear weapons reduces the chances of an accident, the researchers argue, while also reducing the amount of money spent on these devices. What’s more, it’s “not rational for any of these seven countries to maintain stockpiles of weapons in excess of 100 that could result in such a large potential impact on their own citizens if they were used,” the researchers write in the new paper.

Indeed, this is the very crux of the paper—to determine “the nuclear pragmatic limit where the direct physical negative consequences of nuclear weapons use are counter to national interests.” In other words, that moment when a nuclear strike comes to bite you in the ass—even if the enemy doesn’t retaliate.

“Studies that have looked at nuclear winter scenarios before concentrated primarily on a full Russia-versus-US nuclear war and asked questions like ‘could humanity survive?’,” Pearce told Gizmodo. “Studies on smaller regional wars focused on the environmental effects. This was the first study to look at only a one-sided nuclear attack and its effects, specifically on the food supply, on the aggressor assuming the absolute best-case scenario.”

By “best-case scenario,” Pearce is describing a purely hypothetical (and completely unrealistic) situation in which, in addition to not launching a retaliatory strike, the aggressor nation is not beset by ensuing terrorist attacks, mass civil unrest, minimal nuclear fallout, and the myriad other things that would follow in the wake of an unmet nuclear attack. The authors sought to determine the maximum number of nukes that could be dropped on an enemy before a nuclear winter sets in, and by consequence, instigating the collapse of trade, industry, and agriculture back home.

No doubt, we’ve all heard about the dreaded nuclear winter. As the authors write:

In addition to abnormally low temperatures, a badly damaged ozone layer would no longer block damaging UV rays. Precipitation would drop, as would global food production. Food chains and industry would become completely dysfunctional, and in some cases, non-existent.

To determine the point at which nukes present a blowback problem to the aggressor nation, the researchers calculated the effects of 7,000, 1,000, and 100 nuclear warheads dropped on a single country. The yield of each warhead was arbitrarily assigned a value of 15 kilotons (kt), a problem we’ll get to in just a bit. The authors calculated how much material would burn in each city and how much smoke would waft up into the atmosphere. Climate models were used to predict the impact on agriculture and the global food supply.

In one hypothetical scenario, if the US were to drop 100 nukes on China’s most populous cities, the initial blasts would kill an estimated 30 million people. This “regional nuclear war” would subsequently trigger a nuclear autumn, causing a one-degree Celsius temperature drop and a 10 to 20 percent drop in global food production. The resulting famines would kill scores of people in China, but American citizens would emerge largely unscathed. If the US were to drop 1,000 or 7,000 bombs on China, however, the story would be vastly different, resulting in 140,000 and five million US deaths, respectively.

“Just how damaging the use of even a modest fraction of our nuclear arsenal is on the stability of the US was shocking,” Pearce told Gizmodo. “We thought because America has so much land and so much wealth—all the more modest nuclear bombing scenarios would hardly touch us because it would only cut food supply by tens of percent. We were so wrong. The number of dead Americans from the use of our own bombs were staggering—far worse than all terrorists attacks to date combined.”

Pearce believes his analysis, because of the optimistic and conservative estimates used, severely underestimates the number of US deaths in these scenarios.

“For example, we assumed severe rationing, which is the best way to keep most people alive when there is this level of food shortage,” he said. “It means anyone that would die of starvation is immediately cut off from food. In the real world this would mean our government would be purposefully killing Americans. It is hard to estimate how a heavily armed American population would react when government agents demand they sacrifice themselves and their children so their would be enough food to feed the elite. I don’t think that would go overly smoothly—a lot more people would die in violence internally than what we estimated based on lack of calories.”

But in addition to these sweeping and unrealistic assumptions, this study suffers from another major limitation as well, which has to do with the size and power of modern nuclear weapons. As noted, this study assumes the use of 15-kiloton bombs, which actually makes little practical sense. That’s the explosive yield of the bombs dropped over Hiroshima and Nagasaki. Today’s bombs are far larger and stronger—a lot stronger. Most modern weapons are five to 25 times more powerful than the ones used in World War II, ranging from 100 to 500 kt. Currently, the largest bomb in the world is five megatons (5,000 kt), with the US’s largest at roughly 1.4 megatons (1,400 kt). It’s a tremendous stretch to believe the nuclear powers will regress to those old-timey 15 kt nukes.

A similar point was made in a study published last year in Environment Magazine. Adam Liska and his colleagues from the University of Nebraska-Lincoln showed that so-called “limited strikes,” like the ones proposed by Pearce and Denkenberger, are still likely to trigger both local and global climate effects. Frighteningly, they found that the US, Russia, and China possess weapons that can trigger a nuclear autumn with the use of fewer than five bombs. Thus, the claim that “100 nukes” is a kind of magic number loses meaning outside the context of explosive yield.

“The most sensitive parameter in these calculations is the size of the bombs, which range from ~25 kt to 5,000 kt based on today’s arsenals,” Liska told Gizmodo. “The larger bombs are the ones that really count today.”

Regardless, it’s fair to say that a reduction in nuclear stockpiles is still a smart move.

“It is simply not rational to invest billions in maintaining superfluous weapons that if ever used would destabilize our own country,” Pearce told Gizmodo. “This logic follows for everyone. Other countries are in a much worse position because they are poor, like Russia, or don’t have enough of their own land, such as Israel,” adding that “we need to take alternative food preparation more seriously and have a plan in place to feed America in the event of a nuclear war even if it has nothing to do with us (e.g. if Russia were to attack Europe). Other countries should be doing the same planning.”

Current events this week suggest North Korea is ready to give up its nukes, but it’s unclear if any other nations will follow suit. Probably not. Ideally, we’ll eventually rid ourselves of this existential blight, but complete relinquishment doesn’t seem possible or even desirable. It’s often argued that nuclear weapons, when in the possession of rational actors, are what keep the peace. That may be true, but we can’t always be sure if leaders, past or present, will continue to be rational.

George Dvorsky is a senior staff reporter at Gizmodo.