After the Singapore summit, it isn’t just wrong to say the North Korean leader is irrational — it’s dangerous. 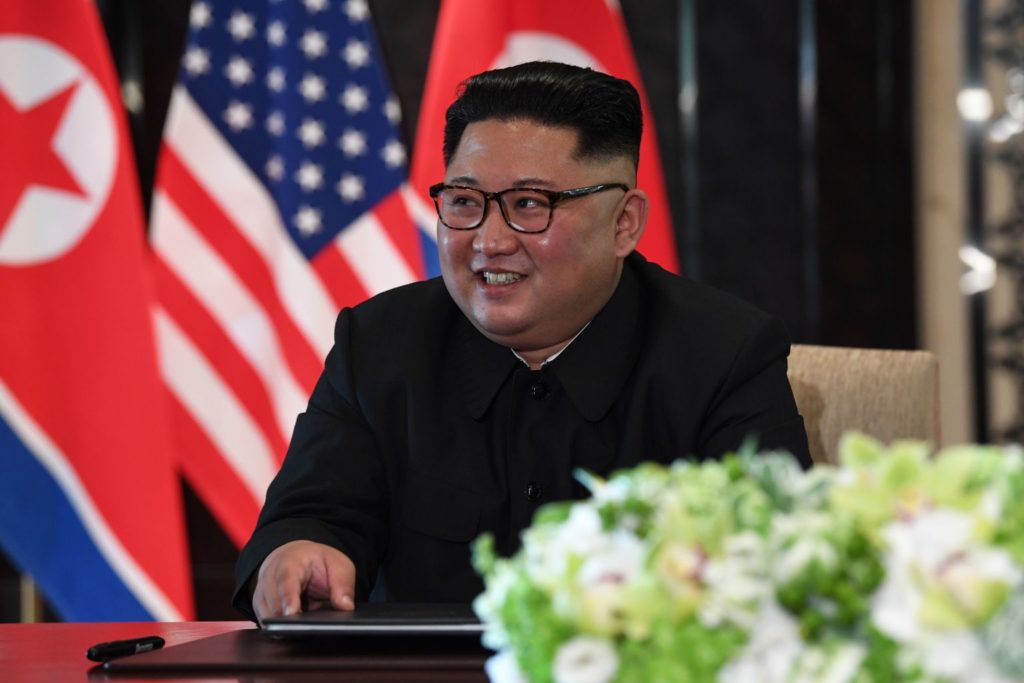 North Korea’s leader Kim Jong Un reacts at a signing ceremony with US President Donald Trump during their historic US-North Korea summit, at the Capella Hotel on Sentosa island in Singapore on June 12, 2018.
(SAUL LOEB/AFP/Getty Images)

14 Jun 2018 – The Singapore summit was long on theater and largely devoid of substance, save for a typical Trumpian giveaway. This time Donald Trump impulsively offered to suspend military exercises with South Korea (without notifying Seoul in advance) in exchange for a North Korean pledge to do … well, nothing. If the self-proclaimed master negotiator keeps making deals like this, there will be a Kim Jong Un Hilton in Honolulu before there’s a Trump Tower in Pyongyang.

The most significant development in Singapore was to complete the transformation of Kim himself from a secretive, slightly comical, definitely murderous, and possibly irrational leader of a “Hermit Kingdom” into a serious and engaged world leader of some stature. The New York Times captured this notion perfectly in an article published days before the summit, headlined “Kim Jong-un’s Image Shift: From Nuclear Madman to Skillful Leader.”

In fact, the Times’ story tells you less about Kim than it does about America’s self-defeating tendency to portray adversaries as irrational, crazy, deluded, risk-seeking, suicidal, or just plain nuts. Instead of seeing foreign-policy disputes as the product of straightforward conflicts of interest or clashing political values, even well- experienced U.S. officials and knowledgeable pundits are prone to seeing them as a reflection of personality defects, paranoia, or distorted views of reality. In truth, the Kim family has never been crazy or irrational; on the contrary, they’ve just managed to keep themselves in power in difficult circumstances for seven decades.

This tendency to see opponents as crazy has a long history. Americans saw Bolshevik leaders as irrational fanatics, and Secretary of State Edward Lansing calling Bolshevik ideology the “most hideous and monstrous thing that the human mind has ever conceived.” During the 1960s, Secretary of State Dean Rusk described Beijing’s “state of mind [as] a combination of aggressive arrogance and obsessions of its own making,” and said that “a country whose behavior is as violent, irascible, unyielding, and hostile as that of Communist China is led by leaders who view of the world and of life itself is unreal.” In the 1970s and 80s, other hard-liners suggested Soviet leaders placed so little value on human life that the ability of destroy all of the Soviet Union’s major cities and industrial centers and to kill tens of millions of Soviet citizens might not be enough to deter them from trying to “fight and win” a nuclear war.

More recently, U.S. pundits justified attacking Iraq by claiming that Saddam Hussein was an irrational, serial aggressor who could not be deterred, and advocates of war with Iran have said similar things about the clerical regime in Tehran. Former CIA director James Woolsey once described Iran’s leaders as “genocidal maniacs,” and New York Times columnist Bret Stephens (then at the Wall Street Journal) justified preventive war by describing Iran as a “martyrdom obsessed, non-Western culture.” Not to be outdone, Michael Rubin of the American Enterprise Institute suggested its leaders were not deterrable because they might “believe Islamic interests make Iran’s weathering a retaliatory nuclear strike worthwhile.” Got that? The ayatollah won’t mind dying and having the country destroyed in a nuclear attack if it helps him spread Islam.

Similarly, many Americans continue to view international terrorists as deeply disturbed, irrational, deluded, or simply crazy individuals, instead of seeing them as politically motivated, calculating, and more or less rational actors who have adopted a particular tactic (sometimes including the use of suicide bombers) because they believe (with some basis) that it offers the best chance of realizing their political aims. Some of the individual attackers may indeed by driven by wholly fictitious beliefs, but to dismiss these groups and their leaders as simply crazy underestimates their own resilience, strategic behavior, and capacity to adapt.

In a certain sense, it is not surprising that even well-informed Americans are inclined to think this way. Convinced that their own country is uniquely virtuous, exceptional, wise, and selfless, and that U.S. foreign policy is good for nearly everyone, it is easy for them believe that those who disagree with U.S. policy and question America’s motives must be suffering from some sort of mental disorder. If opponents were sane and rational and well informed, they would surely recognize the nobility of our aims and would leap to support our initiatives. President George W. Bush captured this perspective perfectly when he admitted after 9/11 that he was “amazed that people would hate us … because I know how good we are.”

Unfortunately, this tendency to treat foes as inherently irrational has real costs. For starters, if an enemy is truly irrational or crazy, then this implies that they will not be intimidated by America’s obvious military superiority and the usual strategies of deterrence may not work. If that is the case, then preventive war becomes a more attractive option. As noted above, this is precisely what happened in the case of Iraq and has been a key part of the hawks’ recipe for military action against Iran. Those who have favored military strikes against North Korea — including National Security Advisor John Bolton — have made similar arguments about Kim (before the latter’s recent transformation from “madman” to “statesman”).

Second, attributing an adversary’s behavior to various forms of irrationality can blind us to the real reasons behind their behavior. Americans sometimes view the pursuit of weapons of mass destruction by states like North Korea, Iran, or Libya as some sort of wild aberration, or as evidence of deeply malign intent. In this view, it is simply crazy for a poor country like North Korea to devote vast resources to developing nuclear weapons, and it just shows you how bizarre, paranoid, and dangerous the Kim family is. But all of these states had legitimate reason to worry about foreign attack, and therefore some basis for wanting a reliable deterrent. (And if the mighty United States thinks it needs thousands of nukes to be safe, it is not hard to see why these far weaker states might see them as a useful insurance policy.) Moreover, as Kim has just proven (again!), having an actual working nuclear bomb turns out to be a pretty good way of getting Washington’s attention and even a certain degree of respect.

Third, if an opponent is crazy, irrational, or wildly misinformed, one cannot expect them to respond sensibly to carrots, sticks, or reasoned arguments. The belief that the other side is unreasonable, or even worse, incapable of reason, makes normal diplomacy seem like a waste of time. What’s the point of talking to a crazy person or a crazy regime? Exaggerating an enemy’s irrationality thus makes it more likely that potential positive diplomatic deals won’t even be contemplated, let alone attempted.

And while we’re talking about perceived irrational behavior, Americans might want to be a bit more self-reflective. We like to portray our enemies as irrational and foolhardy, but we’ve been guilty of no small amount of crazy behavior ourselves. Reasonable people can disagree about the net costs and benefits of NATO expansion, for example, but it was pretty crazy to think the United States could keep moving NATO eastward without severely damaging relations with Moscow. Yet proponents kept insisting that Moscow wouldn’t object, or that its objections were insincere or ill-founded. It was positively delusional for Americans to think that invading Iraq would quickly produce a stable, prosperous, pro-American democracy, and ignite a broad process of democratization throughout the region, but a lot of smart people bought that line back in 2002 and 2003. It was equally foolish to think that toppling Muammar al-Qaddafi or demanding “Assad must go” would have salutary effects in either Libya or Syria, yet top officials convinced themselves that this was in fact the case. And if the definition of insanity is doing the same thing over and over yet expecting a different result, what does U.S. policy in Afghanistan tell you about the “rationality” of our political and military leaders?

Lastly but by no means least, what are other states to make of a president who can’t get through a day without telling a bald-faced lie (or several), insults the leaders of our closest allies not just once but repeatedly, and who changes course so frequently that neither friends nor foes can be confident that an agreement reached today will be abided tomorrow. Unlike some of his critics, I don’t think President Trump is crazy or in the early stages of dementia (although reading the clinical description of narcissistic personality disorder is more than a little worrisome). But based on his performance thus far, it’s easy to see why major world leaders might conclude that there was no point in trying to accommodate, mollify, appeal to, or compromise with a leader as capricious and vindictive as Trump. Kim Jong Un seems to have demonstrated that one gets more respect from Trump by defying him than by trying to get along. If other leaders reach the same conclusion, they will devote less effort to remaining on good terms with the United States and concentrate instead on building cooperative arrangements with each other.

At this point, they’d be crazy not to.

Stephen M. Walt is the Robert and Renée Belfer professor of international relations at Harvard University.