Palestine Is Not Occupied, It Is Colonized

Israel has already, and repeatedly, violated most conditions of what constitute an ‘Occupation’ from an international law perspective. 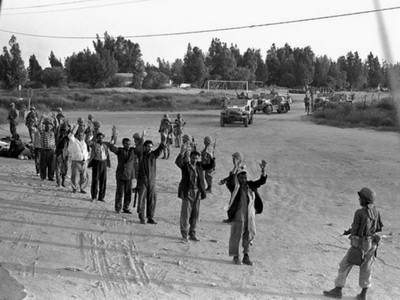 The unsurprising death of the ‘peace process’ and the inevitable demise of the ‘two-state solution’ has shifted the focus from ending the occupation per se to the larger, and more encompassing, problem of Israel’s colonialism throughout Palestine.

The unsurprising death of the ‘peace process’ and the inevitable demise of the ‘two-state solution’ has shifted the focus from ending the Occupation per se, to the larger and more encompassing problem of Israel’s colonialism throughout Palestine.

In some sense, the ‘Israeli occupation’ is no longer an occupation as per international standards and definitions. It is merely a phase of the Zionist colonization of historic Palestine, a process that began over a 100 years ago, and carries on to this day.

“The law of occupation is primarily motivated by humanitarian consideration; it is solely the facts on the ground that determine its application”, states the International Committee of the Red Cross website.

It is for practical purposes that we often utilize the term ‘occupation’ with reference to Israel’s colonization of Palestinian land, occupied after 5 June 1967. The term allows for the constant emphasis on humanitarian rules that are meant to govern Israel’s behavior as the occupying power.

However, Israel has already, and repeatedly, violated most conditions of what constitutes an ‘occupation’ from an international law perspective, as articulated in the 1907 Hague Regulations (articles 42-56) and the 1949 Fourth Geneva Convention.

According to these definitions, an ‘occupation’ is a provisional phase, a temporary situation that is meant to end with the implementation of international law regarding that particular situation.

It is often argued that Israel is an occupier that has violated the rules of occupation as stated in international law.

This would have been the case a year, two or five years after the original occupation had taken place, but not 51 years later. Since then, the occupation has turned into long-term colonization.

An obvious proof is Israel’s annexation of occupied land, including the Syrian Golan Heights and Palestinian East Jerusalem in 1981. That decision had no regard for international law, humanitarian law or any other law.

Israeli politicians have, for years, openly debated the annexation of the West Bank, especially areas that are populated with illegal Jewish settlements, which are built contrary to international law.

Those hundreds of settlements that Israel has been building in the West Bank and East Jerusalem are not meant as temporary structures.

Dividing the West Bank into three zones, areas A, B and C, each governed according to different political diktats and military roles, has little precedent in international law.

Israel argues that, contrary to international law, it is no longer an occupying power in Gaza; however, an Israel land, maritime and aerial siege has been imposed on the Strip for over 11 years. From successive Israeli wars that have killed thousands, to a hermetic blockade that has pushed the Palestinian population to the brink of starvation, Gaza subsists in isolation.

Gaza is an ‘occupied territory’ by name only, without any of the humanitarian rules applied. In the last 10 weeks alone, over 120 unarmed protesters, journalists, and medics were killed and 13,000 wounded, yet the international community and law remain inept, unable to face or challenge Israeli leaders or to overpower equally cold-hearted American vetoes.

The Palestinian Occupied Territories have, long ago, crossed the line from being occupied to being colonized. But there are reasons that we are trapped in old definitions, leading amongst them is American political hegemony over the legal and political discourses pertaining to Palestine.

One of the main political and legal achievements of the Israeli war – which was carried out with full US support – on several Arab countries in June 1967 is the redefining of the legal and political language on Palestine.

Prior to that war, the discussion was mostly dominated by such urgent issues as the ‘Right of Return’ for Palestinian refugees to go back to their homes and properties in historic Palestine.

The June war shifted the balance of power completely and cemented America’s role as Israel’s main backer on the international stage.

Several UN Security Council resolutions were passed to delegitimize the Israeli occupation: UNSCR 242, UNSCR 338, and the less talked about but equally significant UNSCR 497.

Resolution 242 of 1967 demanded “withdrawal of Israel armed forces” from the territories it occupied in the June war. Resolution 338, which followed the war of 1973, accentuated and clarified that demand. Resolution 497 of 1981 was a response to Israel’s annexation of the Golan Heights. It rendered such a move “null and void and without international and legal effect”.

The same applied to the annexation of Jerusalem as to any colonial constructions or any Israeli attempts aimed at changing the legal status of the West Bank.

But Israel is operating with an entirely different mindset.

Considering that anywhere between 600,000 to 750,000 Israeli Jews now live in the ‘Occupied Territories’, and that the largest settlement of Modi’in Illit houses more than 64,000 Israeli Jews, one has to wonder what form of military occupation blue-print Israel is implementing, anyway?

Israel is a settler colonial project, which began when the Zionist movement aspired to build an exclusive homeland for Jews in Palestine, at the expense of the native inhabitants of that land in the late 19th century.

Nothing has changed since. Only facades, legal definitions, and political discourse. The truth is that Palestinians continue to suffer the consequences of Zionist colonialism and they will continue to carry that burden until that original sin is boldly confronted and justly remedied.

One Response to “Palestine Is Not Occupied, It Is Colonized”