The West Is Turning a Blind Eye to the Gaza Massacre 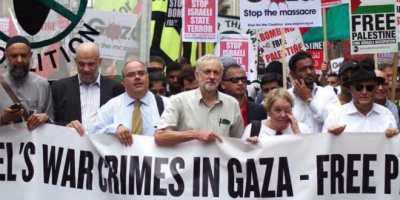 5 Jun 2018 – I have asked for this statement to be read out at this evening’s Right of Return demonstration in London for justice for the Palestinian people:

In recent weeks, scores of unarmed Palestinian civilians have been killed in Gaza by Israeli forces. Hundreds have been wounded. Most are refugees or the families of refugees from what is now Israel, and they have been demonstrating for their right to return, week after week.

The killing of Razzan Najjar, the 22 year old medical volunteer shot by an Israeli sniper in Gaza on Friday, is the latest tragic reminder of the outrageous and indiscriminate brutality being meted out, under orders from the Netanyahu government.

The silence, or worse support, for this flagrant illegality, from many western governments, including our own, has been shameful.

Instead of standing by while these shocking killings and abuses take place, they should take a lead from Israeli peace and justice campaigners: to demand an end to the multiple abuses of human and political rights Palestinians face on a daily basis, the 11-year siege of Gaza, the continuing 50-year occupation of Palestinian territory and the ongoing expansion of illegal settlements.

President Trump’s decision to recognise Jerusalem as Israel’s capital city, and move the US embassy there, in violation of international agreements, has demonstrated that the US has no claim to be any kind of honest broker for a political settlement of the Israel-Palestine conflict.

A sustainable, just peace between Israelis and Palestinians, that recognises the rights and security of all, and puts an end to the continuing dispossession of the Palestinian people, is an interest we all share, in the Middle East and far beyond.

We cannot turn a blind eye to these repeated and dangerous breaches of international law. The security of one will never be achieved at the expense of the other. And that is why we are committed to reviewing UK arms sales to Israel while these violations continue.

The UK Government’s decision not to support either a UN Commission of Inquiry into the shocking scale of killings of civilian protesters in Gaza, or the more recent UN resolution condemning indiscriminate Israeli use of force – and calling for the protection of Palestinians – is morally indefensible.

Britain, which is a permanent UN security council member and has a particular responsibility for a peaceful and just resolution of the Israel-Palestine conflict, should ensure there is a credible independent investigation, genuine accountability and effective international action to halt the killings – and bring Gaza’s ever-deepening humanitarian crisis to an end.