Are al-Qaeda Affiliates Fighting Alongside U.S. Rebels in Syria’s South?

If forced to choose, Israel prefers the presence of terrorist groups to Iranian influence. 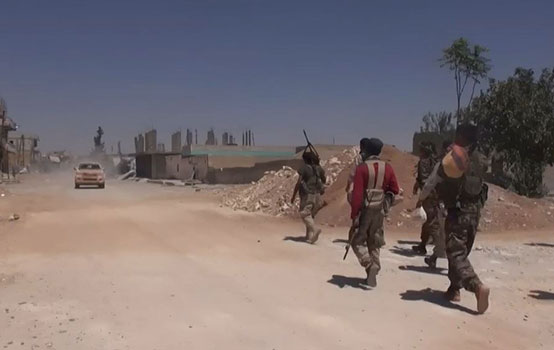 25 Jun 2018 – At first glance, all appears calm in this southern Syrian city where protests first broke out seven years ago. Residents mill around shops in preparation for the evening Iftar meal when they break their daily fast during the holy month of Ramadan.

But the tension is nonetheless palpable in this now government-controlled city. A few weeks ago, Russian-brokered reconciliation talks in southern Syria fell apart when Western-backed militants rejected a negotiated peace.

Whether there will now be a full-on battle for the south or not, visits last week to Syria’s three southern governorates, Daraa, Quneitra, and Suweida, reveal a startling possibility: al-Qaeda’s Syrian franchise—the Nusra Front—appears to be deeply entrenched alongside these U.S.-backed militants in key, strategic towns and villages scattered throughout the south.

U.S. media and think tanks obfuscate this fact by referring to all opposition fighters as “rebels” or “moderates.” Take a look at their maps and you only see three colors: red for the Syrian Arab Army (SAA) and its allies, green for opposition forces, black for ISIS.

Related:
No More Utopian Dreams on Syria
War without a Rationale

So then, where is the Nusra Front, long considered by Western pundits to be one of the most potent fighting forces against the SAA? Have they simply—and conveniently—been erased from the Syrian battle map?

Discussions with Syrian military experts, analysts, and opposition fighters during my trip revealed that Nusra is alive and kicking in the southern battlefields. The map below specifically identifies areas in the south controlled by Nusra, but there are many more locations that do not appear where Nusra is present and shares power with other militants. 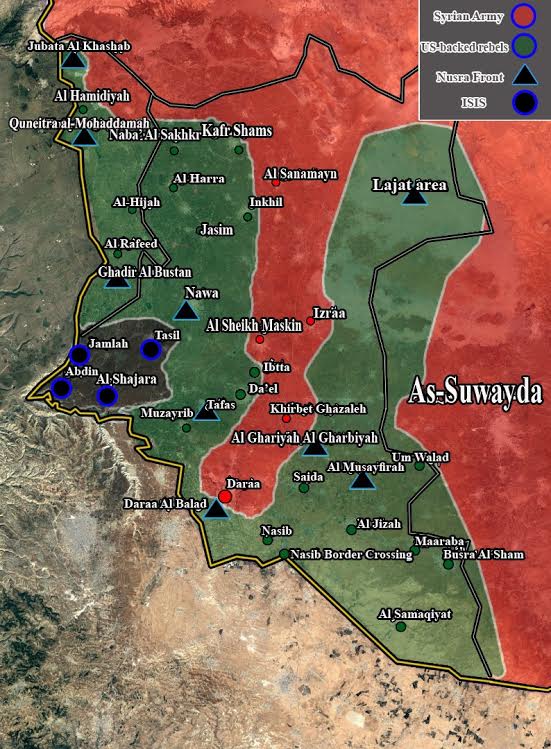 Despite its U.S. and UN designation as a terrorist organization, Nusra has been openly fighting alongside the “Southern Front,” a group of 54 opposition militias funded and commanded by a U.S.-led war room based in Amman, Jordan called the Military Operations Center (MOC).

Specifics about the MOC aren’t easy to come by, but sources inside Syria—both opposition fighters and Syrian military brass (past and present)—suggest the command center consists of the U.S., UK, France, Jordan, Israel, and some Persian Gulf states.

They say the MOC supplies funds, weapons, salaries, intel, and training to the 54 militias, many of which consist of a mere 200 or so fighters that are further broken down into smaller groups, some only a few dozen strong.

SAA General Ahmad al-Issa, a commander for the frontline in Daraa, says the MOC is a U.S.-led operation that controls the movements of Southern Front “terrorists” and is highly influenced by Israel’s strategic goals in the south of Syria—one of which is to seize control of its bordering areas to create a “buffer” inside Syrian territories.

How does he know this? Issa says his information comes from a cross-section of sources, including reconciled/captured militants and intel from the MOC itself. The general cites MOC’s own rulebook for militants as an example of its Israel-centricity: “One, never threaten or approach any Israeli border in any way. Two, protect the borders with (Israeli-occupied) Golan so no one can enter Israel.”

To illustrate the MOC’s control over southern militants, Issa cites further regulations: “three, never take any military action before clearing with MOC first. Four, if the MOC asks groups to attack or stop, they must do so.”

What happens if these rules are not upheld? “They will get their salaries cut,” says Issa.

The armed opposition groups supported by the MOC are mostly affiliated with the Free Syrian Army (FSA), itself an ill-defined, highly fungible group of militants who have changed names and affiliations with frequency during the Syrian conflict.

Over the course of the war, the FSA has fought alongside the Nusra Front and ISIS—some have even joined them. Today, despite efforts to whitewash the FSA and Southern Front as “non-sectarian” and non-extremist, factions like the Yarmouk Army, Mu’tazz Billah Brigade, Salah al-Din Division, Fajr al-Islam Brigade, Fallujah al-Houran Brigade, the Bunyan al-Marsous grouping, Saifollah al-Masloul Brigade, and others are currently occupying keys areas in Daraa in cooperation with the Nusra Front.

None of this is news to American policymakers. Even before the MOC was established in February 2014, Nusra militants were fronting vital military maneuvers for the FSA. As one Daraa opposition activist explains: “The FSA and al-Nusra join together for operations but they have an agreement to let the FSA lead for public reasons, because they don’t want to frighten Jordan or the West…. Operations that were really carried out by al-Nusra are publicly presented by the FSA as their own.”

Efforts to conceal the depth of cooperation between Nusra and the FSA go right to the top. Says one FSA commander in Daraa: “In many battles, al-Nusra takes part, but we don’t tell the (MOC) operations room about it.”

It’s highly doubtful that the U.S. military remains unaware of this. The Americans operate on a “don’t ask, don’t tell” basis with regard to FSA-Nusra cooperation. In a 2015 interview with this reporter, CENTCOM spokesman Lieutenant Commander Kyle Raines was quizzed about why Pentagon-vetted fighters’ weapons were showing up in Nusra hands. Raines responded: “We don’t ‘command and control’ these forces—we only ‘train and enable’ them. Who they say they’re allying with, that’s their business.”

In practice, the U.S. doesn’t appear to mind the Nusra affiliation—regardless of the fact that the group is a terror organization—as long as the job gets done.

U.S. arms have been seen in Nusra’s possession for many years now, including highly valued TOW missiles, which were game-changing weapons in the Syrian military theater. When American weapons end up in al-Qaeda hands during the first or second year of a conflict, one assumes simple errors in judgment. When the problem persists after seven years, however, it starts to look like there’s a policy in place to look the other way.

It’s also not difficult to grasp why U.S. maps patently ignore evidence of Nusra embedded among U.S.-supported militias. The group, after all, is exempt from ceasefires, viewed as a fair target for military strikes at all times.

In December 2015, UN Security Council Resolution 2254 called for “Member States to prevent and suppress terrorist acts committed specifically by Islamic State in Iraq and the Levant (ISIL, also known as Da’esh), Al-Nusra Front (ANF), and all other individuals, groups, undertakings, and entities associated with Al Qaeda or ISIL, and other terrorist groups, as designated by the Security Council” (emphasis added). Furthermore, the resolution makes clear that ceasefires “will not apply to offensive or defensive actions against these individuals, groups, undertakings and entities.”

This essentially means that the Syrian army and its allies can tear apart any areas in the south of Syria where Nusra fighters—and “entities associated” with it—are based. In effect, international law provides a free hand for a Syrian military assault against U.S.-backed militias co-located with Nusra, and undermines the ability of their foreign sponsors to take retaliatory measures.

That’s why the Nusra Front doesn’t show up on U.S. maps.

In an interview last week, Syrian president Bashar al-Assad blamed the sudden breakdown of southern reconciliation efforts on “Israeli and American interference,” which he says “put pressure on the terrorists in that area in order to prevent reaching any compromise or peaceful resolution.”

Today, the Israeli border area with Syria is dotted with Nusra and ISIS encampments, which Israel clearly prefers over the Syrian army and its Iranian and Hezbollah allies. The Wall Street Journal even reported last year that Israel was secretly providing funding for salaries, food, fuel, and munitions to militants across its border.

In early June, two former Islamist FSA members (one of them also a former Nusra fighter) in Beit Jinn—a strategic area bordering Syria, Lebanon, and Israel—told me that Israel had been paying their militia’s salaries for a year before a reconciliation deal was struck with the Syrian government. “Every month Israel would send us $200,000 to keep fighting,” one revealed. “Our leaders were following the outside countries. We were supported by MOC, they kept supporting us till the last minute,” he said.

Earlier that day, in the village of Hadar in the Syrian Golan, members of the Druze community described a bloody Nusra attack last November that killed 17: “All the people here saw how Israel helped Nusra terrorists that day. They covered them with live fire from the hilltops to help Nusra take over Hadar. And at the end of the fights, Israel takes in the injured Nusra fighters and provides them with medical services,” says Marwan Tawil, a local English teacher.

“The ceasefire line (Syrian-Israeli border) is 65 kilometers between here to Jordan, and only this area is under the control of the SAA,” explains Hadar’s mayor. “Sixty kilometers is with Nusra and Israel and only the other five are under the SAA.”

Israel is so heavily vested in keeping Syria and its allies away from its borders, it has actively bolstered al-Qaeda and other extremists in Syria’s southern theater. As Israeli Defense Minister Moshe Ya’alon famously explained in 2016, “In Syria, if the choice is between Iran and the Islamic State, I choose the Islamic State.” To justify their interventions in the battle ahead, the U.S. and Israel claim that Iranian and Hezbollah forces are present in the south, yet on the ground in Daraa and Quneitra, there is no visible sight of either.

Multiple sources confirm this in Daraa, and insist that that there are only a handful of Hezbollah advisors—not fighters—in the entire governorate.

So why the spin? “This is a public diplomacy effort to make the West look like they’ve forced Iran and Hezbollah out of the south,” explains General Issa.

The U.S., Israel, and their allies cannot win this southern fight. They can only prolong the insecurity for a while before the SAA decides to launch a military campaign against the 54-plus-militias-Nusra occupying the south of Syria. The end result is likely to be a negotiated settlement peppered with a few “soft battles” to eject the more hardline militants.

As one SAA soldier on the scene in Daraa tells me: “Fifty-four factions in a small area shows weakness more than it shows strength.” And their cooperation with the Nusra Front just makes the targets on their backs even larger.

Sharmine Narwani is a commentator and analyst of Mideast geopolitics based in Beirut.