Ducking Hell: The Shocking Video Revealing How We Farm Ducks in Australia

Shocking footage of duck farming in Australia has emerged showing day-old ducklings being dropped into an industrial shredder, adult ducks being kicked and thrown around a barn by workers, and ducks which should have been stunned before slaughter hanging by their feet on a conveyor belt while they bleed to death after having their throats slit.

11 Jun 2018 – The footage, depicted at the bottom of this story, was secretly filmed across three farm sites – two in Victoria and one in NSW – earlier this year. It was provided anonymously to Animal Liberation NSW and captures the entire farming process, from birth to death. Laws in NSW (and to a lesser extent Victoria) prohibit filming and distributing images of animal cruelty captured inside farms. The footage was provided to Animal Liberation NSW anonymously, but the provenance of the locations has been confirmed.

Adult ducks can be seen stumbling around barns crowded with thousands of other birds, many of them too weak to hold their own body weight after having lived a life never exposed to water. Some have deformed beaks, wings and feet, and some have gone blind or lost eyes. There is barely any natural light in the barns featured in the video. 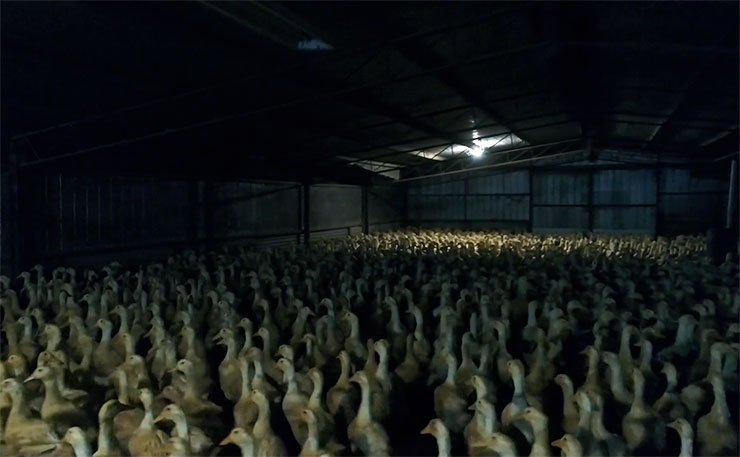 Animal rights activists say that the sheds are not cleaned for the entire 7-week cycle, making disease and fatalities common, and causing burns on the ducks’ feet. In one scene, the floor of one of the barns is virtually alive with maggots and insects, with corpses of ducklings and adult ducks filmed throughout the facilities.

Once their seven week growth cycle inside a crowded, dry barn is complete, the ducks are thrown into large crates and shipped by truck for slaughter.

The footage shows what happens at the slaughter house – ducks are thrown around by their necks and then hung upside down by their feet onto an automated shackle line. Their heads are dragged through electrified water, which is supposed to stun them before their throats are slit. However, numerous ducks can be seen flailing wildly, upside down, while the conveyor belt continues. They’re not stunned, but slowly bleeding to death. 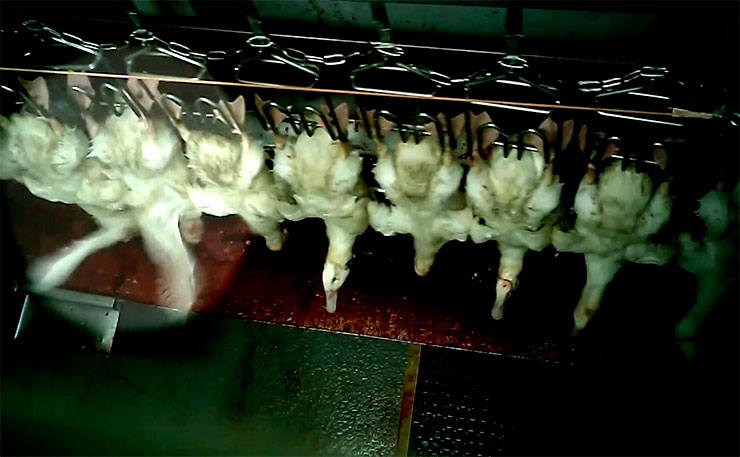 Ducks are hung upside on a conveyer belt, then lowered into electrified water to stun them, before having their throats slit. A substantial number of ducks are never stunned.

By far the most distressing footage is what duck farms do with ducklings born with deformities.

From birth, they are simply dropped alive into a ‘macerator’ – a large, industrial shredder – along with the remnants of egg shells. The practice is common in the poultry industry but this is the first time footage has emerged in Australia of baby ducks also being ‘macerated’. 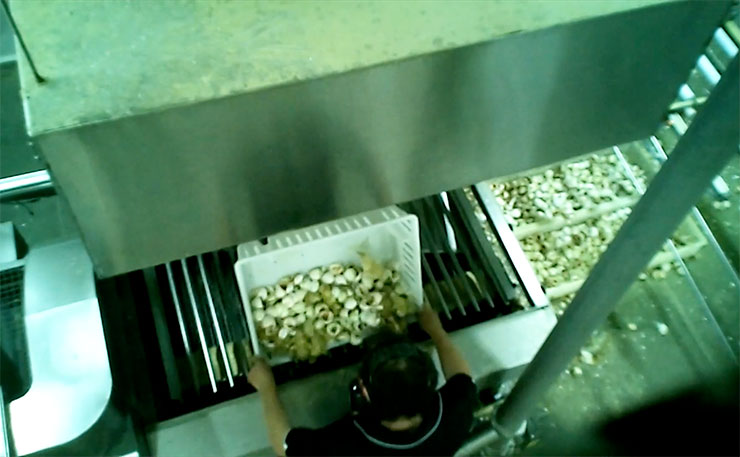 Ducklings born with deformities are immediately dropped alive into a ‘macerator’ along with egg shells, which then shreds them alive. 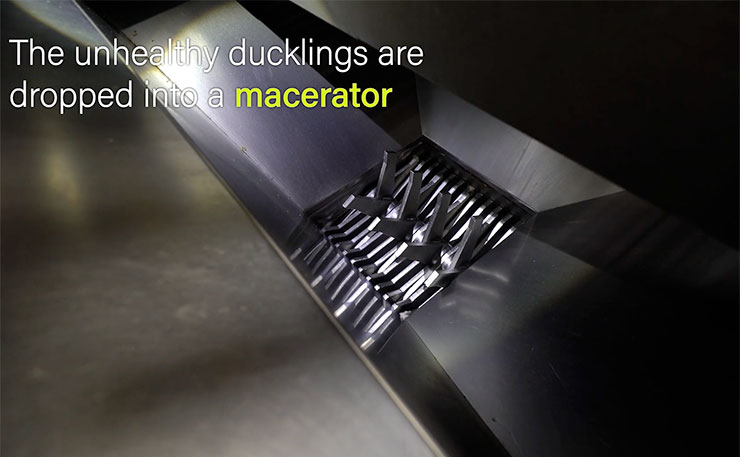 A macerator at a NSW farm, which shreds newly born ducklings alive.

Around 9 million ducks are farmed and slaughtered in Australia every year. The industry is worth more than $100 million annually.

“It’s the same as the egg industry – the grinding up of the unprofitable. If ducklings are born deformed they’re killed by being ground up alive,” Mr Vince said.

“We’ve been running an ongoing campaigns for ducks, but there’s been no improvement in the way their flesh is produced for decades. The government recently staged a poultry welfare review, but nothing has improved for ducks.”

That review – due to report later this month – looks at the complete farming process, but in particular weighs into the issue of Australian farmed ducks having no access to open water.

Mr Vince says it’s one of the cruelest aspects of the practice in Australia.

“Ducks are aquatic animals, with naturally weak leg and thigh joints, yet they’re farmed without access to water for swimming, bathing or even dipping their heads.

“Many struggle to remain upright on land for so long. This often leads to lameness, dislocated joints and broken bones.”

A submission to the poultry review – prepared by the industry’s Poultry Standards and Guidelines Drafting Group – acknowledges the problems associated with ducks reared without access to water, but ultimately recommends against it.

“More recent behavioural research has indicated that Pekin Ducks have a strong instinctive behaviour to dabble with surface water and undertake behaviours to immerse the beak and head in surface water,” it notes.

“Some studies have shown ducks have shown a preference for open water without prior experience, and have worked to obtain access to open water, indicating an innate need. 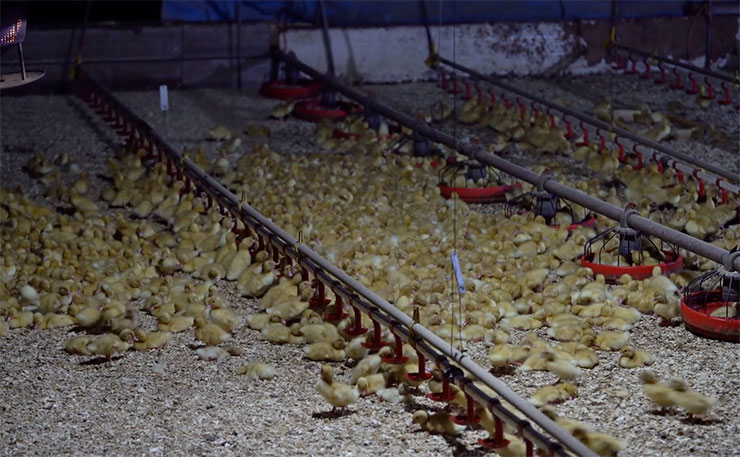 One of the barns depicted in the video, which shows ducklings’ limited access to water, in poorly lit barns.

“Water is required for ducks to perform many species-specific behaviours such as head dipping, wet preening, wing rubbing, and shaking movements. Surface water and the provision of water immersion systems bring management challenges that impact on shed hygiene and litter conditions, and need to be managed precisely to achieve good health and production outcomes.”

The submission also discusses possible solutions in Australia, but despite the research, ultimately concludes that ducks don’t need access to open water.

“[A study in 2002] suggested some practical solutions to the problems of supplying ducks with open water. The water could be surrounded with plastic slats and the water could be cleaned and re-used, possibly using biofilters.

“[A study in 2004] described equipment for continuous cleaning of the bathing/dabbling water which provides a satisfactory hygienic quality of the water. However, water loss during the cleaning process was considerable, as well as labour demands and costs. 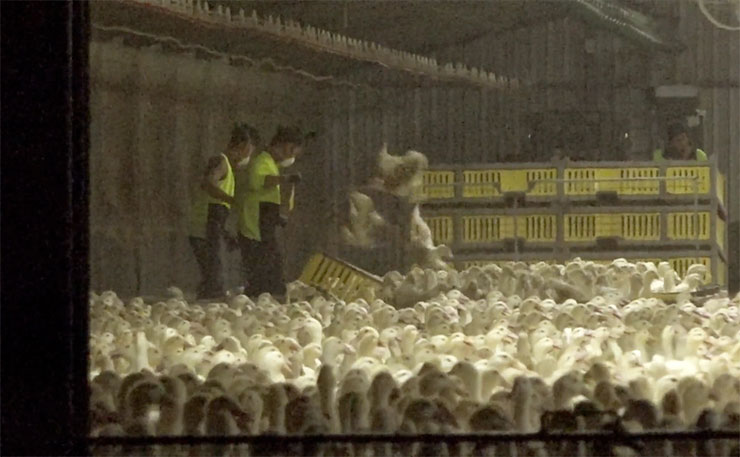 Ducks ready for slaughter are thrown around a barn as they’re herded into crates.

“[In 2015, a study] examined the… responses of Muscovy Ducks to deprivation of a swimming pool. This study indicated that… it had no effect on the duck’s behaviour (except feather pecking), performance, carcass characteristics and blood parameters of the experimental duckling.

“[The study] concluded a swimming pool is not essential at any stage of duck rearing.

“Surface water pondage is not an option due to biosecurity risks and effluent releases to the environment pose a significant constraint to farm establishment.”

The submission notes that while there is no requirement in Australia for ducks to have access to open water, “RSPCA Australia recommends that ducks are given access to water facilities to carry out their natural water-related behaviours.”

Activists who seek to film animal cruelty face a raft of legislation around the country designed to curb their actions, in particular provisions under state and federal surveiollance acts.

However, NSW has by far the strictest laws, with a Biosecurity Act introduced in 2015 specifically targeted at animal rights activists to enable prosecutions, with fines of up to $1.1 million, and up to three years in jail.

The laws were introduced by the Baird government, and claimed that animal rights activists who illegally entered farms risked introducing diseases.

At the time, then federal Agriculture minister and deputy prime minister Barnaby Joyce supported the legislation and called for a national approach.

“People who illegally enter farms and conduct unlawful surveillance not only cause distress to farmers and animals, they disrupt vital business practices and can even injure or kill animals, causing widespread production losses,” Mr Joyce said.

“Farm trespass can also potentially spread devastating diseases, and puts at risk the lawful practices of our world-leading farmers right across Australia.

“Let’s be clear – to break and enter is a crime and all farmers have the right to be protected against unauthorised persons on their property.” 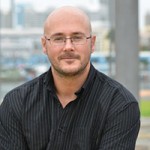 Chris Graham is the publisher and editor of New Matilda. He is the former founding managing editor of the National Indigenous Times and Tracker magazine. Chris has won a Walkley Award, a Walkley High Commendation and two Human Rights Awards for his reporting. He lives in Brisbane and splits his time between Stradbroke Island, where New Matilda is based, and the mainland.