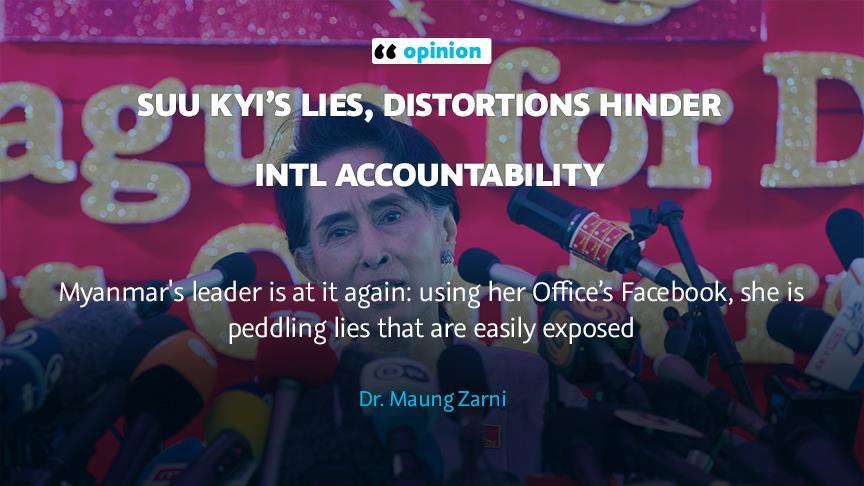 Myanmar’s leader is at it again: using her Office’s Facebook, she is peddling lies that are easily exposed.

24 Jun 2018 – Aung San Suu Kyi, the Nobel laureate, Myanmar state counsellor, and foreign minister, is at it again: using her office’s Facebook page, she is peddling lies that are easily exposed.

Her growing list of provable distortions and denials must not go unchallenged.

Among them are her latest spin — “hate-narratives-from-outside-Myanmar” as a splitter of communities in the country — her complete denial of the well-documented state policies of Rohingya persecution, presenting the military’s genocidal persecution of Rohingya as if it were a communal conflict of moral equals, or using the global rhetoric of “terrorism” as the cause behind the deteriorating crisis in northern Rakhine state.

As a student of Myanmar affairs with 30 consecutive years of firsthand political involvement, I don’t know how many times I have experienced a sense of deja vu.

That is, whenever I hear a national leader, civilian or general utter a blatant lie that can easily be proven factually untrue.

One of the benefits of having lived as a Burmese under the military rule of the late despot Gen. Ne Win for 25 years (1963-88) is that one develops an acute – and accurate – sense of detecting lies, even where they are delivered in sophisticated policy language designed to deceive target audiences, such as a sympathetic home crowd or the diplomatic community.

It is the moral cowardice that often compels politicians and policy-makers to tell such lies that caused me to turn my back on the then-opposition icon – Aung San Suu Kyi – as early as 2004, when the world was still delusional about her (falsely presumed) moral and political leadership.

So, I no longer expect wholly truthful pronouncements from the Nobel Peace laureate.

But still, the issuance of the latest official statement on the Myanmar state counsellor’s Facebook page (20 June 2018) apportioning blame for the divided faith-based communities and racial and religious tensions on the “hate narratives from outside (Myanmar),” sets off my made-in-old-Burma lie detector.

Myanmar generals have, for the last 56 years, shown that they will stop at nothing to perpetuate their tight grip on power, populations, and economy at home. Likewise, Myanmar’s first female autocrat will stop at nothing in order to maintain working relations with the military, who occupy real power.

Indeed, her conciliatory collaboration with the military shows no limits.

Whatever the instrumentalist logic behind Suu Kyi’s collaboration – keeping the military partners adequately satisfied so that she could potentially push her altruistic reform agenda, or simply keeping herself above-the-president again in the next election cycle (2020-25) – what Suu Kyi needs reminding of are lines one never ought to cross.

Former supporter and fellow Nobel Laureate Desmond Tutu reminded her of those lines publicly months ago. But she is showing no sign that she will heed any ethical voice of reason or compassion. She is most definitely drawing no such line.

To the contrary, she embraces untruths with regards to the situation in Rakhine, which has come to be seen as the product of genocide, crimes against humanity, or “ethnic cleansing.”

In her official meeting with Christine Schraner Burgener, the UN secretary-general’s special envoy on Myanmar, Suu Kyi told the visiting diplomat that “the hate narratives from outside the country have driven the two communities [or Muslims and Buddhists in Rakhine] further apart.”

Here are the facts: Years before the invention of Facebook — through which the hate narratives were purveyed in Myanmar, either from outside the country or domestically — Myanmar’s military was known to be engaged in spreading anti-Muslim racism in our predominantly Buddhist society.

In fact, in his “Challenging the Authoritarian State: Buddhist Monks and Peaceful Protests in Burma, Issues and Policy” (The Fletcher Forum of World Affairs, 2008), Kyaw Yin Hlaing, an ex-academic and former adviser to President Thein Sein (2010-15), observed the military’s central role in inciting anti-Muslim riots in the past:

“In 1997, the junta became aware of the monks’ plan to protest against the regional (military) commander’s improper renovation of a famous Buddhist statue in Mandalay.

Before the monks could launch the protests, a rumour emerged that a Buddhist woman had been raped by a Muslim businessman.

The government diverted their attention from the regional commander to the Muslim businessman, eventually causing an anti-Muslim riot. Some observers noted that that intelligence agents often instigate anti-Muslim riots in order to prevent angry Buddhist monks from engaging in anti-government activities.” (pp. 137-138)

Journalist Andrew Marshall wrote, “The Buddhist extremist movement in Myanmar, known as 969, portrays itself as a grassroots creed. Its chief proponent, a monk named Wirathu, was once jailed by the former military junta for anti-Muslim violence and once called himself the ‘Burmese bin Laden.’

But a Reuters examination traces 969’s origins to an official in the dictatorship that once ran Myanmar, and which is the direct predecessor of today’s reformist government.

Moreover, for the Muslims from outside Rakhine state, whether Rohingya or not, going to Rakhine is a one-way street, with slim possibility of returning back to, say, Yangon or Mandalay or other non-Rakhine cities. This is commonplace knowledge among all Muslims of Myanmar.d

Also, Physicians for Human Rights, a Nobel Prize-winning human rights NGO in the U.S., has documented the existence of systematic regime of surveillance and restrictions on Rohingya’s physical freedom to move from one village to the next.

The October 2016 report entitled “Where there is police there will be persecution” observed: “PHR’s investigators documented and mapped a network of 86 security checkpoints scattered across northern Rakhine State, where Rohingyas are routinely forced to pay bribes or face jail time and other types of brutality at the hands of security forces.

Many Rohingyas told PHR that they often avoided seeking advanced medical care because of their fear of passing through checkpoints and suffering the consequent abuse and humiliation. In addition to the system of checkpoints, PHR gathered evidence of raids and a pervasive surveillance system in Rohingya-populated areas, as well as instances of forced labour and arbitrary detention and fines. These include onerous fees that Rohingyas must pay to leave their villages, register fishing nets, fix their homes – even slaughter their own animals.”

I could go on and on and on about the Myanmar state counsellor’s disingenuous utterances and explanations (for instance, Rohingya “terrorists” caused the deterioration of the situation of N.Rakhine state, or that “decades-old communal tensions and distrust” – as opposed to the systematic and institutionalized destruction of Rohingyas, formerly officially recognized as full citizens and an integral ethnic minority of the Union of Burma).

In fact, Myanmar’s egregious violations of basic human rights of the Rohingya community in Western Myanmar was a major factor behind the UN establishing the mandate for the UN special rapporteur on human rights situation in Myanmar as early as 1991, that is, 25 years before the emergency of Rohingya militant group known as Arakan Rohingya Salvation Army or ARSA.

With no apparent regard for the facts, Myanmar’s state counsellor now typically repeats the military’s official narrative about the oppressed and persecuted Rohingya to sympathetic journalists from Singapore, or Japan, UN officials, foreign diplomats, and national politicians from other countries (such as ASEAN and Australian heads of state at the ASEAN-Australia Summit in Sydney this past March).

Calling Suu Kyi out on her lies, distortions, and leadership failures is not simply an act of personalization of policy or politics in Myanmar or demonization of a former anti-military dissident who once was a source of my activist inspiration.

For Myanmar’s Nobel laureate has come to serve, wittingly and in effect, as a major shield for my country’s military leaders, the investigation of whose misdeeds even the International Criminal Court Prosecutors want to embark on.

As such, Aung San Suu Kyi’s words and diplomacy stand in the way of international accountability for the crimes against humanity and even genocide commissioned by her partners in power.