Over the course of 14 years, they carried out the longest political killing spree in postwar German history. A recent trial reveals what German authorities did not want to know. 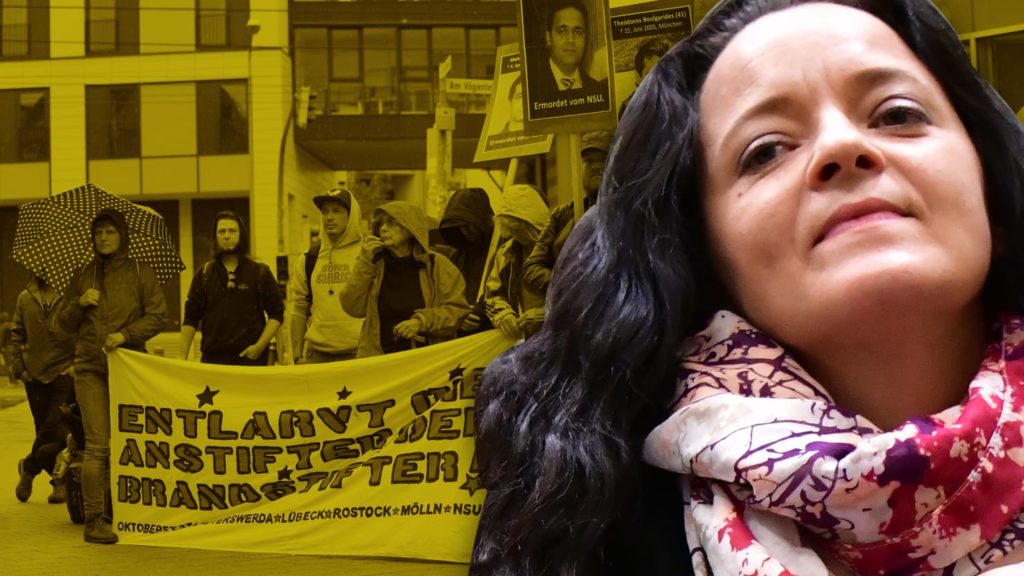 Photo Illustration by The Daily Beast

In the men’s bathroom he found a flashlight that he didn’t recognize. He clicked it on. The blast flung him all the way back to the pub’s entrance, and he lay there with his ears ringing, until he passed out.

Days later, when two German police officers showed up to interview him, the young man whose parents had immigrated from Turkey answered them in his rapid-fire Nuremberger accent. The two police officers told him that if the explosive had detonated properly, it would have killed him. Then they began to interrogate him about whether he’d been paying anyone “protection money.” They figured this was retaliation of some sort by local organized crime.

Fifteen years later, the same two officers, now elderly, contacted Mehmet O. again. It turned out, they told him, that the flashlight bomb in his bathroom had been put there not by any mafia but by the National Socialist Underground, a neo-Nazi terrorist group that went undetected for 14 years, enough time to conduct the longest political killing spree in postwar German history.

When Zschäpe heard her verdict she froze, but in the gallery a small group of neo-Nazis cheered.

Around Germany, protesters took to the streets under the slogan “Kein Schlussstrich”  (no ending) to demand that more people be held accountable—for example, the police who for years tried to pin the NSU’s crimes on the Turkish criminal underworld. Or certain intelligence agency informers, whose files are now being protected by the state.

What the Zschäpe case has done is expose not just the sordid history of neo-Nazis in this country but the still very problematic present.

Nine NSU sympathizers are under suspicion for supplying the core group with weapons, apartments, and fake passports, and they are currently under investigation—but maybe not for much longer. Mehmet Daimagüler, the lawyer representing several of the victims’ survivors, suggests that the federal public prosecutor’s office will soon shut these cases down.

“If the federal prosecutor’s office wanted to charge these people, they would have done so already,“ Daimagüler told The Daily Beast. “They want to prevent the circle of suspects getting bigger, because the bigger the circle, the more likely that they will stumble over informers from the domestic intelligence service. The state wants to avoid that.”

In fact, the federal prosecutor decided early on that the NSU was limited to three people: Beate Zschäpe, her boyfriend Uwe Böhnhardt and their friend Uwe Mundlos. Since both men shot themselves dead in a camper after a botched bank robbery in 2011, putting away their companion would seem to end the problem.

But then one of the men accused of helping the trio told the prosecutors about an NSU bombing that they hadn’t heard of—Böhnhardt and Mundlos had bragged “dramatically” that “they’d left a flashlight in a shop in Nuremberg.”

Before that, the federal prosecutor’s office had asked all German States to report any cases that might be connected to the neo-Nazi terror cell. But the district attorney in Nuremberg, a city in which three men of Turkish origin were shot dead by the NSU, did not think to mention the “unsolved” flashlight-bomb in Mehmet O.’s bar.

Mehmet O.’s case was kept out of the NSU trial on “procedurally inefficient” grounds. And the two police officers, after they questioned Mehmet O. for six hours, did not get in touch with him a third time. “Maybe they are retired now,” Mehmet O. joked, speaking to a small group of students and activists in Nuremberg last week. But he is not amused.

“I wanted to forget about it.” He said, “When they found me, they got my hopes up that there would be justice, but then there was nothing.“

Origins of the Terror Trio

This month, a group of preppy German-speaking students who use social media to promote the segregation of societies along racial lines (or as they like to call it: “ethnocultural identities”) are standing trial in Austria over hate speech. But Zschäpe’s pale mugshot harks back to another era of far-right hatred in the early 1990s when skinhead culture was making major strides in the former East German city of Jena.

The communist regime that ruled there until 1989, and which defined East Germany as an anti-fascist state, seems to have been blind to right-wing extremism among its own people. And in the wake of reunification, certain youth groups picked up Nazi memorabilia as the ultimate fuck you to their old fallen leaders, as well as to their new German chancellor’s elaborate promise of “blooming landscapes.“

In Jena, the NSU’s home town, people avoided entire neighborhoods or train routes out of fear they’d be beaten up by right-wing skinheads, who soon focused their hatred on recently arrived immigrants from countries like Vietnam and Turkey.

In the early 1990s, Pogrom-like attacks on asylum homes hit several cities. The country was shocked when two Lebanese girls were severely injured when their home was torched. Three people were killed in Mölin, and five in Solingen. In one infamous incident, skinheads laid siege to an asylum home in the Lichtenhagen neighborhood of Rostock.

In Jena, police stopped Zschäpe several times and found weapons on her—for example a dagger—but she was never arrested.

The neo-Nazi scene there  was where Zschäpe met her first boyfriend, Uwe Mundlos. Then Zschäpe left Mundlos for his best friend, Uwe Bönhardt, also a radical extremist, but they bonded around the idea they would terrorize immigrants.

In 1998, the three of them established themselves in the eyes of their like-minded peers in the skinhead community as the people who really “meant it” by going underground.

The police soon raided their apartments and discovered a “bomb factory“—several pipe bombs without detonators plus 1.4 kilograms of TNT— set up in a garage rented out in Zschäpe’s name.

Two years later, the NSU would commit its first murder, killing Enver Simsek, a flower seller of Turkish origin, in Nuremberg. They shot eight more men, all of whom owned small businesses. Seven of the men had Turkish roots and one man was Greek. Their names were Enver Şimşek, Abdurrahim Özüdoğru, Süleyman Taşköprü, Habil Kılıç, Mehmet Turgut, İsmail Yaşar, Mehmet Kubaşık, Halit Yozgat, and Theodoros Boulgarides. Each was shot in the head with the same gun. Police officer Michèle Kiesewetter in Heilbronn was the last known victim; she was shot with a different gun.

When family members of the NSU’s victims came to the trial here, they wanted to understand why their loved ones were killed. But when pictures of the bodies were projected, Zschäpe just looked away. Her trio of lawyers has advised her to stay silent for the last five years.

Looking Over His Shoulder

A few years after the bomb attack in 1999, Mehmet O. left Nuremberg. He had grown up in this city, but once he recovered enough from his injuries to go outside, he did not feel comfortable. He’d leave his building and turn around three times to check if anyone was lurking behind him. Even today, he doesn’t want to make his real name public. Nazis might be anywhere, he said, “Today you don’t recognize them anymore.”

When the police officers tracked down Mehmet O. in 2013, they told him that he had been the NSU’s “Testlauf,” that the terrorists had planted the bomb in his bar as a test run. “I was the small fish,” is how he describes himself. “They probably thought: this guy is quiet, he will not pass information on to the police or media.“ And if a customer or anyone else had switched on the flashlight-bomb hidden in his bar, he speculates, “the police would have suspected me.”

When the case was reopened there was a new shot at justice. In their six-hour-long meeting, the officers showed Mehmet O. pictures of 115 people. Mehmet O. pointed at one picture three times. “I can’t get her out of my head, I know her,“ he told them. He couldn’t rule out that she had visited his bar. The investigators thanked him for his time. They didn’t tell him that the woman he was pointing at was Beate Zschäpe’s best friend.

Susann Eminger is currently being investigated for her connections to the NSU, and her husband, Andre Eminger, stood trial with Zschäpe. He was accused of renting vehicles for the terrorists to drive around Germany.

In the courtroom, the Emingers made a thing out of public displays of affection, holding hands and making out like some 8th grade couple from hell, while lawyers and court reporters wondered why Susann Eminger was allowed in the pit to offer “emotional support“ rather than being questioned as an NSU-helper herself.

Beate Zschäpe was not involved in the NSU’s actual murders. But the judge ruled that she was an accomplice of “essential importance.” As is usual for women in neo-Nazi groups, she’d done logistics and provided the bourgeois façade. Her old neighbors who came to court to testify said that they thought Zschäpe was “nice“ because she paid for their booze at the discount store while the two elaborately tattooed men she lived with preferred to avoid eye contact. But despite Zschäpe’s sentence, which is the most severe available in the German court, Daimagüler, the attorney for victims’ families, labeled the day “a good day for Nazis in Germany.”

When Andre Eminger got off with a short sentence that would allow for his immediate release, his neo-Nazi buddies from the viewer’s gallery began to cheer. Eminger had stayed silent; he’d refused to answer questions. And, on some afternoons, for good meadure, he’d attend “anti-Islamization” protests around Munich.

The federal prosecutor believed that Andre Eminger knew about the NSU’s murder plans in advance. But now that the court has ruled that this neo-Nazi with “Die Jew Die” tattooed on his stomach had been naïve about the NSU’s killing spree, it’s unlikely that his wife, or anyone else, will continue to be investigated.

And so the trial that people had hoped would give the victims reasons to trust the German state again ended in applause from the fist-in-your-face faction of the audience, and the judge, who had previously kicked someone out of the gallery for wearing a T-shirt that said “no person is illegal”—because no political symbols in the courtroom—did not say a word to stop it.

Josephine Hüetlin is a freelance correspondent based in Berlin.