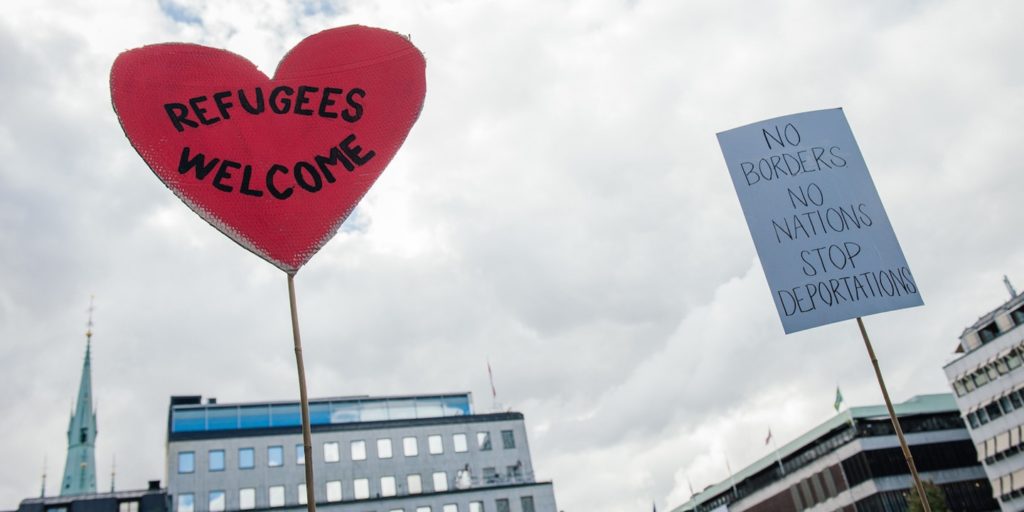 25 Jul 2018 – Elin Ersson, a Swedish college student, demonstrated this week how powerful a simple act of civil disobedience can be, when she refused to take her seat on a commercial flight unless a man being deported to Afghanistan via Turkey was removed from the plane first.

As documented in the remarkable video she streamed live to Facebook on Monday during her protest, Ersson, 21, boarded a plane in Gothenburg, Sweden, where she is studying to be a social worker, and remained standing to prevent the flight from departing for Turkey.

Excerpts from the 14-minute video posted online by The Guardian show that the student, who works with refugees in her city, stood her ground despite intense pressure from the flight crew and even an assault by an enraged British passenger until the deportation of a 52-year-old Afghan man was halted.

Ersson told Emine Saner of The Guardian that she had started the livestream, which she narrates in English, to ensure her own safety after being pushed by a security officer accompanying the asylum-seeker.

“I’m not going to sit down until this person is off the plane, because he will most likely get killed,” Ersson filmed herself explaining to a flight attendant early in the protest.

“It’s your country’s rules,” a man can be heard telling Ersson at one stage. “Yeah, I’m trying to change my country’s rules, I don’t like them,” she replies. “It’s not right to send people to hell.”

“But you’re preventing all these passengers to going their destination,” the man argues, slightly stumbling over his words. “Yeah, but they’re not going to die,” she answers. “He’s going to die.”

Later, the student activist was reduced to tears by the support shown to her from other passengers, including a Turkish man who told her, “We are with you,” and several who could be heard clapping for her.

When the authorities agreed to take the Afghan man off the plane, a tearful Ersson also left, to a round of applause from her supporters.

Swedish immigration officials told Deutsche Welle, a German news channel, that the man would eventually be deported despite the protest, and another Afghan that Ersson had also tried to protect was put on a different flight, from Stockholm.

Despite an outpouring of praise for Ersson online, the wave of anti-immigrant sentiment sweeping Europe has reached Sweden, where the neo-Nazi Nordic Resistance Movement has been linked to a series of explosions at asylum centers in Gothenburg. “I’m meeting Nazis on the street every month or so,” Ersson told The Guardian. “I sense they’re getting strength.”

Anxiety about immigration has also propelled a xenophobic, far-right party, the Sweden Democrats, into a strong position ahead of elections in September. The party, with neo-Nazi roots, could take as much as 20 percent of the vote for the next parliament.

Ersson, however, told reporters that she has been encouraged by the new awareness about Sweden’s deportation policies brought about by her action, and the mostly positive reaction to the video, which has been viewed in various forms close to 10 million times since Monday.