The Plot Thins: How Gel Became a Liquid and the Whole Novichok Affair Began to Smell to High Heaven 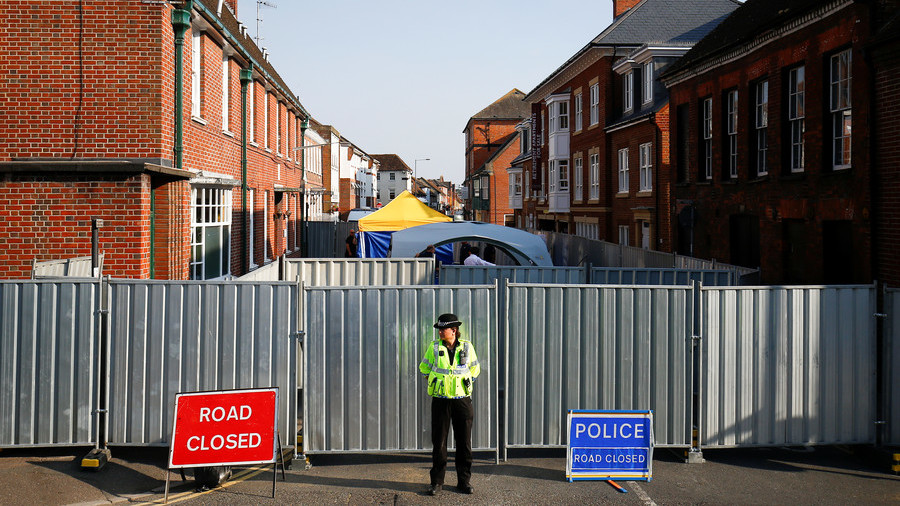 24 Jul 2018 – ‘Novichok’ survivor Charlie Rowley is in a “safe house” but has been denied access to television and newspapers, according to his brother. The ever-stranger case of the Salisbury-Amesbury poisonings gets curiouser and curiouser.

Whoever said ‘Novichok’ was a “military-grade lethal nerve agent” doesn’t know their tables.

For a program which Boris Johnson told us had been 10 years in the making, had cost (presumably) millions of dollars to develop (and “train” agents to put poison on a doorknob), a 20-percent success rate must have been a bitter disappointment.

Four out of five of those affected by ‘Novichok’ – Sergei and Yulia Skripal, Detective Sergeant Bailey, and Charlie Rowley – have survived the contact, with only poor Dawn Sturgess, a homeless alcoholic, succumbing to its “deadly” effects.

Read more: ‘Curiouser and Curiouser’: Salisbury, the Skripals & the epic failure of the British Fairy Tale

A polythene bag would have been a rather more effective method of assassination.

Moreover, so little of their “training” had the assassins absorbed that they apparently “discarded” this valuable deadly nerve agent in a perfume bottle in a park, coincidentally close to the bench on which the Skripals had been found slumped four months previous. The bottle miraculously evaded the dragnet of “hundreds of anti-terror police” working on the case. Thus discarded, the perfume bottle carelessly provided evidence which could well lead to the indictment of the criminals involved. Doubtless such carelessness was not in the Russian “training manual” that Mr Johnson said was in the possession of British intelligence.

No information has emerged as to when or where Mr Rowley and/or the late Ms Sturgess happened upon this perfume bottle, or why in the middle of the swirl of the Salisbury events they picked it up, took it home, but either waited until the fateful day to spray it or alternatively the bottle had lain unattended for weeks – even months – despite the fine-tooth-comb search of the park by the authorities.

Some things are now clearer though. The settled narrative has been for months that the initial ‘Novichok’ attack on the Skripals had been via a “gel” on their front doorknob (in accordance with the manual and the 10-year training program). Not many believe this any longer, although unfortunately the taxpayer is committed to a way-above-market-price compulsory purchase of the house.

Apart from anything else, it is difficult to envisage a gel being dispensed via a spray from a perfume bottle.

The government claims that the #Novichok poison was a "gel" smeared onto Sergei Skripal's "front door handle".
If the #Novichok was in the form of a gel, how could it be in a perfume bottle which are only designed to hold liquids? pic.twitter.com/BV0pUY5uAM

More importantly, if this narrative were to be accepted, it doesn’t explain how long (several hours) the substance took to work, nor the fact that it became effective on both Skripals at precisely the same moment – despite the huge divergence in their size, weight, age, and state of health.

It has always seemed much more plausible to me that the Skripals were attacked either in the restaurant where they had a leisurely full lunch, and where Mr Skripal was initially reported as behaving oddly towards the end of the restaurant experience, or on the short walk from the restaurant to the park bench, or on the bench itself. This would be far more consistent with their simultaneous collapse and, of course, would explain the perfume bottle discarded nearby.

Read more: We want to hear from Scotland Yard, not media reports on Skripals’ case – Russian envoy to UK

The perfume bottle being thrown away at all casts significant doubt that this attack was by a state (any state) actor at all, unless that state actor wanted the substance to be found and wanted false inferences of its provenance to be drawn. It makes it much more likely to me at least that the assailants sprayed something at the Skripals for criminal rather than political purposes and for reasons we can only, for now, speculate upon.

Mr Rowley of course was a criminal – he had been imprisoned for possession of 11 wraps of heroin in Salisbury only a couple of years before – and is still a daily drug-user. In those circumstances, in any normal police investigation, Mr Rowley would himself be a suspect rather than only a victim in this crime. So far as we know this is not the case, though no-one can ask him in his safe house, even through his non-existent television or undelivered newspapers.

It will be evident that I think little of the official state narrative in the Salisbury-Amesbury affair, but you’d be surprised at the kind of people who agree with me.

American filmmaker and radio host Lee Stranahan, who works out of Washington DC, was a house guest of mine last week. During his brief visit to England, he took his camera to Salisbury. Without wishing to spoil the documentary he’s working on, I know he won’t mind me saying that of the dozens of people he spoke to at the heart of the crime scene, not a single one of them believed the state version of events.

I myself spoke to a senior British Army officer at a black-tie event in London last week. There were hundreds of them there, so I’m not giving his identity away. He asked me, who did I really think was responsible for the ‘Novichok’ affair?

“Not the Russian state then?” he pressed.

“They are the least likely suspects,” I said.

At which point this heavily decorated soldier leant over and whispered in my ear, “It was Ukraine.”

He offered no evidence, I should say, and – but for his rank and position – I wouldn’t even bother relaying it. But that is what he said.

Finally, I wish to place on record another of my dissident views on this matter. I do not believe that the substance used to attack the Skripals, and which we are told killed Ms Sturgess, was ‘Novichok’ at all – or any other kind of “military-grade deadly nerve agent.” I am on the trail of this matter and you will be the first to know when I’ve found it.