The Shock Troops Who Expelled the Rohingya from Myanmar: Tip of the Spear

Two elite divisions led a crackdown that forced 700,000 Muslims to flee Myanmar. Here’s how they did it. 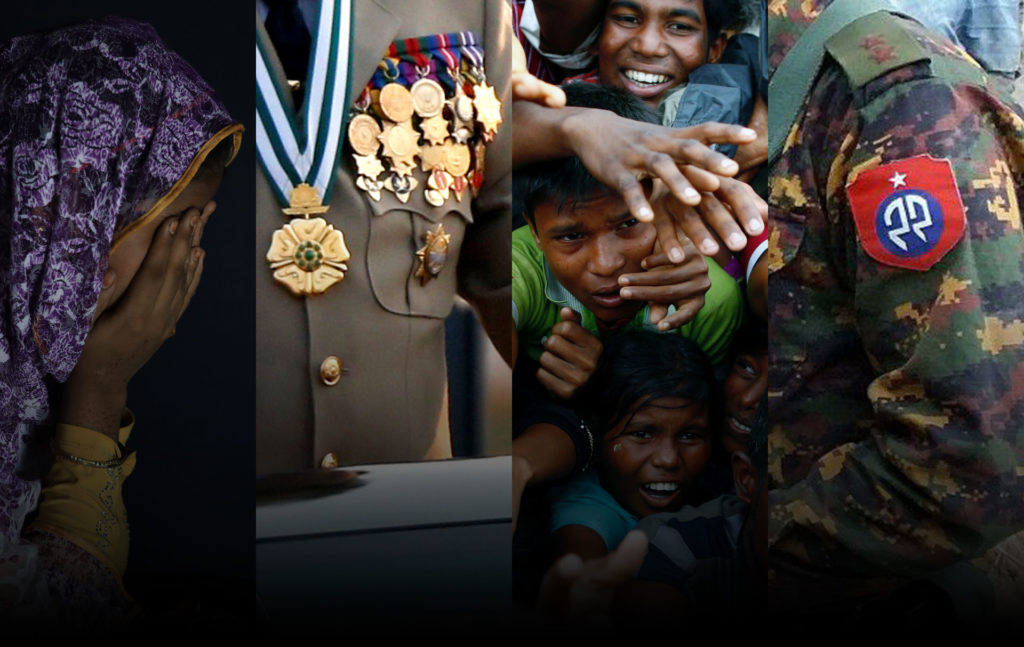 MUSLIM EXPULSION: The United Nations has said the Myanmar military may have perpetrated genocide last year against the Rohingya Muslims in Rakhine State.
REUTERS/Photo illustration

26 Jun 2018 – A Reuters’ investigation provides the first comprehensive account of the precise role played by Myanmar’s 33rd and 99th light infantry divisions in the savage offensive, and the close ties between the army’s commander in chief and its elite troops.

In early August last year, a young lieutenant named Kyi Nyan Lynn flew to Rakhine State, with hundreds of other Myanmar soldiers. They were about to launch a campaign that would drive hundreds of thousands of Rohingya Muslims from their homes and leave the region in flames.

“Are you going to eat Bengali meat?” commented a friend. Many Burmese refer to Rohingya as “Bengali” or use the pejorative term “kalar.”

“Whatever, man,” replied the lieutenant.

Kyi Nyan Lynn was part of what some Western military analysts refer to as Myanmar’s “tip of the spear:” hundreds of battle-hardened soldiers from two light infantry divisions – the 33rd and 99th – famed for their brutal counter-insurgency campaigns against this nation’s many ethnic minorities.

Related content: (Massacre in Myanmar) – (After the massacre) – (Investigating atrocities)

When Rohingya militants launched attacks across northern Rakhine State in August last year, the 33rd and 99th spearheaded the response. Their ensuing crackdown drove 700,000 Rohingya into neighboring Bangladesh. The United Nations has said the army may have committed genocide; the United States has called the action ethnic cleansing.

It has been widely reported that Myanmar soldiers committed mass killings and burned down Rohingya villages. But a Reuters investigation is the first comprehensive account of the precise role played by Myanmar’s 33rd and 99th light infantry divisions, how they executed the assault across northern Rakhine State, and the longstanding ties between Senior General Min Aung Hlaing, the commander in chief, and the army’s elite troops.

Reuters spoke to scores of Rohingya refugees in Bangladesh and Buddhists in Rakhine State, and conducted rare interviews with members of the Myanmar security forces, to reconstruct the actions of these two elite divisions. Interviews with Rohingya, Rakhine witnesses and policemen implicate troops from the two light infantry divisions in arson and killing.

The military is so secretive that even its official spokesmen rarely speak to the media. But Facebook is hugely popular in Myanmar, and Reuters found accounts of soldiers who posted about military life, troop movements and the crackdown in Rakhine State. The Facebook accounts of two members of the elite infantry divisions reveal a raw ethnic hatred.

Kyi Nyan Lynn, the soldier from the 33rd division, told Reuters that the army’s reaction was justified because soldiers were under attack from “Bengali terrorists.”

“They terrorized us first,” he said. “So we were given the duty to crack down on them. As we cracked down, whole villages fled.” He said he wasn’t involved in any killings or arson. 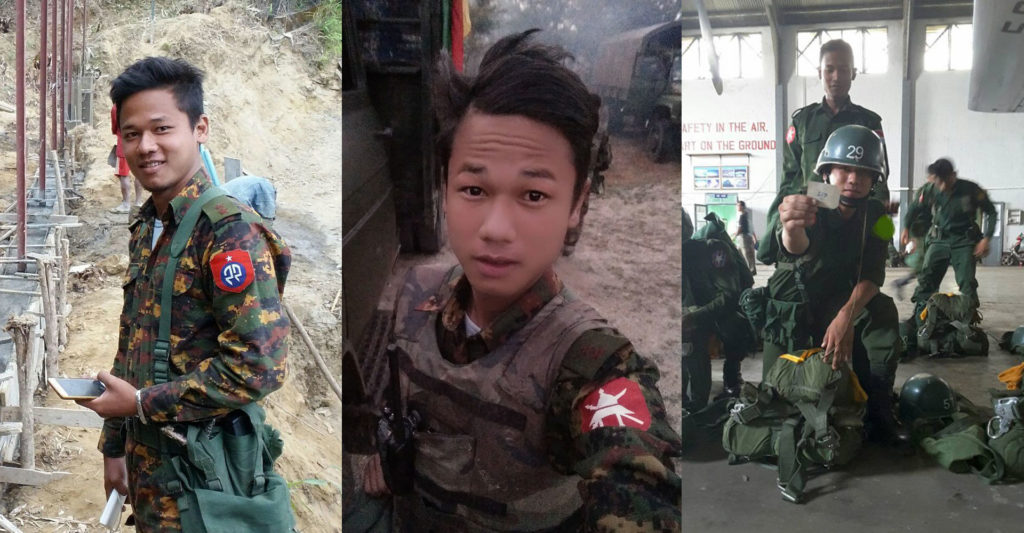 IN UNIFORM: Photos posted on Facebook by Lieutenant Kyi Nyan Lynn of the 33rd Light Infantry Division. A friend urged him to “crush” the Rohingya. He told Reuters he committed no abuses in the crackdown.
REUTERS/Facebook posts

The military and government did not respond to questions from Reuters. In the past, the government has denied allegations of ethnic cleansing in Rakhine and said the security forces mounted legitimate counter-insurgency operations against Rohingya militants. The Ministry of Home Affairs, which is responsible for the police, told Reuters it rejected allegations that policemen had been involved in torching Rohingya villages.

Rakhine State was already an ethnic tinderbox before the light infantry divisions arrived. Years of violence between its two main groups – Rohingya Muslims and Rakhine Buddhists – had killed hundreds and left thousands homeless, most of them Rohingya. Attacks by Rohingya militants in 2016 had rattled Myanmar’s security forces, who blamed ordinary Rohingya for harboring “terrorists.”

The arrival of the light infantry divisions in early August 2017 marked a dramatic military build-up. Photos from that period show soldiers arriving at the airport in Sittwe, or crowded onto boats.

The government of Nobel laureate Aung San Suu Kyi said in a statement at the time that the deployment would bring “peace, stability and security.” But the influx of heavily armed combat troops with a long history of alleged human rights abuses had the opposite effect: It stoked fear and tension across a volatile region, according to Rohingya villagers.

“They terrorized us first. So we were given the duty to crack down on them. As we cracked down, whole villages fled.”
— Lieutenant Kyi Nyan Lynn of the 33rd Light Infantry Division

Then, on Aug. 25, came attacks by the Arakan Rohingya Salvation Army (ARSA). The Rohingya militant group ambushed dozens of police posts and an army base in Rakhine. Already in place, the 33rd and 99th, along with other security forces, responded with a brutal campaign that effectively herded masses of Rohingya civilians north and west into Bangladesh.

Rohingya regard themselves as native to Rakhine State. But Myanmar has denied most of them citizenship, saying they are not an indigenous group, and the country’s Buddhist majority reviles them. Police and Rakhine Buddhist villagers told Reuters how they coordinated with troops from both divisions to burn down Rohingya villages, giving the residents no homes to return to.

The Reuters investigation of the light infantry divisions and their commanders comes at a time when global calls for accountability over the mass expulsion of the Rohingya are growing. The European Union and Canada on June 25 imposed sanctions on seven senior Myanmar military and police officers, including the commanders of the 33rd and 99th. The seven face asset freezes and are banned from traveling to EU countries. So far, the United States has sanctioned only one Myanmar general for abuses during the Rakhine campaign.

The new sanctions didn’t target the man with ultimate authority over the 33rd and 99th: Myanmar’s commander in chief, Min Aung Hlaing.

He is a diminutive figure who often wears round, rimless spectacles and looks more like an office clerk than the leader of one of the region’s largest standing armies. His rise through the ranks was intertwined with the bloody history of Myanmar’s light infantry divisions. 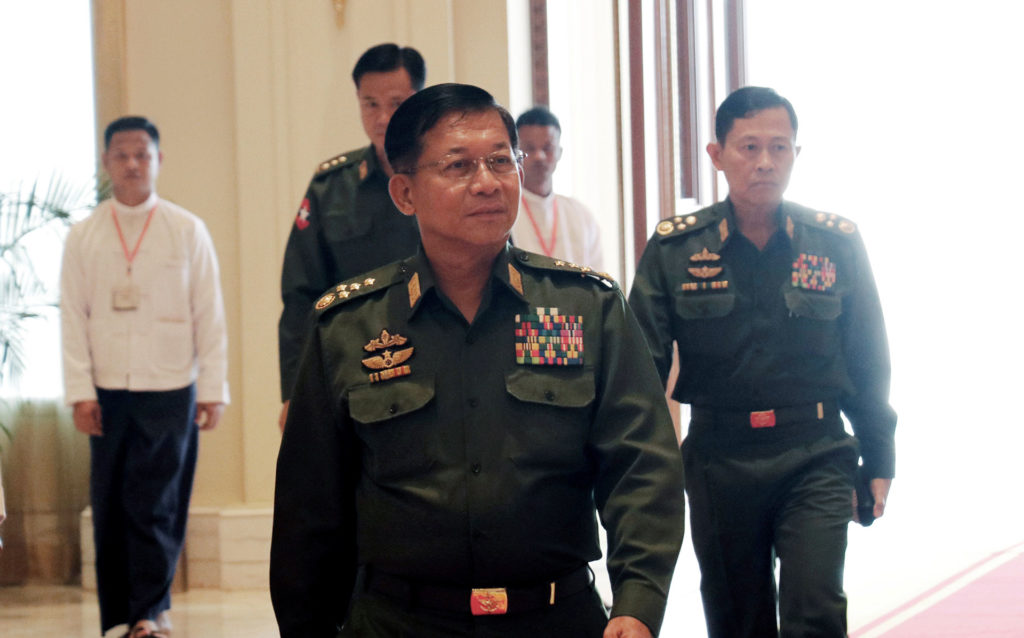 Earlier in his career, Min Aung Hlaing led the 44th Light Infantry Division. In 2009, as a special operations commander, he oversaw the deployment of the 33rd in a campaign to drive armed rebels from an enclave of eastern Myanmar; some 37,000 people fled across the border into China. He became commander in chief in 2011.

Min Aung Hlaing was the public face of the crackdown in Rakhine State. Days before the 33rd and 99th were deployed, he held a widely publicized security meeting with ethnic Rakhine leaders. In the midst of the crackdown, on Sept. 1, he said: “The Bengali problem was a long-standing one which has become an unfinished job.” And on Sept. 19 he visited Sittwe, the state capital, and – according to his Facebook page – he received a detailed briefing from senior officers on the progress of the military operation in Rakhine.

The military did not respond to Reuters request for comment from Min Aung Hlaing.

Past military offensives waged by the 33rd and 99th have gone largely unnoticed by the world. But the impact of their Rakhine crackdown has been far-reaching.

It created an ongoing refugee emergency that Bangladesh, one of the world’s poorest countries, is ill-equipped to deal with. And it damaged Suu Kyi’s global image as a democracy icon. Human rights activists accuse her of not standing up more forcibly for the long-persecuted Rohingya, then supporting the military’s version of events. Her office had no comment.

In December, the international aid group Médecins Sans Frontières estimated that at least 6,700 Rohingya were killed in the first month of the crackdown alone.

The military had no comment on the death toll in Rakhine or on the specific allegations of abuses described in this article. In November, it said that 13 members of the security forces were killed in the conflict, and it recovered the bodies of 376 ARSA militants between Aug. 25 and Sept. 5, when the offensive officially ended. 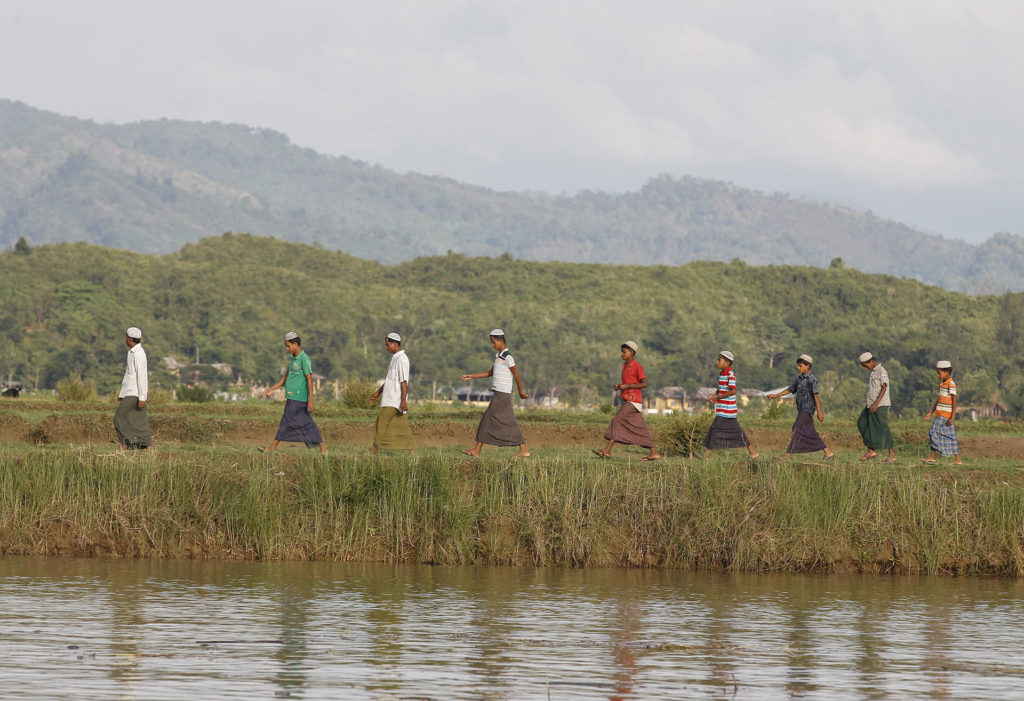 BEFORE THE CRACKDOWN: Rohingya Muslims walk along a riverbank in Buthidaung, one of the three townships that make up northern Rakhine State. Rohingya regard themselves as native to the region. REUTERS/Soe Zeya Tun

”If they’re Bengali, they’ll be killed”

Three photos distributed by Myanmar Pressphoto Agency show soldiers arriving at the airport in Sittwe on Aug. 10. Two of the photos also show military planes: a Chinese-made Shaanxi Y-8 capable of transporting more than 100 soldiers; and a smaller, French-made turboprop. In the third photo, at least 30 soldiers are lined up on the tarmac in front of a fleet of army trucks. One soldier’s shoulder clearly bears the badge of the 33rd.

Flying to Rakhine, although not necessarily on one of these planes, was Lieutenant Kyi Nyan Lynn of the 33rd Light Infantry Division. He identified himself on Facebook as Mai Naung Lynn. His homepage address, and a photo he posts of his wedding, name him as Kyi Nyan Lynn. He is 24.

On Aug. 11, he posted a smirking emoji on Facebook. “If they’re Bengali,” he assured his friends, “they’ll be killed.”

The soldiers in the photos taken at Sittwe airport are, by the standards of the Myanmar military, well-equipped and heavily armed. They wear helmets and flak jackets, and carry rifles and mortars.

ON PATROL: Myanmar soldiers march through the Rakhine village of Inn Din in October 2017, the month after 10 Rohingya men were massacred there. The 33rd led operations in the village.

To continue reading the Report Go to Original – reuters.com