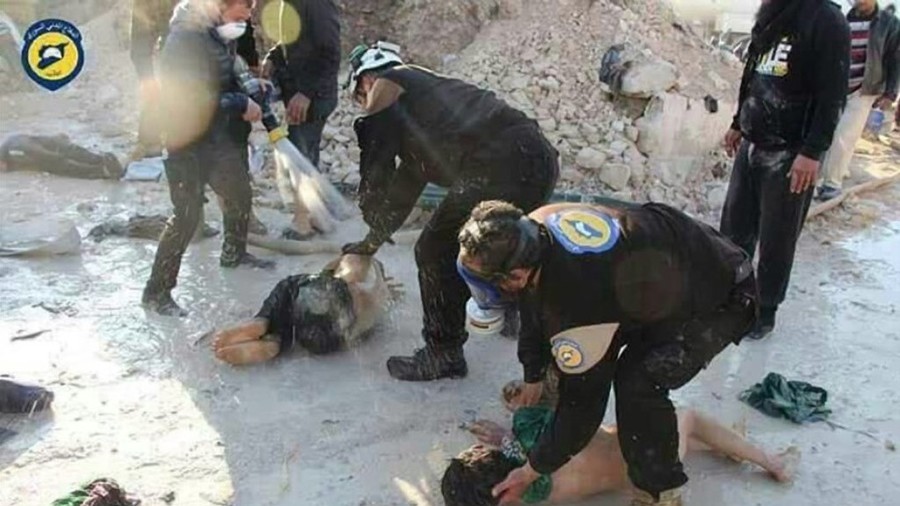 26 Jul 2018 – History appears to repeat itself as Israel conducts an “exceptional” rescue of extremist militants and their White Helmet “mannequins” from southern Syria – at the urgent request of NATO member states.

The military alliance’s member states just conducted a novel version of Operation Paperclip in Southern Syria but, instead of resettling Nazi war criminals to develop a weapon’s program in the US, they will resettle Al Qaeda militants and their auxiliaries. Indeed, the latter’s role has been to corroborate alleged tales of chemical weapons use by Syria – to justify the intervention of the US coalition, both by proxy and directly, against a sovereign nation.

Post World War II, the US imported Nazi scientists to prevent them falling into the hands of Soviet forces. Decades later America and its allies are extricating their client extremists, who are operating undercover in Syria, from the threat of discovery by approaching Syrian and Russian forces.

Israel, the nation that thinks nothing of shooting Razan Al Najjar, a Palestinian medic, in the back, was filmed offering tea and water to the criminal factions and UK, US intelligence assets on the air-conditioned buses that transported them to safety in Israel, and then Jordan. The latter has, so far, received more than 400 of these celebrated “humanitarians.” Their exploits inside Syria dishonor the term for all authentic Syrian Civil Defence and paramedic volunteer organizations who did not jump ship, leaving civilians to perish at the border while they were given priority in Israeli “lifeboats.”

In the course of a life sprinkled with calamity, I can vouchsafe there are no tales of bravery with the crew in the lifeboats before the passengers. @VanessaBeeley @MarkSleboda1 @HalaJaber @snarwani #WhiteHelmets pic.twitter.com/UxpgYvqoTY

This is not the first time that the White Helmets, and the armed groups for which they provide cover, have received “exceptional” protection from their handlers and paymasters in the West.

Special requests for their priority extraction from East Aleppo and Eastern Ghouta were submitted by UN agencies during the final battles to liberate these two areas occupied by Western and Gulf state-backed extremist groups, including Al-Nusra Front.

On the March 16, 2018, the permanent Syrian representative at the UN, Dr Bashar Al Jaafari  told the UN Security Council:

“The biggest scandal is that a UN agency operating in Damascus demanded the evacuation of 76 members of White Helmets from Eastern Ghouta, while paying no attention to the lives of thousands of civilians.”

The biggest scandal is the West’s immersion in the quagmire of another regime change war that has reduced a sovereign nation to a maelstrom of violence and conflict, crippled by economic sanctions that collectively punish the Syrian people for resisting the hostile invasion and the attempted rape of their secular state. The same armed groups, who have conducted their brutal sectarian attacks at the behest of their financiers in the West, have just availed themselves of Israel’s services to escape the consequences of their violence and atrocities committed against the Syrian people. All the while they have been aided and abetted by the “untouchable” White Helmets.

In Iraq and Afghanistan, the UK Government abandoned local military and media interpreters and fixers to their fate when their usefulness had expired. In Basra, after the Iraq War of 2003, interpreters who had served with the British Army were reportedly hunted down by Iraqi death squads and systematically murdered. Their bodies were unceremoniously dumped in different areas of the city. The Independent reported in 2008 that “in a single mass killing, 17 interpreters were killed.” Their blood is on the hands of the British government who left them to die.

Interpreters who had served with the British military in Afghanistan met with a similar, shameful fate at the hands of the British government, who cynically exploited their skills during the conflict but discarded them when they became surplus to requirements. In 2016, 29-year-old former interpreter Nangyalai Dawoodzai committed suicide after hearing “he may be deported from the UK back to Italy and from there, potentially back to Afghanistan” – where almost certain death lay in store for him.

“Dawoodzai had served with British forces over the course of three years and had himself been threatened by the insurgent group. He was arrested at his hostel in Birmingham after his fingerprints were matched with those taken in Italy. He was released after 18 days in a detention center but later found dead.” – RT Report

This is ⁦@ahmedbaider1⁩ working in Sana’a, #yemen with ⁦@itvnews⁩ in 2016. He has been denied a UK visa for vital safety training because @foreignoffice say they do not believe he is a media fixer. pic.twitter.com/uU5fOEO3d6

The UK is supplying arms to the Saudi-led coalition which rains death down upon the Yemeni civilian population. The UK has military advisers in the Riyadh control and command center – although they insist they do not designate targets such as hospitals, schools, wedding halls and an entire array of civilian infrastructure. The UK is participating in what can only be described as a genocide in Yemen but when it comes to approval of a visa for a Yemeni fixer, who has worked with UK media outlets, access is denied on the spurious basis that Ahmed Baider is not believed to be who he says he is.

The UK Government is not so circumspect in its “fact-checking” when it comes to its multi-million-pound investment, the White Helmets, midwifed in Turkey and Jordan and now embedded with Al Qaeda and other terrorist groups in Syria. Now they occupy a rapidly-dwindling area of territory as the Syrian Arab Army and its allies sweep to victory in the seven-year long conflict with the US-led coalition.

The White Helmets attended #SAMS18IC conference, and talked about the difficulties of the work in Syria.@RaedAlSaleh3 was honored on behalf of White Helmets by SAMS for their sacrifice and the rescuing of +115K people in syria pic.twitter.com/atGAmoqCej

In a statement issued by the UK Foreign Secretary Jeremy Hunt and International Development Secretary Penny Mordaunt on the “resettlement” of White Helmets “from Syria for their protection,” they reiterated a claim made on a regular basis by the White Helmets.

“The White Helmets have saved over 115,000 lives during the Syrian conflict, at great risk to their own. Many White Helmets volunteers have also been killed while doing their work – trying to rescue civilians trapped in bombarded buildings or providing first aid to injured civilians. White Helmets have been the target of attacks and, due to their high profile, we judged that, in these particular circumstances, the volunteers required immediate protection. We therefore took steps with the aim of affording that protection to as many of the volunteers and their families as possible.”

Mayday Rescue is another alleged NGO, based in the Netherlands and funded directly by the UK FCO and the Conflict Stability and Security Fund (CSSF). Mayday Rescue was established by ex-MI5 founder of the White Helmets, James Le Mesurier, in 2014, one year after he set the White Helmets wheels in motion. MR was created as a convenient interface between the British government and its clandestine propaganda construct to enable the funnelling of funds to the White Helmets. Hardly an independent check and balance of the figures provided by the White Helmets, who issue those stats from inside Al Qaeda headquarters.

Below is a screenshot of the FOI and the shameful response from the UK FCO: 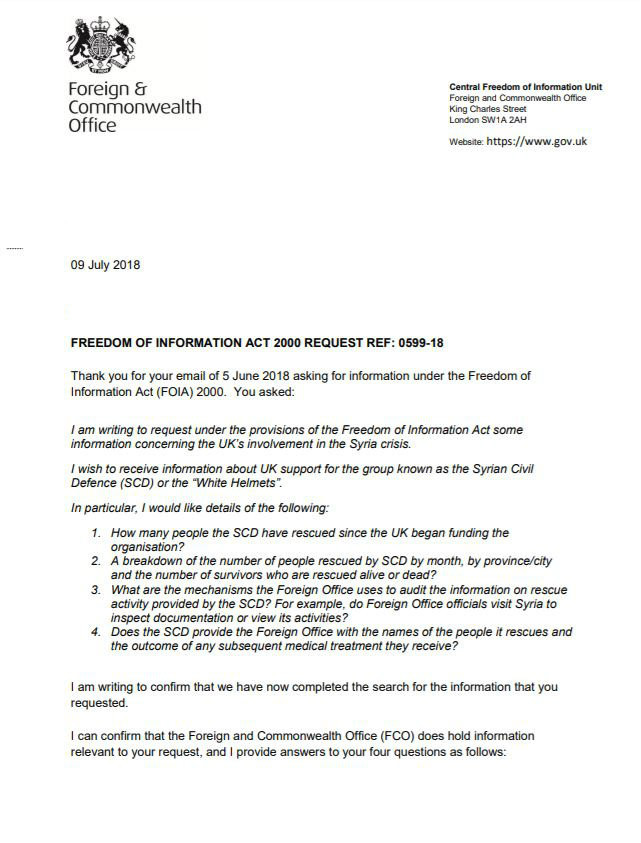 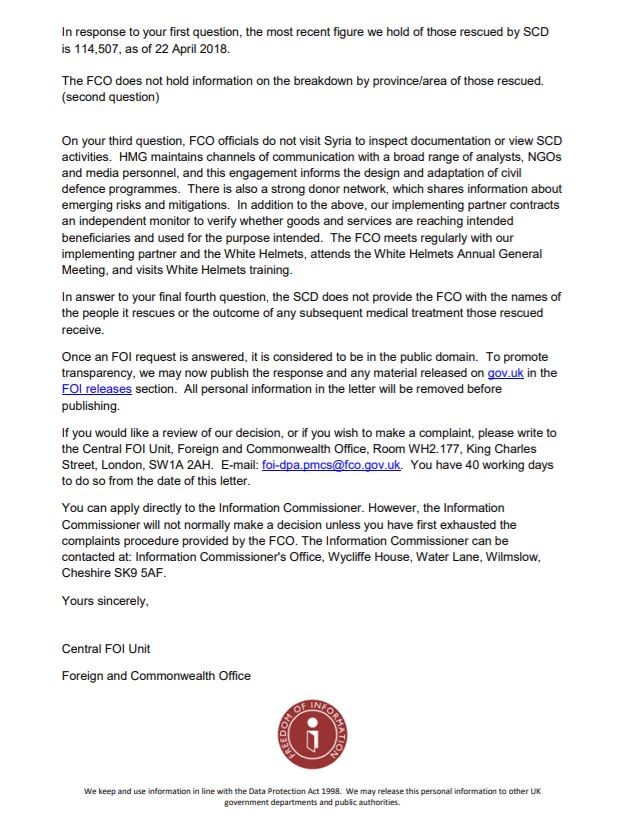 Are we supposed to feel reassured that the British government meets regularly with the UK FCO outreach organization, Mayday Rescue and attends the White Helmet Annual General Meeting without having ever queried the information that is fed to them by this cartel?

“In answer to your final fourth question, the SCD does not provide the FCO with the names of the people it rescues or the outcome of any subsequent medical treatment those rescued receive.”

Of course, this is gross negligence if the UK government were genuine in its efforts to authenticate information on which it bases its foreign policy in Syria. What it actually reveals is that the UK FCO has deliberately created a closed propaganda loop that provides precisely the information that is required by the UK FCO to justify its interventionist policy in Syria. Everything else is just doublespeak and political obscurantism.

The White Helmets are a fraud. They are a fraud from beginning to end. If they had indeed saved such a huge number of Syrian civilians, why do we never see civilians singing their praises? Instead we hear nothing but accusations of crimes against humanity committed directly by the White Helmets and in collaboration with Al Qaeda and associated extremist groups, such as Nour Al Din Zinki who beheaded a 12-year-old Palestinian child only 200 meters from the White Helmets center in Al Ansari, East Aleppo. When Abdullah Issa was pleading to be killed humanely in 2016, where were the White Helmets? Too busy looking the other way or searching the skies for “barrel bombs” in preparation for their second Oscar-nominated movie, Last Men in Aleppo.

Israel does not offer “exceptional” assistance to its enemies. The White Helmets are the “friends” of Israel, as are the militant thugs and extremist murderers who escaped under the White Helmets’ cloak of invisibility. The British government “pays tribute to the brave and selfless work that White Helmets volunteers have done to save Syrians on all sides of the conflict.” In 2015, Le Mesurier admitted, in an interview, that the White Helmets is a sectarian organization.

The White Helmets have demonstrated their violent sectarian nature on many occasions, perhaps most notably calling for the “extermination” of the Syrian Shia Muslim communities of Kafarya and Foua in the Idlib countryside during the Al-Nusra Front-Ahrar al Sham siege which started in March 2015. The final evacuation of these long-suffering villages was completed in the last few days, without help from the White Helmets, despite their claims to “assist all sides in the conflict.”

For the Syrian people, there will be no statues erected in “honor” of these “impartial, unarmed, saviors of mankind” – that privilege will be reserved for the White Helmets in Britain, France, Germany and Canada, who owe the greatest debt of gratitude to this group they have nurtured and financed for five years. A group that has provided them with the fabricated excuses to commit war crimes against Syria under the banner of “exceptional humanitarianism,” a claim that’s proven to be hollow and hypocritical when one surveys the UK-US interventionist road map. It’s a map littered with the corpses of those who also served, but were no longer “fit for purpose.” Clearly the White Helmets’ purpose is not over yet.

Vanessa Beeley is an independent investigative journalist and photographer. She is associate editor at 21st Century Wire.