Why Is Macedonia Changing Its Name?

A resolution of the Macedonia name dispute is the good news the Balkans badly needed. 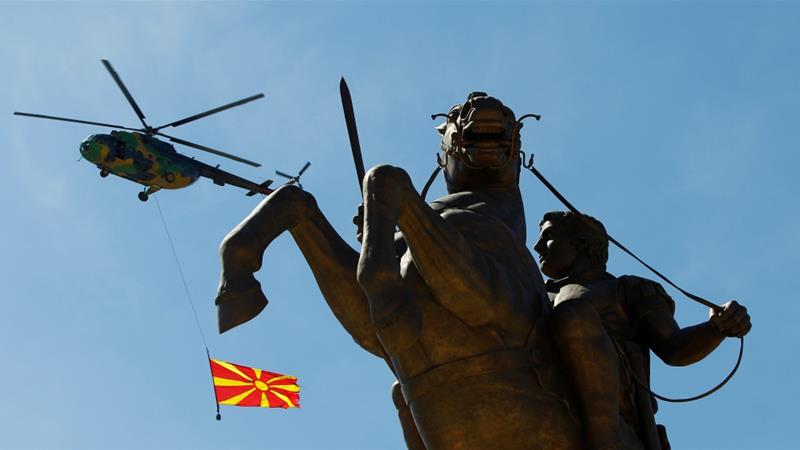 Macedonian Army helicopter flies near the Alexander the Great monument during exercises to mark NATO day in Skopje on April 4, 2018.
[Reuters/Ognen Teofilovski]

13 Jun 2018 – Balkan peoples love to argue among themselves. Whether it’s squabbles about the past or fights in the present, there is plenty that puts neighbours at odds with one another.

One thing is beyond dispute however: the word “compromise” has a negative ring to it in nearly all languages of Southeast Europe. Politicians in Scandinavia or Germany might take pride in their ability to forge consensus and bridge opposing views. But their colleagues in the Balkans seem to thrive in confrontation, even when they wheel and deal with their adversaries behind the scenes.

The case is point is the so-called Macedonia name dispute. Ever since the former Yugoslav republic by that name gained independence in 1991, the dispute with neighbouring Greece became a centerpiece of the region’s politics.

More than a quarter of a century has passed without Athens and Skopje settling their differences. And the outside world, for the most part, remains baffled by the dispute preventing the Republic of Macedonia, or FYROM if you wish, from joining NATO and starting membership talks with the European Union.

What is the dispute about?

Greece objects that the “Republic of Macedonia” implies a claim to the whole geographic region of Macedonia, of which more than half is part of Greek territory. Furthermore, the majority of Greeks have been alarmed by the appropriation by Slav Macedonian nationalists of Ancient Macedonian heritage. For them, Alexander the Great is part and parcel of Hellenic identity.

Resentment only grew when the centre-right VMRO-Democratic Party for Macedonian National Unity embarked on a campaign of “antiquisation” upon seizing power in Skopje in 2006. Under its populist Prime Minister Nikola Gruevski, the capital’s downtown area was revamped into what looks like a neoclassical-themed amusement park presided over by a humongous statue of Alexander the Great perched upon a fountain in the main square.

That made the quarrel even worse. Not only did the Greek government veto Macedonia’s entry into NATO but it also added the name of the majority population and their language to the list of problem issues.

But Slav Macedonians have their legitimate grievances, too. They have the right to self-determination and the right to choose what to call themselves, their language and, their country. Unlike Bulgaria, Greece had no objections when Macedonia was part of communist Yugoslavia, nor did it really push against the codification of a Slav Macedonian language after World War II and  the recognition of a Macedonian nation within the federal system.

It was only post-independence that successive Greek governments raised alarm about irredentism and portrayed their feeble neighbour, barely making it safely out of the bloodshed ripping Yugoslavia apart, as a top national threat.

Skopje did push for the rights of ethnic Macedonians in northern Greece – arguably a minority among the Slav speakers in the region, most of whom share a Greek national identity.

But to say that the country poses a real challenge to Greece – a member of NATO and the European Union with a strong military and much larger economy – is stretching it too far. In fact, over the years Greece has become a key trade partner and leading investor across its northern border. And at the end of the day, it is in Athens’ interest to have its neighbour join the EU as an essential step towards stability and prosperity.

Now the good news: There is a breakthrough. On June 12, Prime Minister Zoran Zaev announced that he and Greek Alexis Tsipras had struck a deal.  “Northern Macedonia” will be the compromise name, a concession for Greece.

Skopje is meanwhile winning on the issues of naming the nationality (“Macedonian citizens of Republic of Northern Macedonia”) and the language (“Macedonian”). The adjective Skopje will be using in official communications would remain “Macedonian”.

The agreement is contingent on the outcome of a referendum in Macedonia and an endorsement vote by the Greek parliament.

The EU and NATO’s role cannot be overstated. It has been the resolve of Zaev’s government to shepherd Macedonia into the Western clubs which led to the settlement with Athens. Greece holds the key to joining the Atlantic Alliance and the EU.

The next meeting of the European Council, a gathering of heads of state and government, on June 28-29 will provide the venue where Zaev and Tsipras will present their agreement. If everything goes according to plan Skopje could be given green light for accession negotiations with the EU.

NATO is likely to invite “Northern Macedonia” as a member at its next summit in Brussels (July 11-12) – a full decade after a membership proposal was blocked during the Bucharest summit. Athens will then ratify the accession protocol in the autumn, together with the agreement on the name issue.

There are spoilers, however. The Hungarian Prime Minister Viktor Orban has called on VMRO-DPMNE, now in opposition, to fight against an externally imposed compromise. He lauded Gruevski – who was recently sentenced by a court of first instance for embezzling public money – for coming to Europe’s rescue during the migration crisis of 2015-2016.

But in reality, VMRO-DPMNE might find it hard to defeat Zaev at the referendum. Together with the Albanian parties in his government, the prime minister should be able to garner sufficient support for the deal.

The ball is primarily in Tsipras’ court. Could he muster enough votes in parliament to get a deal through? The main opposition party, New Democracy (ND), is squarely opposed. So is Independent Greeks, an ND splinter faction which has governed in coalition with Tsipras’ Syriza since 2015.

This means that the prime minister would depend on support by other parts of the opposition, such as the leftist Movement for Changes. If Tsipras manages to shepherd it through the ratification process, he will win his place in history.

The breakthrough in the dispute is sure to have geopolitical repercussions.

Although formal accession will take time, (Northern) Macedonia’s entry into NATO will allow the West to claim a victory in the standoff against Russia. The country, which was on the brink of a civil conflict in early 2017, will earn plaudits as a success story of Euro-Atlantic engagement at a time when Europe and Canada, on one side, and the US, on the other, are at each other’s throats.

A symbolic gain, it will nonetheless boost morale, especially as it comes a year after Montenegro joined the alliance. The membership talks with the EU will be a boon for Skopje too, provided that skeptics such as France or the Netherlands do not raise last-minute objections.

EU dignitaries such as German Chancellor Merkel, who phoned Zaev and Tsipras in late May, appear to be enthusiastic. The compromise between Athens and Skopje is the sort of good news the Balkans badly needed. Let us hope that Zaev and Tsipras will pull it off.

NATO and the EU will be of tremendous help, as will Greece if it plays constructively, but the main responsibility for positive change lies with the Macedonian citizens.

Dimitar Bechev is a Nonresident Senior Fellow at the Atlantic Council.