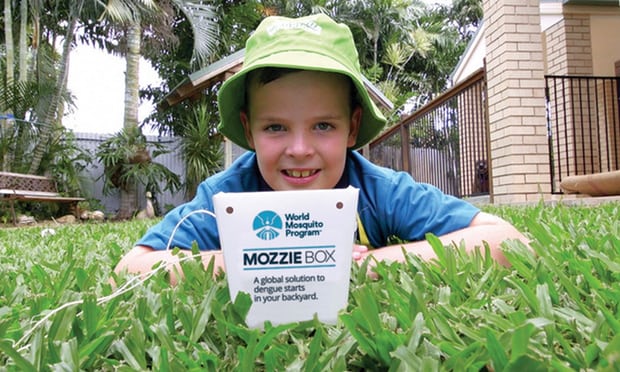 Children from Townsville took part in the project, helping to release the infected mosquitoes into their breeding areas.
Photograph: Courtesy of World Mosquito Program

1 Aug 2018 – The first large-scale deployment of mosquitoes infected with Wolbachia bacteria, which makes them unable to transmit viruses, has stopped all outbreaks of dengue fever in a city in northern Australia for the last four years.

The success of the project in Townsville, Queensland, will encourage hopes that Wolbachia can provide a knockout blow against the Zika virus in Brazil as well, where the mosquitoes have been introduced into the favelas of Rio de Janeiro. Until now, the technology has looked promising but has only been tried in small pilot projects around the world of 1 to 1.5 square km.

Townsville, however, with 187,000 inhabitants, is on a much larger scale. Mosquitoes specially bred to carry Wolbachia, which occurs naturally in up to 60% of insects, were let loose over 66 square kilometres of the city in places where they could naturally breed.

In four rainy seasons since the mosquitoes were introduced, dengue has ceased to be a problem in Townsville, which has had no cases of a disease that used to be troublesome.

“I’m ecstatic,” said Scott O’Neill, director of the World Mosquito Program at Monash University in Australia, who led the project. “After a long slog in my career in doing this, I think this is a piece of work I’m really quite proud of because it really shows we’ll be able to take this all the way, I think.

“We’re wanting to have a really major impact on disease. For dengue and Zika nothing’s working at the moment for control. There’s evidence of a growing disease burden and there was the big Zika pandemic that stripped through the Americas recently and the rest of the world.

“Nothing we’ve got is slowing these diseases down – they are getting worse. I think we’ve got something here that’s going to have a significant impact and I think this study is the first indication that it’s looking very promising.”

The people of Townsville accepted the project – and even took part in it, with schoolchildren releasing the mosquitos. Community ownership is important, said O’Neill. Communities involved in projects in Rio de Janeiro in Brazil, Medellin in Colombia, and Indonesia have all embraced the work, possibly because of the fear of the diseases they are trying to control, said O’Neill.

The results of the Townsville project are being published on the Gates Open Research site, set up by the programme’s biggest funder. The next big test will be in Yogyakarta in Indonesia, where O’Neill and colleagues are conducting a randomised controlled trial. This will compare areas of a city where Wolbachia mosquitos are introduced with other areas where they are not. They will track the disease burden in each and provide important scientific evidence as to efficacy.

The programme is now in 11 other countries. The land area covered in Rio is twice that of Townsville and the population six times as great, with more than 1.5 million people. “Rio is one of the hardest places to work in,” said Scott. “The favelas are quite a challenge. If we can be successful in Rio we can probably be successful anywhere in the world.”

The cost of the programme was AUD$15 (£8.50) per inhabitant in Townsville, but the team hope it can be made available for USD$1 (75p) each in cities in poorer parts of the world.

There does not appear to be an environmental downside to the release of Wolbachia-carrying mosquitos, he said, and he believes the technology is safe. “If there is one thing that keeps me up at night, it’s how long and how strongly the effect will last – whether there will be an attenuation over time,” he said. But there have been Wolbachia mosquitos in the field for seven years now and the effect does not appear to have waned yet.

In the long run, if Wolbachia does prove safe and effective, scientists may attempt its use against malaria. In 2016, there were 216 million cases of malaria worldwide and 445,000 deaths. “There is lab data showing this approach could be effective in malaria as well, but that is much further upstream,” said O’Neill.