This is the second Israeli attack on a Palestinian cultural civilian site in Gaza. 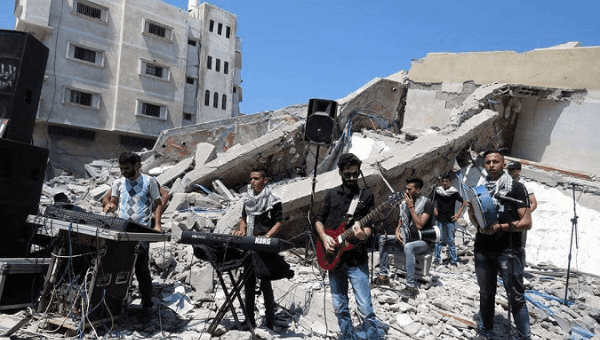 10 Aug 2018 – Israeli warplanes targeted and destroyed the Said al-Mishal Cultural Center in the al-Shati refugee camp in Gaza City Thursday [9 Aug], in a round of airstrikes that according to occupation forces hit 150 targets throughout the besieged Gaza Strip.

The Israeli army said in a statement that the airstrikes were a response to rockets fired from Gaza that landed on the outskirts of the southern city of Beersheba. Justifying the attack on civilian infrastructure Israeli officials arguing it housed “the operational arm of the political leadership of the Hamas terror group.”

However, residents claim the building served mainly as a cultural center, one of the few sources of entertainment for Palestinians who live under an 11-year air, sea and land blockade. The building also housed an organization that provided services to Egyptian women married to Palestinian men in Gaza.

Adel Abd al-Rahman, president of the Egyptian community in Gaza, stated that services were provided to thousands of Egyptian mothers in the building before it was “destroyed in an ugly and arrogant way.”

Videos of the bombing that totally destroyed the structure revealed it was located in a populated area. Local health officials said the blast wounded 18 bystanders, and Hamas has denied using the facility.

Social media users have condemned Israeli forces for the attack on the cultural building, arguing they are deliberately targeting cultural sites.

I took this video of ‘O, Palestine’s Children’ song sang at Said Almishal Cultural Center back in 2016 by Dawaween band. Israel wants to erase our culture too. Share #GazaUnderAttack pic.twitter.com/RLqzPm1Bpl

In July, Israeli occupation forces targeted the “Arts and Crafts Village,” a museum managed by the City Council in Gaza, which housed essential items of Palestinian archeological history.

Tensions between Israel and Gaza escalated Wednesday. The Israeli Army claims the recent round of tensions were ignited by Hamas militants, who opened fire on an IDF vehicle in Gaza.

A Hamas spokesperson denied the statement, saying Israeli forces had killed two Hamas fighters during on their military exercises in northern Gaza in an “unprovoked” attack.

Since then 23 Israelis have been hospitalized for injuries as a result of rocket fire, Israeli newspaper Haaretz reported. Israeli airstrikes Wednesday claimed the lives of a pregnant Palestinian woman and her toddler, and at least 18 people have sustained significant injuries.

Shortly after Israel bombed the al-Mishal Cultural Center, conflicting reports of a ceasefire emerged. A Palestinian official reportedly confirmed that “Egyptian efforts managed to restore calm between Palestinian factions and Israel.” There have been no additional attacks since then, but Israeli officials denied the claim both sides had reached a ceasefire.

On Friday, Palestinians in Gaza will resume their weekly protests in the context of the Great March of Return.