After being excluded from a controversial citizen register, millions of Muslims in India’s Assam state are in legal limbo. 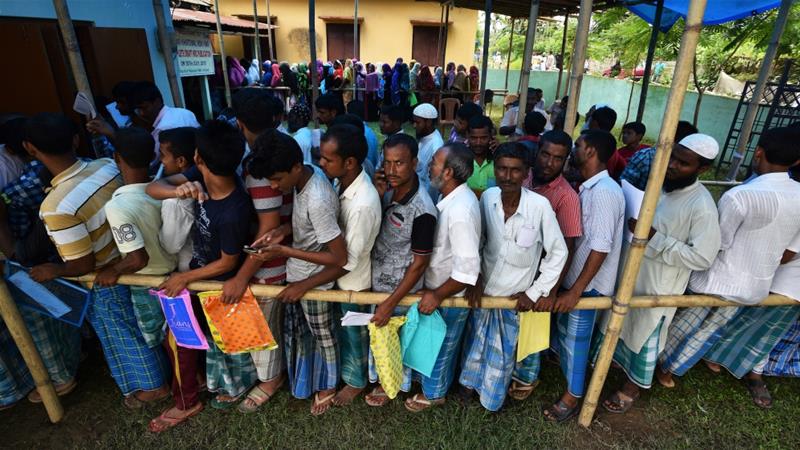 People wait in queue to check their names on the draft list at the National Register of Citizens (NRC) centre at a village in Nagaon district, Assam state, India, July 30, 2018. [Reuters]

4 Aug 2018 – India’s north-eastern Assam state was thrown into turmoil on July 30, after approximately four million people living there were not included in a draft list of citizens published by authorities.

The Registrar General of India (RGI), which published the draft list called the National Register of Citizens (NRC), said out of the 32.9 million people living in the border state, only 28.9 million managed to submit the necessary documents proving their citizenship.

Some human rights activists deemed the list the “biggest exercise for disenfranchisement in human history” while others said those not included into the list are in legal limbo and may eventually be left stateless.

Now the fate of millions – most of them among the most vulnerable in India – is uncertain.

But why did Indian authorities feel the need to compose such a list? Who is being targeted? And most importantly, what’s next?

The NRC is being composed as part of a decades old campaign to identify undocumented immigrants in the state. The roots of this issue, however, goes even further back to colonial times, when tracts of forest land in Assam were designated to be cleared in an attempt to expand food production and establish tea plantations.

These projects attracted a steady flow of land-hungry and industrious migrants from neighbouring East Bengal, which at that time was part of the same vast country. These migrants helped convert forest land into paddy fields and eventually settled in the state.

But the influx of Bengali migrants into Assam did not stop with the completion of these projects. In 1947, when British India was partitioned into two independent dominions amid a cataclysm of religious violence, Assam remained a part of India while large tracts of Bengal, that have a majority Muslim population, became East Pakistan. In 1971, the people of Bengal found themselves in an even more brutal liberation struggle, this time against Pakistan. At the end of this bloody liberation war, which claimed millions of lives, Bangladesh was born. Throughout these struggles immigration from East Bengal into Assam continued steadily.

Calls for ‘detention, disenfranchisement and deportation’ of all foreigners

Over the years, Bengali migrants made significant contributions to the economy and culture of Assam, with their toil and sweat as well as their lyrical music and poetry. However, their mounting numbers stirred anxieties among the indigenous Assamese people about the preservation of their distinct culture and ownership of land. As a result, between 1979 to 1985, an “anti-foreigner” agitation targeting the Bengali immigrants erupted in the state.

The agitation – known as the Assam Movement – was mostly led by student groups, who were demanding immediate “detention, disenfranchisement and deportation” of all foreigners. The agitation reached its bloody climax on February 18, 1983, when more than 2000 Bengali Muslim men, women and children were massacred in villages across Assam’s central Nellie district. This was one of the most gruesome atrocities committed in the history of modern India, known widely as the Nellie Massacre. To this day, not a single person has been tried, let alone punished, for these killings.

Two years later, in August 1985, representatives of the government of India and the Assam Movement signed the Assam Accord in New Delhi, bringing an end to this most violent chapter in the state’s history. The accord also paved the way for the leaders of the agitation to form a political party and form a government in the state of Assam soon after.

The Assam accord contained a commitment by the government to systematically identify, disfranchise and deport those persons who entered Assam from Bangladesh after 1971, the year of its tempestuous liberation. After the signing of the accord, successive governments continued the process of identifying “foreigners” but the numbers were always limited to thousands.

In 2005, the Supreme Court of India hastened the controversial process of identification of foreigners in the state by officially shifting the burden to prove the legality of a citizenship claim from the state to the individual. It also set strict timelines for the completion of the NRC.

This was the start of a problematic and painful era for the Bengali community in Assam.

The rise of majoritarian discourse and anti-Muslim sentiments

Last week’s NRC draft that excluded nearly four million Assam residents did not come as a shock to people who have been observing the political climate in India, and in Assam, closely for the last four years.

Since the Hindu nationalist Bharatiya Janata Party (BJP) took control of the central government and the government of Assam, the anti-foreigner discourse in the state became more prominent and eventually evolved into an anti-Muslim one.

Even at the height of the agitation, the leaders of the Assam Movement had refrained from making a clear distinction between Hindu and Muslim Bengali immigrants. The BJP, however, has made it amply clear that it is opposed to only Muslim Bengali immigrants, and would welcome Hindu Bengalis into Assam. It even proposed a law that would fundamentally alter India’s citizenship laws and allow Hindus from any neighbouring country – including Afghanistan, Pakistan and Bangladesh – to acquire Indian citizenship. The draft law also proposed to extend this privilege to persons of other religions that were founded in India – Buddhist, Jain, Sikh – and even Christianity. It is unambiguous that the only unwelcome religious identity in BJP controlled India, and Assam, is of the Muslims.

Prior to becoming India’s prime minister in 2014, Narendra Modi used his campaign speeches to demonstrate his commitment to kicking Muslim Bengalis out of Assam. He even alleged that the threatened Assamese rhinoceros were being killed to make way for the Bangladeshis. Other BJP leaders, including party President Amit Shah, have long been using the emotive and pejorative term “infiltrator” to describe undocumented Muslim immigrants from Bangladesh, dubbing them a threat to India’s security. In contrast, the very same leaders describe Hindu immigrants as legitimate refugees escaping persecution in countries where they are minorities.

In other words, the majoritarian and anti-Muslim discourse the BJP used to get elected and consolidate its power contributed to the decades-old “anti-foreigner” sentiments in Assam and paved the way for the creation of the NRC draft that devastated millions.

An impossible route to legal citizenship

To be included in the NRC, Assam residents are required to produce official documents such as land ownership records, birth certificates, high school records or voter lists that would demonstrate that they – or one of their blood ancestors – had been a citizen of India on or before 1971.

On the face of it, this may seem like a reasonable and fair request. However, it is impossible for many Assam residents to meet this demand. In a country which has a long history of widespread illiteracy, poorly maintained land records and corrupt local administrations, obtaining these documents is not easy. Furthermore, many families do not register their children’s births or send them to school.

As the Chief Minister of the neighbouring state of Bengal, Mamata Banerjee, pointed out, in a country in which the majority of people don’t even know the date of their parents’ birth, how can people be expected to produce these documents? Banerjee said even she would not be able to obtain documents that categorically prove that she or her parents were Indian citizens in 1971.

This process is even more skewed against women. Women from the Bengali community in Assam typically don’t have birth certificates (like many men), and rarely stay in school long enough to get an official certificate. They are typically married off before they are 18 years old, and therefore their names don’t appear alongside their fathers’ on the voting lists. They may obtain voter lists in which their names appear next to their husbands’, but that is not accepted as proof of their citizenship.

Faced with criticism from the opposition, Indian government recently announced that it will give those excluded from the NRC extra time to file their documents. While it is highly unlikely that these people will miraculously find the necessary documents, even if they did, government does not seem to be serious about giving them a second chance. The time that the government has set aside for extra document submission is less than one month. As there are approximately four million people left out of the register, the government can hypothetically receive over 100,000 applications a day during this period. Moreover, according to the schedule, the government has set aside three months to process all the new documentation and publish the final register. This means that it plans to process tens of thousands of claims every single day until the end of this year!

The government is also silent about what will happen to the Assam residents who would eventually fail to establish their citizenship. So far, authorities only said that those excluded from the final NRC would have the opportunity to present their case before the Foreigners Tribunal.

There are 100 Foreigners Tribunals in Assam and two-thirds of these courts were established by the BJP government. These tribunals are run not by independent judicial officers but by lawyers appointed on short contracts by the state government. Moreover, most of these lawyers belong to indigenous Assamese communities. As a result, it seems highly unlikely that these tribunals will do much to help those who are excluded from the NCR.

The Assam government has established six detention centres over the past nine years for people deemed to be foreigners. As a representative of India’s statutory National Human Rights’ Commission, I was one of the few non-officials who was allowed to enter these detention centres earlier this year. What I witnessed there was in comprehensive defiance of international law, India’s constitutional guarantees and elementary humanism.

International law lays down that people of contested citizenship should not be placed in prisons, families should not be separated, and their detention should not be indefinite. All these norms are being flouted in Assam. Women are housed in one jail, their husbands in another, and children older than six years are left outside the prison.

When the Trump administration started separating children from their undocumented migrant parents at the US-Mexico border, he immediately -and rightfully- faced global outrage. In Assam, this has been the routine fate of held immigrants for the last nine years, and there is no outrage within India or outside about their desperate plight. They are not given a single day’s parole, are not allowed to speak with or meet their families in other detention centres, have no work or recreation all day, and have no legal aid to appeal against their indefinite detention.

And the July 30 NRC draft proved that millions more may find themselves in the same hellish situation in the coming days.

The protracted process to deem who are “foreigners” in Assam, although conducted under the watchful eye of India’s Supreme Court, could lead to more suffering and polarisation. If compassion is not placed at the centre of all efforts, the final NRC may set the stage for another round of blood-letting, akin to the one we witnessed in the 1980s and yet another harvest of electoral victories built ultimately on the further suffering of these impoverished communities.

Harsh Mander is a human rights worker and author.