One Million Muslim Uighurs Have Been Detained by China, the U.N. Says. Where’s the Global Outrage? 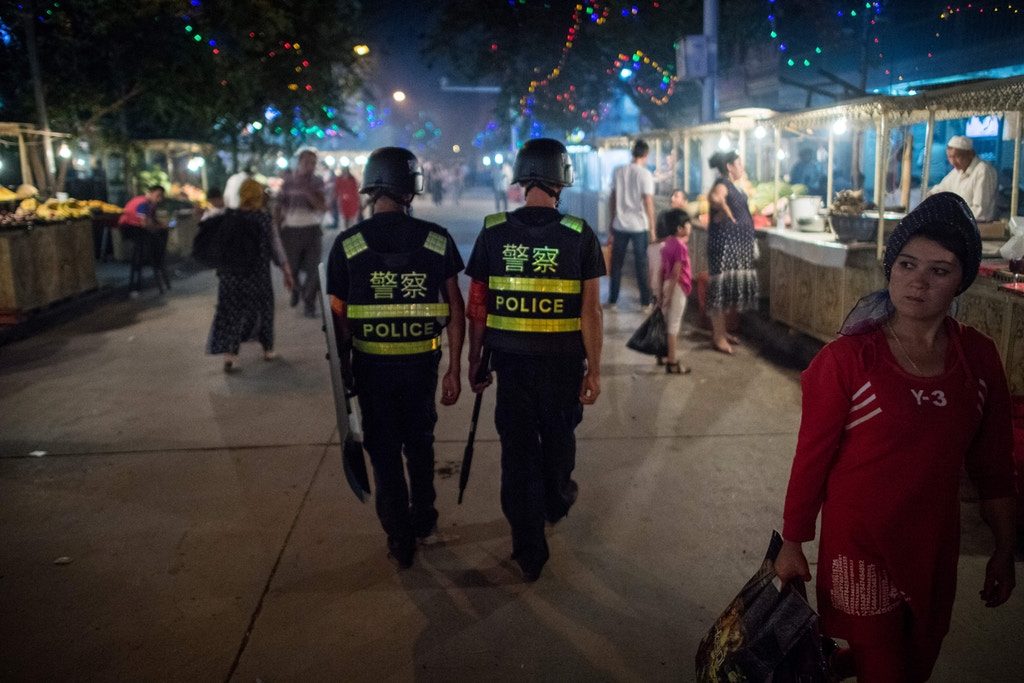 Police patrol in a night food market near the Id Kah Mosque in Kashgar in China’s Xinjiang Uighur Autonomous Region on June 25, 2017, a day before the Eid al-Fitr holiday.
Photo: Johannes Eisele/AFP/Getty Images

13 Aug 2018 – It was on September 16, 2001, five days after the 9/11 attacks, that President George W. Bush declared his now-infamous “war on terrorism.” Other governments around the world followed suit — but few matched the speed, intensity, and sheer cynicism with which the autocrats in Beijing aligned themselves with the Bush administration.

Dogged by protests and revolts from a Turkic-speaking Muslim minority called the Uighurs in the vast and autonomous Central Asian border region of Xinjiang — or East Turkestan, as it is historically referred to by the Uighurs — the Chinese spotted an opportunity. In the weeks and months after 9/11, Beijing began submitting documents to the United Nations alleging that the East Turkestan Islamic Movement, or ETIM — a group that few people had ever heard of, or could even confirm the existence of — was a “major component of the terrorist network headed by Osama bin Laden” and “an important part of his terrorist forces.” By September 2002, both the U.N. and the United States had listed ETIM as a “terrorist organization” — throwing the Uighurs under the geopolitical bus.

One. Million. People. There are around 11 million Uighurs living in Xinjiang, which means that almost one in 10 of them has been detained.

Fast forward 17 years: On Friday, a panel of U.N. human rights experts said Uighurs in Xinjiang were being treated as “enemies of the state” and announced that it had received credible reports about the “arbitrary and mass detention of almost 1 million Uighurs” in “counter-extremism centers.”

One. Million. People. It’s an astonishingly high number. In the context of the Uighur population as a whole, it’s even more shocking: There are around 11 million Uighurs living in Xinjiang, which means that almost one in 10 of them has been detained, according to the U.N. How is this not anything other than one of the biggest, and most underreported, human rights crises in the world today? 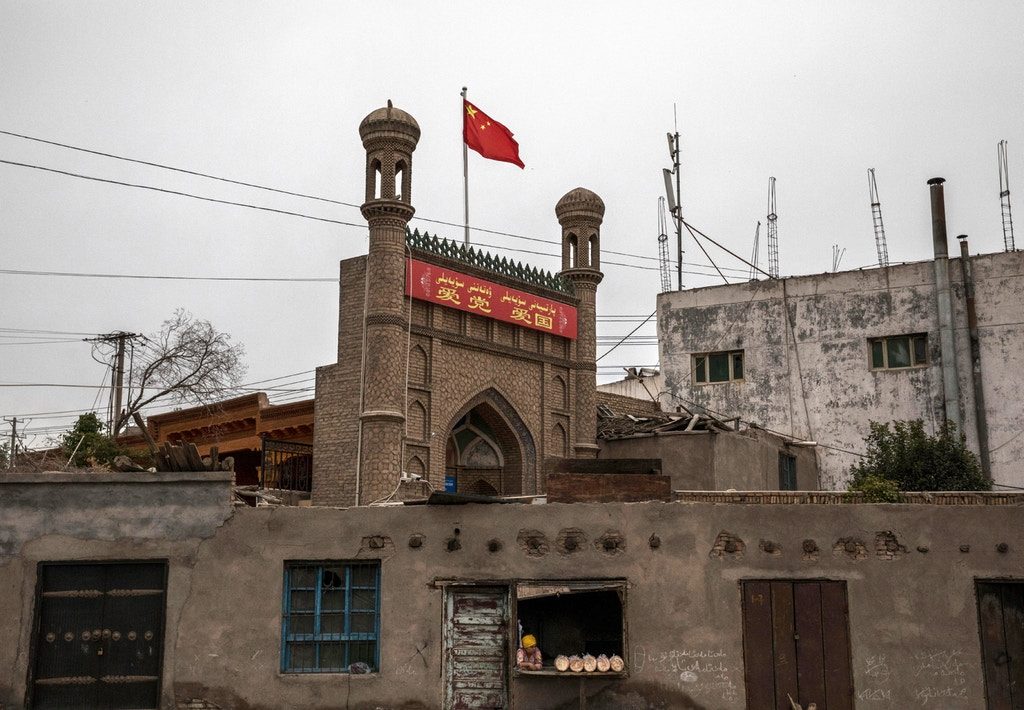 A Chinese flag flies over a local mosque that had been closed by authorities as an ethnically Uighur woman sells bread at her bakery on June 28, 2017, in the old town of Kashgar, in the far western Xinjiang province, China. Photo: Kevin Frayer/Getty Images

To be clear, the Chinese have launched vicious crackdowns against the Uighurs on several occasions since 9/11 — most notably, the “strike hard and punish” campaign of 2009. In fact, ever since Chinese communist forces conquered and occupied the short-lived East Turkestan Republic in 1949 and turned it into the Xinjiang Uighur Autonomous Region, any attempts by Uighurs to demand greater freedom or autonomy from Beijing have been brutally stamped out. This, it seems, is how the Chinese do “assimilation.”

Yet, as Amnesty International’s Nicholas Bequelin told me, the sheer scale of this latest crackdown should be seen as a “turning point.” The Chinese government is currently “engaged in a mass brainwashing operation that requires the detention of hundreds of thousands of people, arbitrarily, outside of any legal framework, in order to subject them to intense political indoctrination, in the hope that this will make them into a more compliant and loyal political entity,” Bequelin said.

It won’t work, of course. As Bequelin pointed out, “There is no way that China can ensure it has sufficient loyalty from the Uighur people.” The Chinese, he said, will instead “create a generation with very deep grievances because they are detained outside of any kind of legal framework and they are treated as colonial subjects.” Every colonial project, he added, “generates its own anti-colonial project.” 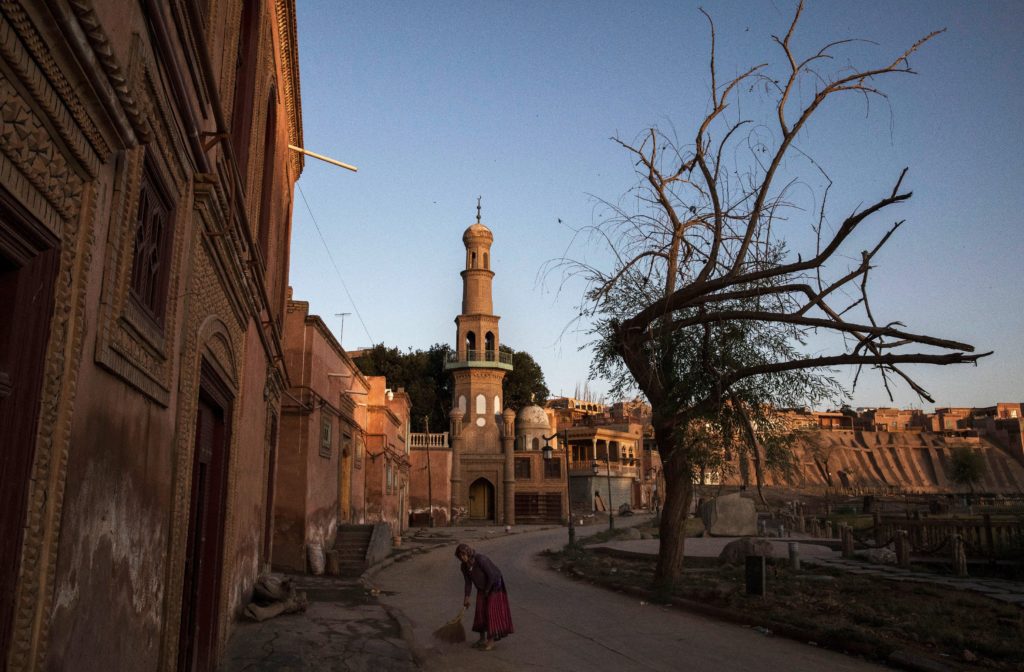 A Uighur woman sweeps outside her house on July 1, 2017, in the old town of Kashgar, in the far western Xinjiang province, China. Photo: Kevin Frayer/Getty Images

As with the U.S. presence in Afghanistan and Iraq, and Israel’s occupation of the West Bank and Gaza, China’s war on terror in Xinjiang risks becoming a self-fulfilling prophecy. But the Chinese — like the Americans and the Israelis — don’t really give a damn about alleged terrorist threats. This has much less to do with security and much more to with politics. Beijing is asserting control over a restless province that borders eight countries — including Pakistan and Afghanistan. Other economic factors come into play, too: Xinjiang is home to the country’s largest reserves of coal and natural gas.

Fighting terrorism, though, has become a useful cover for authoritarian governments around the world. Bequelin, who is the East Asia director at Amnesty International and a former visiting scholar at Yale Law School’s China Center, draws a “direct line” from the Bush declaration of a war on terror in 2001 to the repression of the Uighurs in 2018. “The war on terror rhetoric immensely benefitted the Chinese,” said Bequelin. “It was a 180-degree turn for the discourse of the Chinese state with respect to its ability in Xinjiang: from minimizing and trying to hide it to casting its efforts and suppression of any form of dissent as ‘counterterrorism.’ So there is a direct line here.”

“The war on terror rhetoric immensely benefited the Chinese.”

That isn’t to say that Uighur militant groups are a myth, but the few that do exist are small, weak, and pose very little threat to the Chinese state. Most are inspired by local factors rather than international alliances. To quote Michael Clarke, an Australian academic who has studied Xinjiang, “It’s not that China shouldn’t be concerned about [global terrorist ties], but the core issue is that the linkages have been exaggerated by the Chinese government.”

It isn’t encouragement from the Islamic State or Al Qaeda, Bequelin noted, but the ongoing persecution in Xinjiang that “will drive certain people to embrace radical forms of anti-state protests, including violence” — maybe even “using the jihadi grammar to oppose the state.” Think about it: Since 9/11, jihadist groups have succeeded in recruiting young and angry Muslim men from across the globe by claiming their enemies are fighting a “war against Islam.” But why should the Uighurs have to watch propaganda videos online when they can see what is happening in front of their eyes?

The Chinese government seems bent on humiliating and abusing the Muslims of Xinjiang. In recent years, Beijing has banned Uighur parents from naming their sons “Muhammad”; children from entering mosques; and government employees from fasting during Ramadan. Muslim men are prohibited from growing “abnormally” long beards, while Muslim women cannot wear the face veil in public.

Then there are the “political camps for indoctrination,” cited by the U.N. panel last week, in which hundreds of thousands of detainees are forced to shout Communist Party slogans; declare their loyalty only to the Chinese dictator, President Xi Jinping; and are “lectured about the dangers of Islam.”

The word “Orwellian,” therefore, does not do justice to the harrowing accounts of abuses coming out of Xinjiang, rightly dubbed a “police state” and “apartheid with Chinese characteristics” by The Economist. The U.N. panel said it was a “massive internment camp” — “a sort of ‘no-rights zone.’” 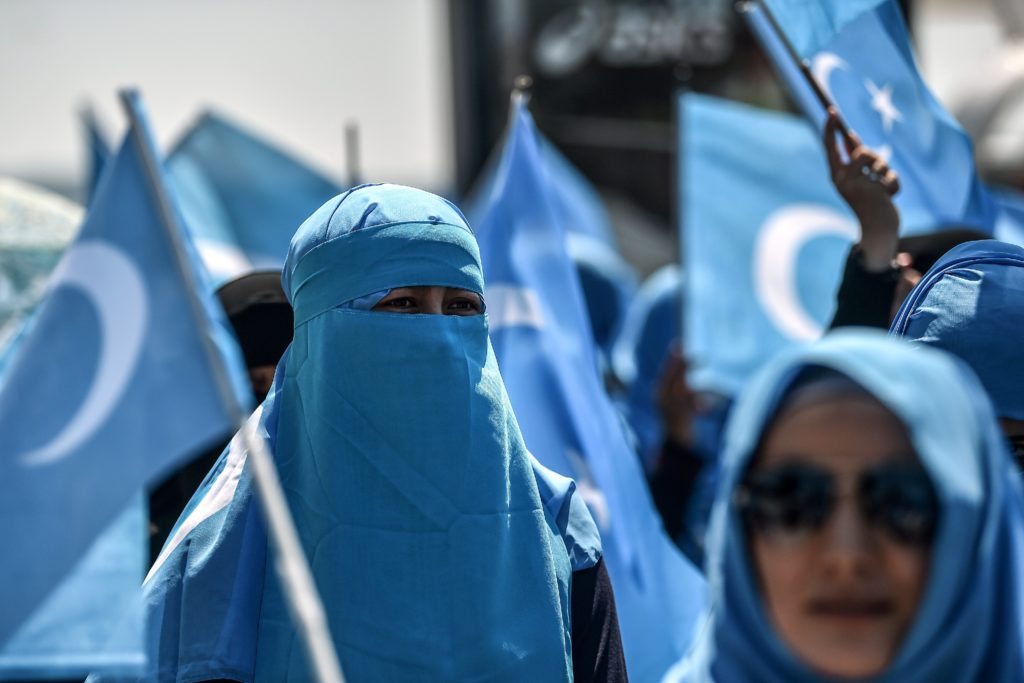 Demonstrators attend a protest in front of the Chinese consulate in Istanbul, on July 5, 2018, to denounce China’s treatment of ethnically Uighur Muslims during a deadly riot in July 2009. Photo: Ozan Kose/AFP/Getty Images

So where is the global outcry? Where are the protests from Western governments, which so often claim to value human rights above all else? President Donald Trump says he has “a lot of respect for China” and likes to brag that Xi Jinping is “a friend of mine.” On a visit to China earlier this year, British Prime Minister Theresa May won plaudits from Chinese state-run media for being “pragmatic” and ignoring Western journalists and activists who “keep pestering [her] to criticize Beijing” over human rights abuses. Her fellow European leader, Chancellor Angela Merkel of Germany, has visited China 11 times in 12 years — but has never publicly raised the issue of the Uighurs on any of those trips.

Where is the outrage from the governments of majority-Muslim countries, which so often claim to speak on behalf of their oppressed Muslim brothers and sisters across the globe?

Where is the outrage from the governments of majority-Muslim countries, which so often claim to speak on behalf of their oppressed Muslim brothers and sisters across the globe? They are loud in their condemnation of Israel’s subjugation of the Palestinians and Myanmar’s ethnic cleansing of the Rohingya. But a million Muslims behind bars? Beards and veils banned? Imams humiliated? The news out of Xinjiang has been met only with radio silence from the 57 member states of the Organization of Islamic Cooperation. Take the Turkish government, which in the past has spoken out in defense of the Turkic-speaking Uighurs, but these days is keen on cozying up to Beijing. Or consider the Iranian government, which not long ago announced a “new chapter” in Tehran-Beijing relations, praising China for having stood “by the side of the Iranian nation during hard days.”

We are an occupied territory,” said Uighur diaspora leader Anwar Yusuf Turani, in 2015. “We know the plights of our Muslim brothers and sisters in Palestine, Kashmir, but why doesn’t the Muslim world know about our struggle?”

It’s a good question. Some might say it is unrealistic to expect Western or Middle Eastern countries to stand up to China, which has such massive political and economic leverage over them. According to Amnesty’s Bequelin, though, leverage works both ways. He points to the fact that the European Union is China’s biggest trade partner, so of course “the EU can do a lot more.”

“It’s an easy justification to say countries can’t say anything because China is too important to them as an investor or trade partner,” he said. Yet, “if Egypt, or Turkey, or the OIC, or a broad alliance at the United Nations, were to start asking questions that are raising legitimate concerns and did not sound hostile … it could put China on the back foot and might ultimately lead the leadership [in Beijing] to change their calculations about what they’re doing in Xinjiang.”

So far, however, both liberals in the West and Muslims in the East have utterly failed the Uighurs of Xinjiang. The Uighurs are being subjected to a brutal and vile campaign of cultural cleansing, of mass detention, torture, and brainwashing at the hands of the Chinese Communist Party in Beijing, while the rest of us stand by and watch. How is this happening in 2018? We should all hang our heads in shame.