Secretary-General Guterres presented four options to protect Palestinians under occupation; observers say none are likely to be applied. 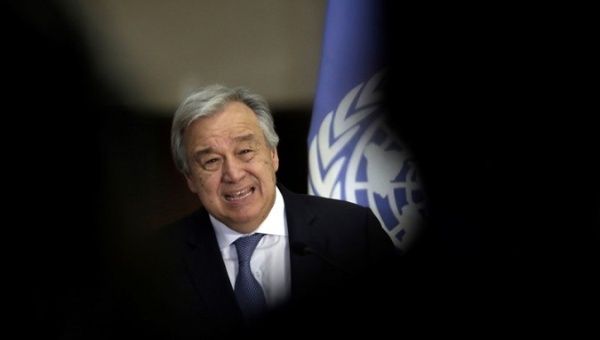 The proposal was one of four laid out by Guterres in a 14-page report. Other options include providing a “more robust United Nations presence on the ground” with rights monitors and political officers, providing more humanitarian and development aid to “ensure the well-being of the population,” creating a civilian observer mission to be present in sensitive areas such as military checkpoints and Israel’s illegal settlements.

Guterres’ report is a response to a U.N. General Assembly resolution adopted in June by 120 states that condemned “Israel’s excessive and disproportionate use of force” against protesters in the besieged Gaza Strip in the context of the Great March of Return, and tasked Guterres with recommending an “international protection mechanism” for the Palestinians.

All of the options presented by Guterres seem unlikely according to observers and activists.

The United Nations Relief and Works Agency for Palestine Refugees (UNRWA), which sole mandate is to provide humanitarian and development aid to the millions of Palestinian refugees has been dramatically underfunded after the United States decided to slash its contributions to the U.N. body.

The United States cut US$300 million in funding for UNRWA earlier this year in an effort to pressure the Palestinian Authority into a U.S.-mediated dialogue with Israel. The PA refused a U.S.-mediated dialogue after U.S. president Donald Trump announced his intentions to move the U.S. embassy from Tel Aviv, Israel’s capital city, to the occupied city of Jerusalem.

Trump moved the embassy on the eve of the Palestinian Nakba, which commemorated the over 700,000 Palestinians who had to flee their cities and towns after Israel declared its independence on May 14, 1948.

UNRWA currently has a US$217 million budget shortfall.

U.S. attacks on UNRWA are far from over. Emails published this month by Foreign Policy magazine revealed Jared Kushner, Trump’s senior Middle East adviser, and son-in-law has been pushing to remove the refugee status of millions of Palestinians to shut down UNRWA.

Furthermore, Israel has refused to allow observer mission in flashpoints and has increasingly prevented human rights activists from entering the country. So it is unlikely it will give the U.N. a green light for this option.

The armed option will require approval by the U.N. Security Council, in which Israel’s greatest ally, the U.S. has veto power.

In the report, Guterres also criticised Israel’s expansion of illegal settlements saying it “continues unabated and constitutes a flagrant violation under international law,” and lamented the high number of Palestinian casualties since the Great March of Return began on March 30 arguing it “reflects an alarming trend of the use of lethal force by Israeli… forces against individuals who may not pose a threat of imminent death or serious injury.”

Guterres’ report comes as Gaza’s Health Ministry reported Friday two Palestinians were killed and 270 were injured by Israeli occupation forces during protests near the Gaza fence.

While the United States cuts aid to Palestinians, Israel will receive the biggest military aid package in history.