The U.S. Is Defending al-Qaeda in Idlib 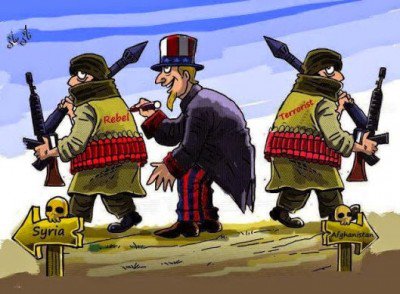 3 Sep 2018 – Assad was supposed to be gone already. President Obama thought it would be just another “regime change” operation and perhaps Assad would end up like Saddam Hussein or Yanukovych. Or maybe even Gaddafi. But he was supposed to be gone. The US spent billions to get rid of him and even provided weapons and training to the kinds of radicals that attacked the United States on 9/11.

But with the help of his allies, Assad has nearly defeated this foreign-sponsored insurgency.

The US fought him every step of the way. Each time the Syrian military approached another occupied city or province, Washington and its obedient allies issued the usual warnings that Assad was not liberating territory but was actually seeking to kill more of his own people.

Remember Aleppo, where the US claimed Assad was planning mass slaughter once he regained control? As usual the neocons and the media were completely wrong. Even the UN has admitted that with Aleppo back in the hands of the Syrian government hundreds of thousands of Syrians have actually moved back. We are supposed to believe they willingly returned so that Assad could kill them?

The truth is Aleppo is being rebuilt. Christians celebrated Easter there this spring for the first time in years. There has been no slaughter once al-Qaeda and ISIS’ hold was broken. Believe me, if there was a slaughter we would have heard about it in the media!

So now, with the Syrian military and its allies prepare to liberate the final Syrian province of Idlib, Secretary of State Mike Pompeo again warns the Syrian government against re-taking its own territory. He Tweeted on Friday that: “The three million Syrians, who have already been forced out of their homes and are now in Idlib, will suffer from this aggression. Not good. The world is watching.”

President Trump’s National Security Advisor, John Bolton, has also warned the Syrian government that the US will attack if it uses gas in Idlib. Of course, that warning serves as an open invitation to rebels currently holding Idlib to set off another false flag and enjoy US air support.

Bolton and Pompeo are painting Idlib as a peaceful province resisting the violence of an Assad who they claim just enjoys killing his own people. But who controls Idlib province? President Trump’s own Special Envoy for the Global Coalition to Counter ISIS, Brett McGurk, said in Washington just last year that, “Idlib province is the largest al-Qaeda safe-haven since 9/11, tied to directly to Ayman al Zawahiri, this is a huge problem.”

Could someone please remind Pompeo and Bolton that al-Qaeda are the bad guys?

After six years of a foreign-backed regime-change operation in Syria, where hundreds of thousands have been killed and the country nearly fell into the hands of ISIS and al-Qaeda, the Syrian government is on the verge of victory. Assad is hardly a saint, but does anyone really think al-Qaeda and ISIS are preferable? After all, how many Syrians fled the country when Assad was in charge versus when the US-backed “rebels” started taking over?

Americans should be outraged that Pompeo and Bolton are defending al-Qaeda in Idlib. It’s time for the neocons to admit they lost. It is time to give Syria back to the Syrians. It is time to pull the US troops from Syria. It is time to just leave Syria alone!

Ronald Ernest Paul (born 20 Aug 1935) is an American author, physician, and retired politician. On three occasions, he sought the presidency of the United States: in 1988, 2008 and 2012. Paul is a critic of the existence of the Federal Reserve, the military–industrial complex, and the War on Drugs. He has also been a vocal critic of mass surveillance policies such as the USA Patriot Act and the NSA surveillance programs.

Copyright © 2018 by RonPaul Institute. Permission to reprint in whole or in part is gladly granted, provided full credit and a live link are given.