Conjuring Up the Next Depression 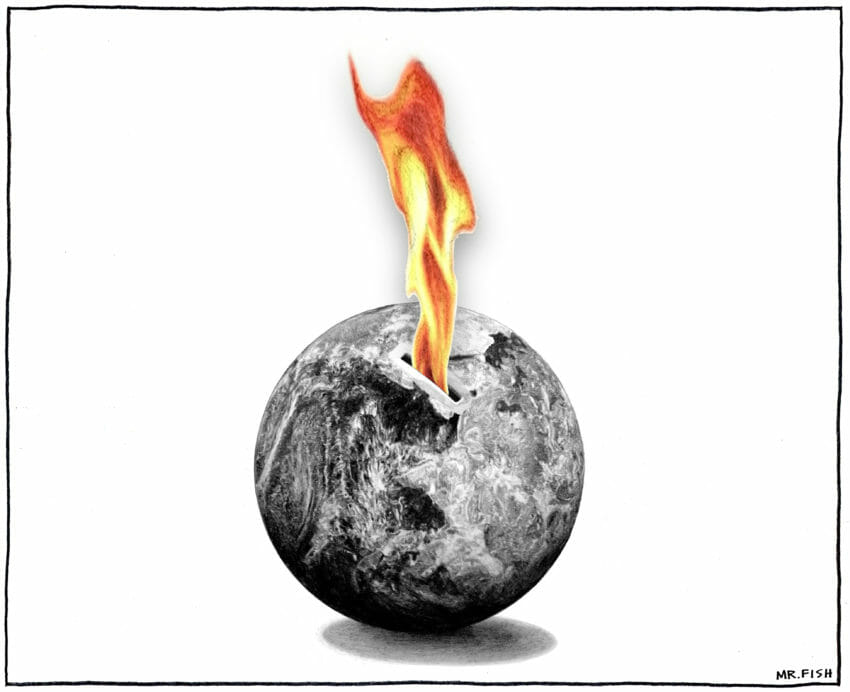 What will trigger the next crash? The $13.2 trillion in unsustainable U.S. household debt? The $1.5 trillion in unsustainable student debt? The billions Wall Street has invested in a fracking industry that has spent $280 billion more than it generated from its operations? Who knows. What is certain is that a global financial crash, one that will dwarf the meltdown of 2008, is inevitable. And this time, with interest rates near zero, the elites have no escape plan. The financial structure will disintegrate. The global economy will go into a death spiral. The rage of a betrayed and impoverished population will, I fear, further empower right-wing demagogues who promise vengeance on the global elites, moral renewal, a nativist revival heralding a return to a mythical golden age when immigrants, women and people of color knew their place, and a Christianized fascism.

The 2008 financial crisis, as the economist Nomi Prins points out, “converted central banks into a new class of power brokers.” They looted national treasuries and amassed trillions in wealth to become politically and economically omnipotent. In her book “Collusion: How Central Bankers Rigged the World,” she writes that central bankers and the world’s largest financial institutions fraudulently manipulate global markets and use fabricated, or as she writes, “fake money,” to inflate asset bubbles for short-term profit as they drive us toward “a dangerous financial precipice.”

“Before the crisis, they were just asleep at the wheel, in particular, the Federal Reserve of the United States, which is supposed to be the main regulator of the major banks in the United States,” Prins said when we met in New York. “It did a horrible job of doing that, which is why we had the financial crisis. It became a deregulator instead of a regulator. In the wake of the financial crisis, the solution to fixing the crisis and saving the economy from a great depression or recession, whatever the terminology that was used at any given time, was to fabricate trillions and trillions of dollars out of an electronic ether.”

The Federal Reserve handed over an estimated $29 trillion of this fabricated money to American banks, according to researchers at the University of Missouri. Twenty-nine trillion dollars! We could have provided free college tuition to every student or universal health care, repaired our crumbling infrastructure, transitioned to clean energy, forgiven student debt, raised wages, bailed out underwater homeowners, formed public banks to invest at low interest rates in our communities, provided a guaranteed minimum income for everyone and organized a massive jobs program for the unemployed and underemployed. Sixteen million children would not go to bed hungry. The mentally ill and the homeless—an estimated 553,742 Americans are homeless every night—would not be left on the streets or locked away in our prisons. The economy would revive. Instead, $29 trillion in fabricated money was handed to financial gangsters who are about to make most of it evaporate and plunge us into a depression that will rival that of the global crash of 1929.

An emergency clause in the Federal Reserve Act of 1913 allows the Fed to provide liquidity to a distressed banking system. But the Federal Reserve did not stop with the creation of a few hundred billion dollars. It flooded the financial markets with absurd levels of fabricated money. This had the effect of making the economy appear as if it had revived. And for the oligarchs, who had access to this fabricated money while we did not, it did.

The Fed cut interest rates to near zero. Some central banks in Europe instituted negative interest rates, meaning they would pay borrowers to take loans. The Fed, in a clever bit of accounting, even permitted distressed banks to use these no-interest loans to buy U.S. Treasury bonds. The banks gave the bonds back to the Fed and received a quarter of a percent of interest from the Fed. In short, the banks were loaned money at virtually no interest by the Fed and then were paid interest by the Fed on the money they borrowed. The Fed also bought up worthless mortgage assets and other toxic assets from the banks. Since Fed authorities could fabricate as much money as they wanted, it did not matter how they spent it.

“It’s like going to someone’s old garage sale and saying, ‘I want that bicycle with no wheels. I’ll pay you 100 grand for it. Why? Because it’s not my money,’ ” Prins said.

“These people have rigged the system,” she said of the bankers. “There is money fabricated at the top. It is used to pump up financial assets, including stock. It has to come from somewhere. Because money is cheap there’s more borrowing at the corporate level. There’s more money borrowed at the government level.”

“Where do you go to repay it?” she asked. “You go into the nation. You go into the economy. You extract money from the foundational economy, from social programs. You impose austerity.”

Given the staggering amount of fabricated money that has to be repaid, the banks need to build greater and greater pools of debt. This is why when you are late in paying your credit card the interest rate jumps to 28 percent. This is why if you declare bankruptcy you are still responsible for paying off your student loan, even as 1 million people a year default on student loans, with 40 percent of all borrowers expected to default on student loans by 2023. This is why wages are stagnant or have declined while costs, from health care and pharmaceutical products to bank fees and basic utilities, are skyrocketing. The enforced debt peonage grows to feed the beast until, as with the subprime mortgage crisis, the predatory system fails because of massive defaults. There will come a day, for example, as with all financial bubbles, when the wildly optimistic projected profits of industries such as fracking will no longer be an effective excuse to keep pumping money into failing businesses burdened by debt they cannot repay.

“The 60 biggest exploration and production firms are not generating enough cash from their operations to cover their operating and capital expenses,” Bethany McLean writes of the fracking industry in an article titled “The Next Financial Crisis Lurks Underground” that appeared in The New York Times. “In aggregate, from mid-2012 to mid-2017, they had negative free cash flow of $9 billion per quarter.”

The global financial system is a ticking time bomb. The question is not if it will explode but when it will explode. And once it does, the inability of the global speculators to use fabricated money with zero interest to paper over the debacle will trigger massive unemployment, high prices for imports and basic services, and a devaluation in which the dollar will become nearly worthless as it is abandoned as the world’s reserve currency. This manufactured financial tsunami will transform the United States, already a failed democracy, into an authoritarian police state. Life will become very cheap, especially for the vulnerable—undocumented workers, Muslims, poor people of color, girls and women, anti-capitalist and anti-imperialist critics branded as agents of  foreign powers—who will be demonized and persecuted for the collapse. The elites, in a desperate bid to cling to their unchecked power and obscene wealth, will disembowel what is left of the United States.