Explosive Skripal Allegations May Blow Up in Syria 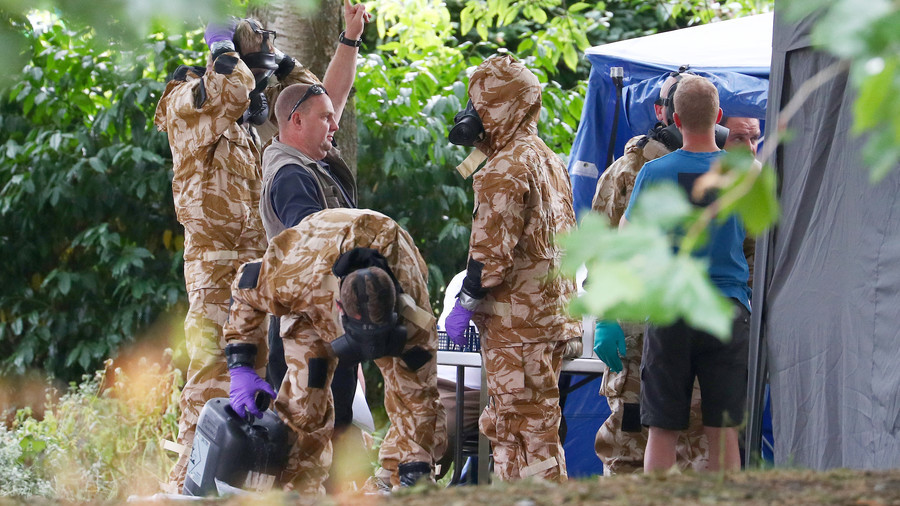 11 Sep 2018 – Explosive Skripal allegations will probably blow up in Syria’s Idlib where the US/UK axis is cocked, ready to fire. The UK media lost their collective mind over Russia but their masters have not. There is method in their madness.

Today’s latest offering is that the ‘Russians’ in the ‘mugshots’ released last week are ‘already dead’ having been ‘executed by Putin’ to stop them talking, forever. Which neatly avoids the British state asking Russia for help in identifying them. London’s failure to do so was already arousing suspicion amongst a cynical public. There is now no point, the would-be assassins are now six-feet below the permafrost of Anglo-Russian relations.

The media here have completely ignored the statement of the head of the anti-terrorist squad of Scotland Yard that he had “No” evidence of Russian state involvement in the crime in Salisbury, preferring instead the cheap barroom brawling of the British prime minister on the floor of the House of Commons cheered on by the vulgar popular press and their more refined elder sisters in the upmarket papers and on the BBC.

I prefer to listen to the police. And watch them. Their most significant act since I last wrote here on this subject has been to erect an array of tents outside the Skripal house in Salisbury which the government had been planning to purchase at way above value by British taxpayers expense. The “decontamination of the house” is the stated purpose.

But as I hope I established here last week the poisoning of Yulia and Sergei Skripal could not have been caused by “Novichok” on the doorknob.

The Skripal’s left the house before 9.15am on the fateful morning of March 4 and there is NO evidence that they ever returned to it. There is ample CCTV footage of the couple driving away from their house from 9.15am onwards but none of them driving back to it.

As the ‘Russian mugs,’ by the police’s own testimony shows, didn’t arrive in Salisbury until 11.48am, if they did paint the Skripal doorknob with the “deadliest nerve agent known to man – 8-10 times more deadly than VX” their horses had already bolted. If they did paint the doorknob they did so at around noon in broad-daylight, when the neighbours were coming home from church, doing their gardens, washing their cars and in full view of the whole street. They wore no protective clothing while doing it. And they then sauntered through the town centre, window-shopping and being caught on every town centre CCTV camera. If any neighbour, who had seen them painting the door, had called the police (and the ‘mugs’ couldn’t be sure that nobody had) they would have now been arrested rather than ‘buried under the frost’.

As it was they caught the highly unreliable Sunday service public transport route from Salisbury to Heathrow which, as a British tabloid journalist opined, “no sane Englishman with a plane to catch would ever do.”

So, if the police are now in the Skripal house in numbers and with intent, it cannot be on account of the doorknob – both for the reasons stated but also because a police officer stood right outside the Skripal house day and night for weeks after the event without even a pair of rubber dishwashing-gloves on with no ill-effect whatsoever.

This development buttresses my working hypothesis that however it got there a quantity of this “Novichok” was IN the Skripal house and not painted on its doorknob. This hypothesis is necessary also to explain the poisoning of the poor British plainclothes detective DS Bailey who seemed to have had no contact with the collapsed Skripals on the park bench but is the sole individual to be poisoned at the house. If, for the reasons I’ve stated, it was not on the doorknob then he can only have been poisoned indoors.

Another police statement roundly ignored by the British media was the answer Scotland Yard’s Assistant Commissioner Neil Basu, the head of UK counter-terrorism policing, gave to a question asked at his press conference by the BBC.

“What kind of visa did the Russians enter Britain on?”

“I don’t know” was the reply. Not that for operational reasons he didn’t want to say. But that he didn’t know.

I know the commander and have a high respect for his professional experience. I know that he cannot have failed to ask the Home Office this question. I know that the Home Office must know the answer to the question. The only logical inference therefore is that the Home Office – which will have vetted the visa applications before the consulate in Moscow could have been instructed to issue them – has refused to tell the commander in charge of investigating the crime this basic and vital piece of information.

According to the Wall St Journal, the US has concluded that the Syrian regime of Bashar Assad is about to unleash a “chemical weapons attack” on the very last stronghold of Al-Qaeda and Islamic State (IS, formerly ISIS) fighters in Syria. We are asked to believe that having won the war Assad seeks to snatch defeat from the jaws of victory by bringing the axis powers back full-scale into the Syrian war.

Whilst no-one but the least savvy of sheep is likely to believe that casus belli it is nonetheless all that the war-party has got to justify an expected new blizzard of cruise missiles and maybe more. Behind the Syrian Army stands of course the Russian Armed Forces, the very same Russia that has already ‘started chemical weapons warfare’ on the streets of Salisbury. However explosive Mrs May’s words were in the British parliament they will soon be drowned out by the din of war in Idlib.