An Antidote to White Male Capitalist Culture: Adrienne Rich on the Liberating Power of Storytelling and How Reading Emancipates 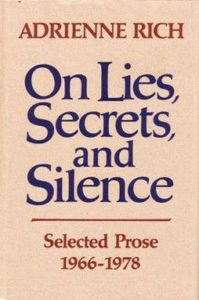 “The decline in adult literacy means not merely a decline in the capacity to read and write, but a decline in the impulse to puzzle out, brood upon… argue about, turn inside-out in verbal euphoria, the ‘incomparable medium’ of language…”

“Books are key to understanding the world and participating in a democratic society,” Carl Sagan insisted at the end of his life in arguing for reading as the path to democracy. “Someone reading a book is a sign of order in the world,” wrote the poet Mary Ruefle a generation later.

Long before Sagan and Ruefle, Adrienne Rich (May 16, 1929–March 27, 2012) examined the emancipatory power of reading in her preface to On Lies, Secrets, and Silence: Selected Prose 1966–1978 (public library) — the indispensable collection of essays and speeches that gave us Rich on honorable human relationships and what “truth” really means. 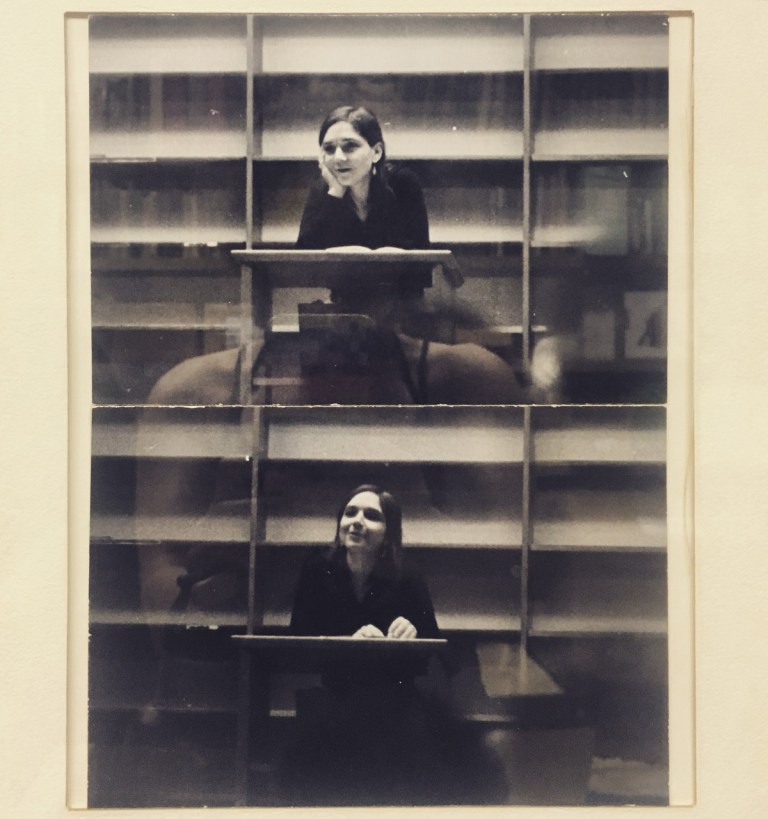 Writing in 1978, Rich considers the gendered power dynamics of the written word:

The decline in adult literacy means not merely a decline in the capacity to read and write, but a decline in the impulse to puzzle out, brood upon, look up in the dictionary, mutter over, argue about, turn inside-out in verbal euphoria, the “incomparable medium” of language — Tillie Olsen’s term. And this decline comes, ironically, at a moment in history when women, the majority of the world’s people, have become most aware of our need for real literacy, for our own history, most searchingly aware of the lies and distortions of the culture men have devised, when we are finally prepared to take on the most complex, subtle, and drastic revaluation ever attempted of the condition of the species.

Contemplating what the television screen has displaced — a displacement of critical thinking only exacerbated by the computer and smartphone screens in the decades since — Rich presages the problem of wisdom in the age of information and writes:

People grow up who not only don’t know how to read, a late-acquired skill among the world’s majority; they don’t know how to talk, to tell stories, to sing, to listen and remember, to argue, to pierce an opponent’s argument, to use metaphor and imagery and inspired exaggeration in speech; people are growing up in the slack flicker of a pale light which lacks the concentrated bum of a candle flame or oil wick or the bulb of a gooseneck desk lamp: a pale, wavering, oblong shimmer, emitting incessant noise, which is to real knowledge or discourse what the manic or weepy protestations of a drunk are to responsible speech. Drunks do have a way of holding an audience, though, and so does the shimmery ill-focused oblong screen.

Rich condemns this unthinking mesmerism as “a culture of manipulated passivity” and casts it as a primary tool of upholding society’s age-old power structures, particularly patriarchal power. (Several years earlier, James Baldwin had reflected on how reading helped him break out of society’s racial power structure.) She contrasts this “manipulated passivity” with how women regard the world, pointing to reading and storytelling as vital tools of empowerment and emancipation:

Women’s culture, on the other hand, is active: women have been the truly active people in all cultures, without whom human society would long ago have perished, though our activity has most often been on behalf of men and children. Today women are talking to each other, recovering an oral culture, telling our life-stories, reading aloud to one another the books that have moved and healed us, analyzing the language that has lied about us, reading our own words aloud to each other. But to name and found a culture of our own means a real break from the passivity of the twentieth-century Western mind. 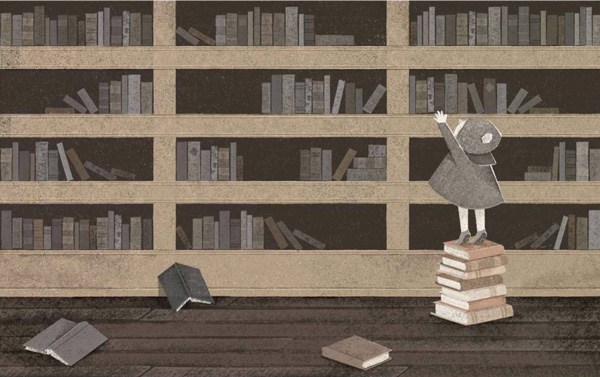 Illustration from The Book of Memory Gaps by Cecilia Ruiz

Arguing that “to conjure with the passive culture and adapt to its rules is to degrade and deny the fullness of our meaning and intention,” she considers what an alternative culture might look like:

To question everything. To remember what it has been forbidden even to mention. To come together telling our stories, to look afresh at, and then to describe for ourselves, the frescoes of the Ice Age, the nudes of “high art,” the Minoan seals and figurines, the moon-landscape embossed with the booted print of a male foot, the microscopic virus, the scarred and tortured body of the planet Earth. To do this kind of work takes a capacity for constant active presence, a naturalist’s attention to minute phenomena, for reading between the lines, watching closely for symbolic arrangements, decoding difficult and complex messages left for us by women of the past. It is work, in short, that is opposed by, and stands in opposition to, the entire twentieth-century white male capitalist culture.

On Lies, Secrets, and Silence remains an indispensable read. Complement this particular portion with Gwendolyn Brooks on the power of books, Rebecca Solnit on why we read and write, Anaïs Nin on how books awaken us from the slumber of almost-living, and Mary Oliver on how reading saved her life, then revisit Rich on the political power of poetry, how silence fertilizes the imagination, and her stunning tribute to women in astronomy.

One Response to “An Antidote to White Male Capitalist Culture: Adrienne Rich on the Liberating Power of Storytelling and How Reading Emancipates”