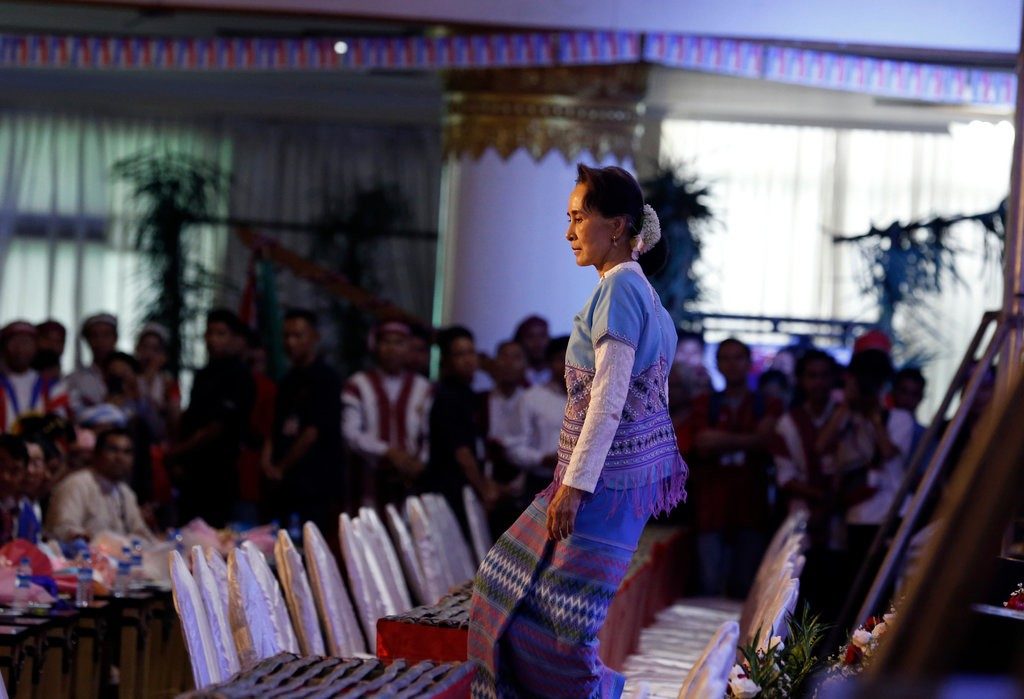 “Rarely has the reputation of a leader fallen so far, so fast,” the International Crisis Group said of Daw Aung San Suu Kyi.
Nyein Chan Naing/EPA, via Shutterstock

29 Sep 2018 — Over a span of a month, a pro-military newspaper columnist, U Ngar Min Swe, wrote 10 brief Facebook posts accusing Myanmar’s civilian leader, Daw Aung San Suu Kyi, of taking bribes and dividing the country. In one post, without naming her, he suggested that she was a “power-mad prostitute.”

After the police brought charges of sedition, a judge found him guilty and sentenced him this month to seven years in prison.

Ms. Aung San Suu Kyi’s government could have kept the case from reaching court. But for the Nobel Peace laureate and onetime democracy icon, suppressing criticism has become a hallmark of her leadership.

“If the government continues in this way, we will never achieve democracy and we will go back to being a dictatorship,” said Maung Saungkha, a free speech advocate who served six months in prison under the previous government.

Much of the world had high hopes for Myanmar two and a half years ago, when Ms. Aung San Suu Kyi came to power.

So much has changed.

Once a symbol of resistance to military rule, Ms. Aung San Suu Kyi is known today as an enabler of ethnic cleansing and a foe of press freedom. Hopes that she would use her party’s majority in Parliament to encourage badly needed economic growth and abolish oppressive laws have faded.

Now, about halfway through her National League for Democracy party’s five-year term in office, Myanmar is in danger of again becoming a pariah state, as it was under the rule of the generals who once kept her under house arrest.

“Rarely has the reputation of a leader fallen so far, so fast,” concluded a recent report by the Brussels-based International Crisis Group.

Since August, Western powers and international organizations have taken significant steps to punish Myanmar for its military’s use of rape, arson and murder to drive more than 700,000 Rohingya Muslims out of the country. The United States imposed targeted sanctions, a United Nations mission called for top generals to face genocide charges and judges of the International Criminal Court ruled that they have the authority to investigate the matter.

Myanmar is also under pressure to free two Reuters journalists, U Wa Lone, 32, and U Kyaw Soe Oo, 28, who were sentenced this month to seven years in prison after reporting on killings of Rohingya. 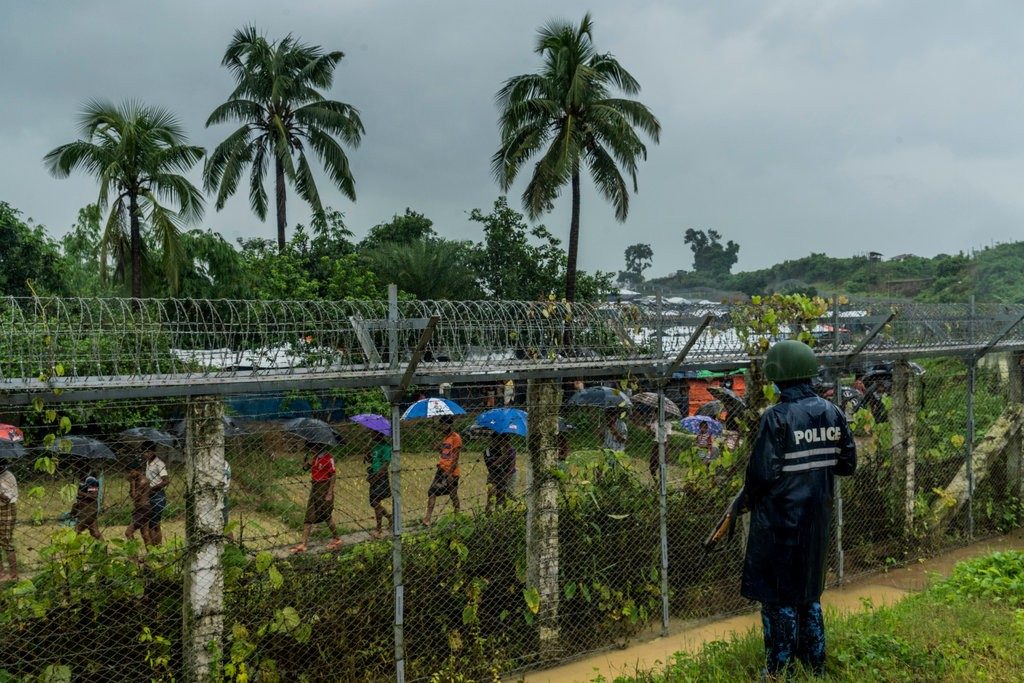 Rohingya Muslims behind barbed wire near Myanmar’s border with Bangladesh. The International Criminal Court ruled this month that it has jurisdiction to investigate Myanmar’s expulsion of Rohingya as a crime against humanity.
Adam Dean for The New York Times

“Before the N.L.D. government, the international community felt pity for our country because we lived under the military regime,” said Daw Nyo Nyo Thin, a democracy advocate and former regional lawmaker, referring to Ms. Aung San Suu Kyi’s National League for Democracy party. “But now, the world sees our country as the majority killing the minority.”

Ms. Aung San Suu Kyi, 73, who spent 15 years under house arrest during military rule, emerged from isolation as a hero, across Myanmar and abroad. Her party swept elections in 2015 and took office the following year. It now controls both the Parliament and the presidency.

But she is hamstrung by a military-drafted Constitution that divides power between the generals and her quasi-civilian government. It also bars her from the presidency, though she found a workaround by choosing U Win Myint, a longtime ally, to serve as president and report to her.

She gave herself the title of state counselor, and also named herself foreign minister. In those roles, she has become known for stubbornness and an imperious style.

The Constitution gives autonomy to the army’s commander in chief, Senior Gen. Min Aung Hlaing. He appoints three cabinet ministers, who oversee the country’s security forces, and a quarter of Parliament’s members, enough to block any constitutional amendment.

Some former supporters worry about Ms. Aung San Suu Kyi’s closeness to the military, known as the Tatmadaw. During a recent appearance in Singapore, she said her relations with the military were not bad. The three generals in the cabinet, she volunteered, were “rather sweet.”

“Suu Kyi has covered for the military, and thereby condemned the whole country to vilification, all due to her stubborn certainty that she has all the answers, when it’s clear she has few answers or ideas, and almost no empathy,” said David Mathieson, an independent political analyst based in Yangon, Myanmar’s largest city.

Her dwindling number of defenders have argued that the military’s outsize power has left her with few options. But with her control of Parliament and the presidency, Ms. Aung San Suu Kyi could enact legislation on a wide array of social issues that lie outside the Tatmadaw’s jurisdiction.

“They can enact any law they want,” said Ms. Nyo Nyo Thin, the democracy advocate. “Our N.L.D. Parliament can abolish old laws and enact new laws. But in only a few cases have they taken action.” 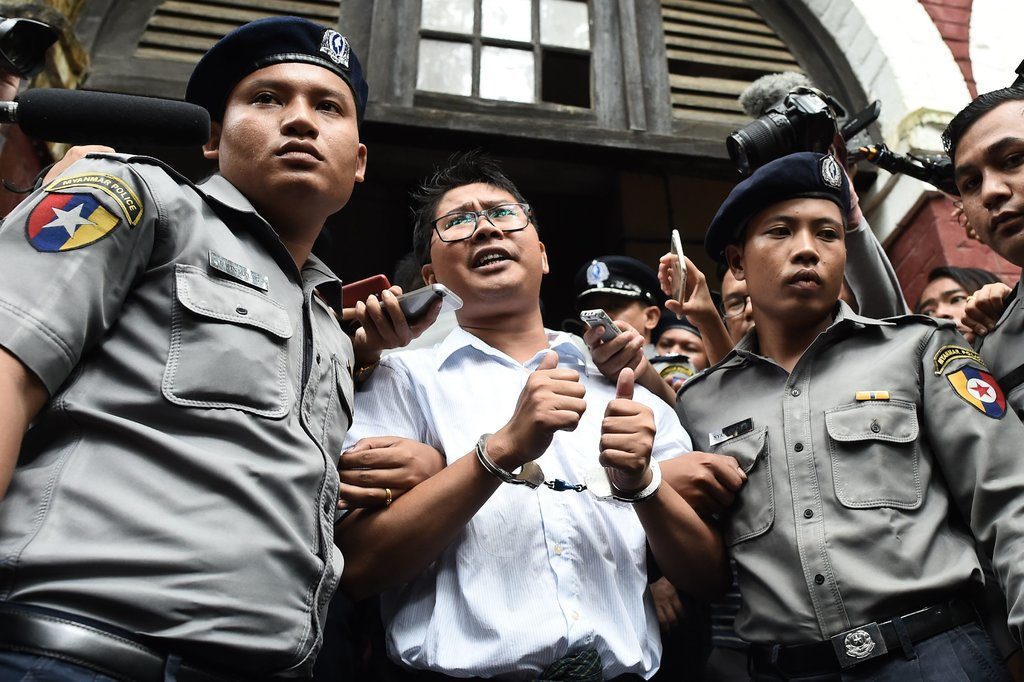 U Wa Lone, a journalist for Reuters, after being sentenced to seven years in prison this month. A Reuters colleague, U Kyaw Soe Oo, was sentenced to the same term. Ye Aung Thu/Agence France-Presse — Getty Images

One missed opportunity, Ms. Nyo Nyo Thin said, has been the failure to abolish hundreds of repressive laws left over from the days of military dictatorship or even British colonial rule — like the Official Secrets Act, which was used to prosecute the two Reuters journalists.

Advocates also say Ms. Aung San Suu Kyi has done little to create opportunities for women, who are largely relegated to a secondary role in the conservative country.

There is only one woman in the cabinet, for example — Ms. Aung San Suu Kyi herself. Women make up just 14 percent of her party’s members of Parliament. The parliamentary committee that handles women’s affairs is headed by a man.

“I’m not sure she believes in gender equality,” said Daw Htar Htar, founder of Akhaya Women, a women’s rights group.

Her critics say that there is much more she could do, even with her limited powers, to promote democracy and protect freedom of expression.

The prosecution of Mr. Ngar Min Swe, for example, proceeded only after the president gave his approval, the judge, U Aung Myint, said in rendering his verdict.

It was also her civilian government that prosecuted the Reuters journalists. They were convicted of illegally possessing official secrets, despite a police officer’s testimony that they had been entrapped and that the documents had already been made public.

Ms. Aung San Suu Kyi could have ordered the charges dropped, as she did for student protesters during her euphoric first days in office. But even before the reporters’ trial was over, she declared publicly that they were guilty. In private, she called them “traitors.”

Now she is under intense pressure to pardon them. The United States, Britain, the United Nations, Amnesty International, Human Rights Watch and 83 civil society groups in Myanmar are among those urging her to do so.

“That she has yet to release Wa Lone and Kyaw Soe Oo adds to the growing evidence of her having strong authoritarian tendencies and little interest in media freedom and freedom of expression,” said Mark Farmaner, director of the London-based Burma Campaign UK. 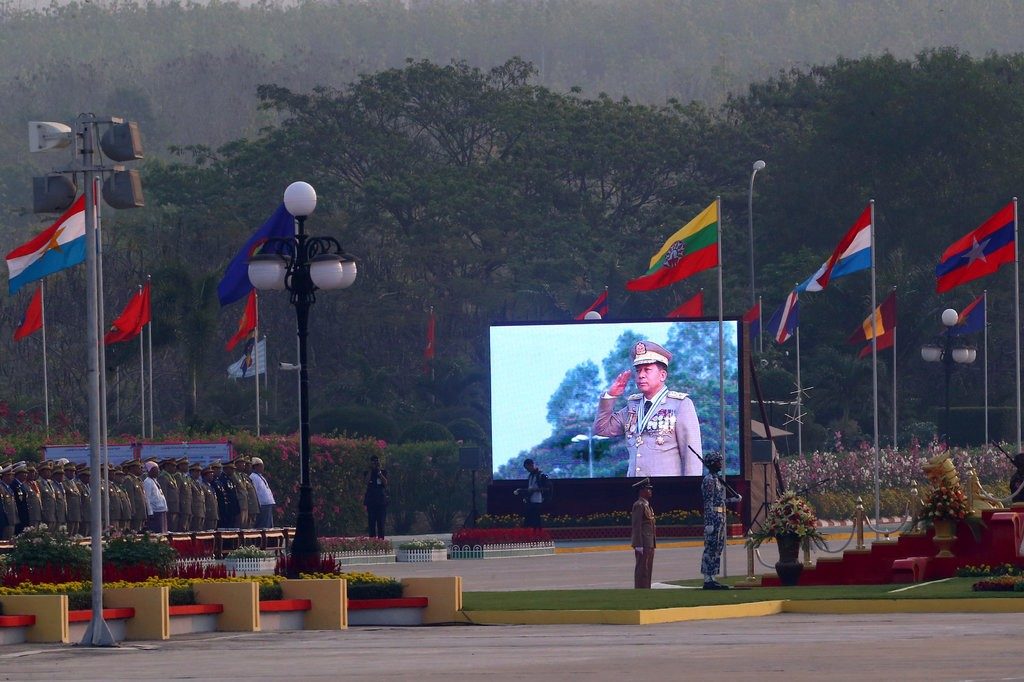 A United Nations mission has called for the head of Myanmar’s military, Senior Gen. Min Aung Hlaing, to be tried for genocide along with other commanders.
Aung Shine Oo/Associated Press

At a forum in Vietnam this month, Ms. Aung San Suu Kyi said the reporters had been sentenced for breaking the law, not for journalism. “If anybody feels there has been a miscarriage of justice, I would like them to point it out,” she said.

When they were arrested, the journalists were reporting on a massacre of 10 Rohingya Muslims, whose mass grave they discovered. The victims were just a few of the countless Rohingya killed in the western state of Rakhine in the Tatmadaw’s campaign of violence, meant to drive them across the border into Bangladesh.

The Rohingya have long been denied even basic rights in Myanmar, a majority Buddhist country where most people regard them as illegal immigrants from Bangladesh, though many have been in the country for generations.

In its report last month calling for General Min Aung Hlaing and other commanders to be tried for genocide, a United Nations mission singled out Ms. Aung San Suu Kyi for not using her position as the de facto head of government, or her moral authority in Myanmar, to try to stop the atrocities.

Instead, the report said, officials in her government spread false narratives, denied the military had done anything wrong, oversaw the destruction of evidence and blocked independent investigations, including that of the United Nations mission itself.

“Through their acts and omissions, the civilian authorities have contributed to the commission of atrocity crimes,” concluded the 444-page report, which was presented to the United Nations Human Rights Council in Geneva on Sept. 18.

Also this month, the International Criminal Court said it had the authority to investigate the expulsion of the Rohingya as a crime against humanity. President Win Myint said Myanmar was not obligated to respect the ruling, since it had not signed the treaty establishing the court. But Bangladesh did sign it, and the court said the crimes had continued into that country, giving it jurisdiction.

The well-publicized atrocities also seem to have hurt Myanmar’s struggling efforts to lure direct foreign investment, which an official said last week had fallen in 2016 and 2017 because of the Rohingya issue.

Some officials and analysts fear that Myanmar is heading toward the kind of isolation it experienced during the decades of outright military rule.

“The pressure on this government is much worse than it was on the military government,” said U Win Htein, a former adviser to Ms. Aung San Suu Kyi. He said Myanmar, so recently embraced by the West as it emerged from dictatorship, was now relying on China and Russia to shield it from potential sanctions at the United Nations Security Council.

Richard C. Paddock reports on Southeast Asia as a contributor to The New York Times, based in Bangkok, Thailand. He has worked as a foreign correspondent for more than a dozen years and reported from nearly 50 countries on five continents, including wartime Bosnia and Iraq.

A version of this article appears in print on Sept. 30, 2018, on Page A10 of the New York edition with the headline: From Hero to Pariah, Civilian Leader Dashes Hopes for a Free Myanmar.