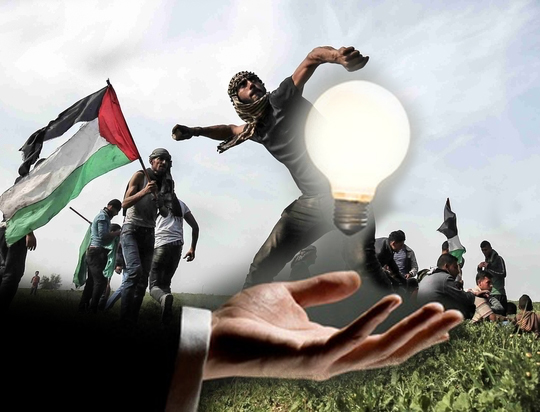 14 Oct 2018 – Insight refers to the sudden ability to see something in a way that profoundly clarifies our understanding. It allows us to revise our views from a totally new perspective. Insightfulness is an innovative mode. It offers an alternative, out of the box, vision of the world around us. Insightfulness is a key factor in any dynamic and vibrant discourse.

While the so-called revolution is occasionally fueled by ideological or social ‘insight,’ the ‘revolutionaries’ are more often anti insightful by nature.  They spend their energy reducing an ‘insight’ into a fixed regime: a doctrine, a dogma, a strategy, a pile of commandments, a kosher jargon or a list of ‘deplorables.’ While Marx, for instance, offered an insightful materialist vision of our past as well as our human future, Marxists are generally an anti-insightful bunch. Their doctrine reduces Marx’s insights into Torah and Mizvoth, restricting and suppressing creative thinking. So-called ‘revolutionaries’ are too often a collective of  ‘counter-revolutionaries;’ people who do little but kill insightfulness. They identify symbolically with the ‘revolution,’ while they sustain a reality of stagnation. This analysis may assist us in understanding the last 150 years of Left paralysis in the West. It may also explain why it is often fascists who take over precisely when conditions are ripe for a ‘text book’ Marxist revolution.

Observing the evolution of the Palestinian solidarity movement and the growing influence of Jewish bodies within this movement has provided me with the opportunity to monitor a spectacular anti-insightful operation.

For many years I have wondered why the Palestinian solidarity discourse is uniquely anti-intellectual. It basically jettisons critical thinking and acts instead from a rigid activism manual. Instead of advancing our understanding of the essence and the nature of what is responsible for the oppression of the Palestinian people, namely The Jewish State, the movement clings to models that drive us as far as possible from the conflict or a working understanding of its roots. Instead of asking how the Israelis interpret the meaning of their state as the ‘Jewish state’ or trying to understand how the Jewishness of that ‘Jewish state’ influences Israeli politics or its supportive lobby around the world, we cling to moldy 19th century theoretical models (e.g., colonialism) that apply to super power conduct in an industrial era. Instead of comparing the Jewish State to other political models that adhered to expansionism, nationalism, race and ethnic cleansing (Nazi Germany, for instance), we equate Israel with apartheid South Africa.

In truth, Israel is far more vile than apartheid South Africa. Apartheid is a racist system of exploitation, the Jewish state doesn’t want to ‘exploit’ the Palestinians, it wants them gone. Israel is a racially driven, expansionist ethnic cleanser but we are not allowed to study the true nature of its philosophy.

I should feel a bit sorry to point out that the Palestinian solidarity movement is not just ideologically and politically misleading, it is actually misleading by design.

In 2010 I asked Olivia Zemor,  an enthusiastic French Jewish pro Palestinian BDS activist, why she disseminates populist slogans that work to stifle her followers’ ability to understand the roots of the conflict and its possible resolution. Zemor’s answer was shockingly simple: “we have a lot of people who support Palestine, we better keep them busy with simple tasks.”  Perhaps the Palestinian solidarity movement is an intense engagement, but, as we know, it has yet to facilitate the return of a single Palestinian refugee to Jaffa, Lod, Haifa or anywhere else in that unpromising land.  In fact, it is doing the opposite. It keeps people busy with ‘simple tasks’ that divert their attention from the root cause of the conflict. Instead of looking at the exceptionalist and racist orientation that is intrinsic to pretty much every Jewish political discourse, we equate a post modernist  21st century entity  with the modernist politics of the 19th century British empire.  Instead of unconditionally supporting the Right of Return, the movement is basically an endless internal Jewish debate about Jews’ right to BDS.

In the 1990s the Palestinian solidarity movement  engaged in a vibrant innovative discourse that was the basis of an evolutionary mechanism where the most profound thoughts prevailed.  But this changed in the early 2000s when a crude and relentless effort emerged aimed at eradicating any attempt at deep, essentialist, innovative thinking. Insightfulness was replaced by a rigid regime of correctness. The solidarity movement rapidly became an intellectual desert.

Throughout this time the so-called ‘Jews in the movement’ (JIM) viciously and ferociously attacked the greatest  minds and most enthusiastic activists who expressed support for Palestine (People like Israel Shamir, Greta Berlin, Richard Falk, Norman Finkelstein, Paul Eisen and Alison Weir).  None of these attacks led to discussion or debate within solidarity institutions, for these institutions have been reduced into authoritarian kangaroo courts.  The attacks were often followed by Talmudic Herem procedures – calls for disavowals and excommunication.

Back in the day, Paul Eisen taught me the iron rule of Jewish politics. “Self identified political Jews,” he said, “always kick to the left.” As long as they do so, they sustain their membership in the fold. Often we learn that a West Bank messianic settler has kicked to Netanyahu’s left. Netanyahu, on his part, kicks the Israeli political centre. The Israel’s Labour Party does the same to the Israeli Left that itself often harshly criticizes Jewish diaspora ‘anti’ Zionist groups. Unfortunately, this dynamic doesn’t stop at the Israeli border. Diaspora self-identified progressive ‘anti’ Zionist Jews follow the same procedure. They smear, denounce and purge those whom they are desperate to silence.

The pattern is clear, to be a (political) Jew is to define the boundaries of kosher conduct. Jews do not agree amongst themselves on what constitutes kosher political conduct, but they do agree on the necessity of boundaries. To be a Jew is to insist that someone else is ‘beyond the pale.’

This  dynamic  manifests itself daily within the Jewish pro  Palestinian movement. The British Jewish group that calls itself “Free Speech on Israel” doesn’t actually support true freedom of speech. It just insists upon redefining the boundaries of such ‘freedom.’ JVP and Mondoweiss often tell us what and who we shouldn’t listen to. When my book The Wandering Who was published in 2012 it rapidly gained popularity amongst Palestinian supporters. Mondoweiss were very quick to react. They changed their comment policy . “From here on out, the Mondoweiss comment section will no longer serve as a forum to pillory Jewish culture and religion as the driving factors in Israeli and US policy.” The Jewish ‘anti’ Zionist site practically banned its followers from talking about the Jewishness of a state that calls itself ‘The Jewish State.’

The same applies to Richard Silverstein and others who are often denounced by Zionists and even anti Zionists  yet still insist upon defining what is right and who is wrong for Palestine.

In light of this Jewish kick boxing apparatus, Goyim are easy to describe. Goyim do not kick to the left nor do they kick to the right.  The most dedicated American journalist on Palestine,  Alison Weir, has never told us what the boundaries of the political discussion are. The Washington Report on  Middle East Affairs has not told us whom we should ignore or disavow. Stephen Mearsheimer also failed to tell us who to delete. And these Goyim are not alone. I have never seen Richard Falk’s repudiation list. Norman Finkelstein is not a fan of my work, but he does not interfere with my or anyone else’s work. The same applies to Chomsky.  Paul Eisen and Israel Shamir who suffered more than most the vile and brutal smear campaigns, have never participated in the Jewish left kicking.

Shamir, Eisen, Finkelstein, Chomsky and Falk may disagree on many things but they share a crucial quality.  Like Uri Avnery R.I.P. and Gideon Levy they do not present a template of kosher boundaries. It is not surprising that these people are amongst the most insightful. They operate as intellectuals. They do not operate politically as Jews. They offer their take on reality and refrain from defining what issues we shouldn’t tackle. They let others be.

In my latest book, Being in Time, I reinstate the discussion about ‘Athens and Jerusalem.’ Athens, as I define it, is the birth place of philosophy, science and beauty. Athens is where ‘we think things through.’ Jerusalem, on the other hand, is the city of revelation, the realm of obedience governed by a strict regime  of correctness. Unfortunately, the Palestinian solidarity movement has been reduced into a ghettoized Jerusalemite sect. But despite this, solidarity with the Palestinians hasn’t died out. It has grown into a universal global awareness. By now, we are all Palestinians, Like the Palestinians we can’t even utter the name of our oppressor.