Bulldozers today entered the outskirts of the village, northeast of occupied Jerusalem for the second consecutive day, leveling ground to prepare for demolition. 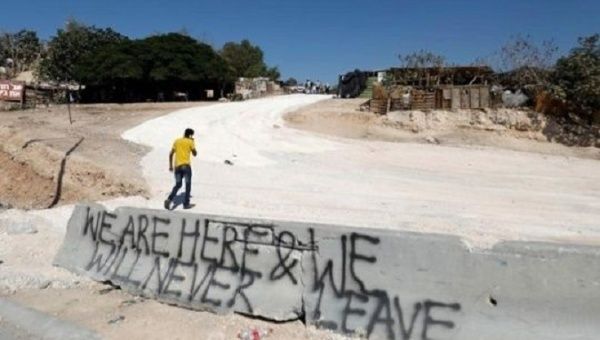 A Palestinian man walks in the Bedouin village of Khan al-Ahmar in the Occupied West Bank Jul. 6, 2018. | Photo: Reuters

The bulldozers entered the outskirts of the village early Tuesday, northeast of occupied Jerusalem for the second consecutive day, leveling ground in preparation for its demolition.

Earlier in September, Israeli forces handed out notices ordering the residents of Khan al-Ahmar to leave their homes by Oct 1 or be forcibly removed.

The Bedouin village in the Occupied West Bank with a mere population of 180 people, is situated a few kilometers from Jerusalem between two major illegal Israeli settlements, namely, Maale Adumim and Kfar Adumim.

The villagers have already been expelled from their lands in the Naqab desert by the Israeli military in the 1950s. Following that, they were internally displaced twice more before settling in Khan al-Ahmar long before illegal settlements around it started. The 1993 Oslo Accords classified the village as Area C which accounts for 60 percent of the West Bank under complete Israeli administrative and security control.

Israel plans to relocate the residents of Khan al-Ahmar to a site 12 kilometers away, near the Palestinian village of Abu Dis and adjacent to a landfill site. This has raised criticism from Palestinians, who warn the proposed location is unsuitable as it poses a health risk.

Residents, activists, and foreign diplomats have protested against the demolition of the village. Initially, the demolition was postponed due to the Jewish holiday of Simchat Torah.

But the residents of Khan al-Ahmar were attacked indirectly when they were flooded by wastewater by Israeli settlers. The last time they were flooded was Monday creating environmental and health hazard for citizens.

Protestors are being detained. At least seven people were injured and four others were detained after resisting Israeli forces arriving in Khan al-Ahmar.