Jair Bolsonaro Is Elected President of Brazil. Read His Extremist, Far-Right Positions in His Own Words. 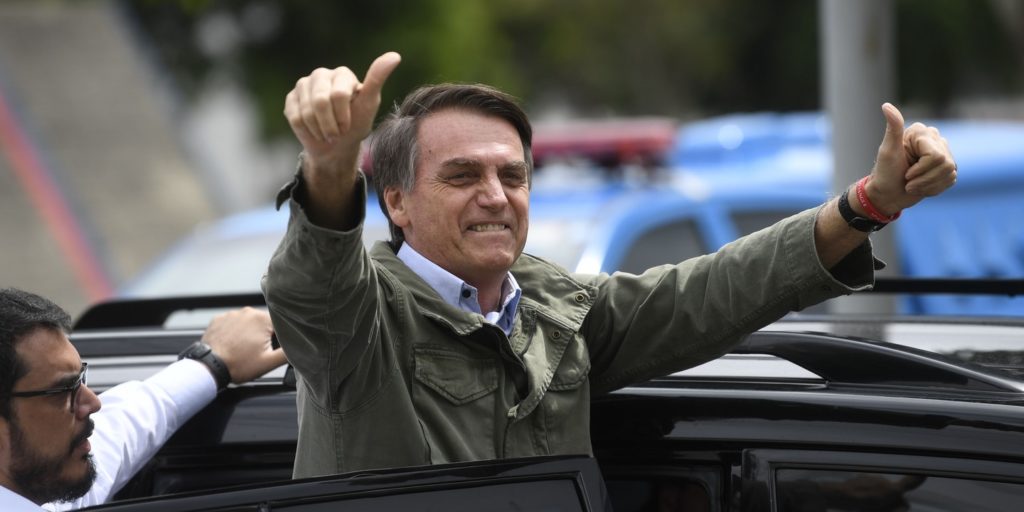 28 Oct 2018 – Jair Bolsonaro was elected president of Brazil today. The far-right candidate received more than 55 percent of valid votes. His opponent, Fernando Haddad of the Workers’ Party, received less than 45 percent. In a country with compulsory voting, almost 29 percent of adults preferred to annul or not cast their ballot.

Bolsonaro, who has taken aim at the media throughout his campaign, chose to make his first statement after the election via Facebook Live, rather than a press conference. “We could not continue to flirt with socialism, communism, populism, and the extremism of the left,” he said. The broadcast was picked up by major TV networks, but repeatedly froze due to connection issues. “All of the promises made to political groups and the people will be kept,” he added.

Soon after, he stepped outside, made a brief statement to the media, and asked a key supporter, senator Magno Malta, to lead the group in prayer. He then read a prepared statement and took questions from a representative of the press.

The Workers’ Party originally ran former president Luiz Inácio Lula da Silva as their candidate, and he was the clear favorite in the polls. However, they were forced to swap him out at the last minute for Haddad, a former mayor of São Paulo who failed to win reelection in 2016, after Lula was sent to prison on a questionable corruption conviction and it became clear that higher courts would not overturn the sentence. Hindered by a late start and the lack of a national profile, Haddad struggled to gain name recognition and failed to distance himself from public perceptions that linked his party to corruption and the status quo. Nonetheless, with the strong base of the Workers’ Party and the message, “Haddad is Lula,” the 55-year-old academic was able to scrape his way through the first round of elections on October 7, taking 29 percent of the vote in a 13-way contest.

This year’s elections were particularly fraught, marked by dramatic polarization, political violence, and massive disinformation campaigns on social media, in a country that has been roiled by years of social, economic, and political crises. Since 2013, millions of people of all political stripes have repeatedly taken to the streets in protest; Brazil has struggled to climb out of the worst recession in history; massive corruption scandals have destabilized political institutions and major economic players; former president Dilma Rousseff (also from the Workers’ Party) was impeached on dubious grounds; her successor, president Michel Temer (the most despised leader in Brazil’s democratic history), has pushed through a series of unpopular austerity measures; and Lula was jailed, a process which has exposed the judiciary to relentless criticism for perceived partisanship. 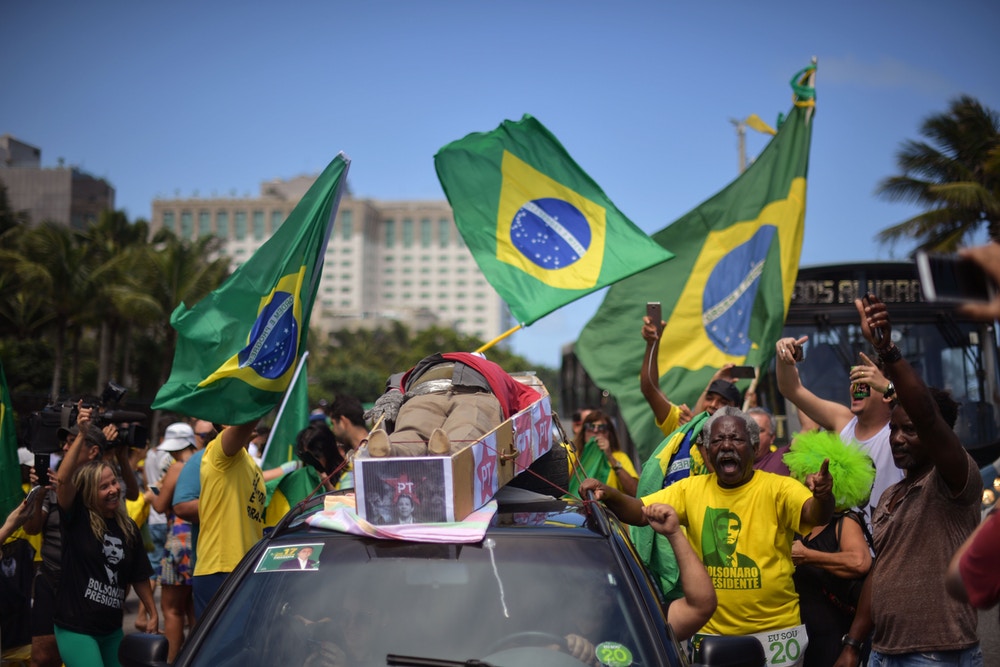 In short, every major political institution has been increasingly discredited as Brazil has spiraled deeper and deeper into a dark void. And from the abyss emerged a former army captain and six-term congressman from Rio de Janeiro, Jair Bolsonaro, with the slogan “Brazil above everything, God above everyone,” and promises to fix everything with hardline tactics.

Seven years ago, Bolsonaro was a punchline for the political humor program CQC, where he’d make outrageous statements. A former presenter, Monica Iozzi, said they interviewed him multiple times “so people could see the very low level of the representatives we were electing.” Now, it’s Bolsonaro who is laughing and Iozzi says she regrets having given him airtime. Riding the wave of public discontent, Bolsonaro campaigned against the Workers’ Party, corruption, politicians, crime, “cultural Marxism,” communists, leftists, secularism, and “privileges” for historically marginalized groups. Instead, he favored “traditional family values,” “patriotism,” nationalism, the military, a Christian nation, guns, increased police violence, and neoliberal economics that he promises will revitalize the economy. Despite his actual political platform being short on specific proposals, the energy around his candidacy was enough to win the presidency and turn his previously insignificant Social Liberal Party into the second-largest bloc in Congress.

But what has frightened his opponents, many international observers, and even some fervent Workers’ Party critics, are Bolsonaro’s repeated declarations in favor of Brazil’s military dictatorship, torture, extrajudicial police killings, and violence against LGBTQs, Afro-Brazilians, women, indigenous peoples, minorities, and political opponents, as well as his opposition to democratic norms and values.

Here is Brazil’s next president in his own words over the years. In the coming months, Brazil and the world will discover if Bolsonaro will make good on these drastic promises when he takes office on January 1, 2019.

“I am in favor of a dictatorship, a regime of exception.”

Interviewer: If you were the President of the Republic today, would you close the National Congress?

“There’s no doubt about it. I’d do a coup on the same day! It [the Congress] doesn’t work! And I’m sure at least 90 percent of the population would throw a party, would applaud, because it does not work. Congress today is good for nothing, brother, it just votes for what the president wants. If he is the person who decides, who rules, who trumps the Congress, then let’s have a coup quickly, go straight to a dictatorship.”

“The pau-de-arara [a torture technique] works. I’m in favor of torture, you know that. And the people are in favor as well.”

“Through the vote you will not change anything in this country, nothing, absolutely nothing! It will only change, unfortunately, when, one day, we start a civil war here and do the work that the military regime did not do. Killing some 30,000, starting with FHC [then-president Fernando Henrique Cardoso], not kicking them out, killing! If some innocent people are going to die, fine, in any war innocents die.”

“I will not fight nor discriminate, but if I see two men kissing in the street, I’ll hit them.”

“I’m a rapist now. I would never rape you, because you do not deserve it… slut!” 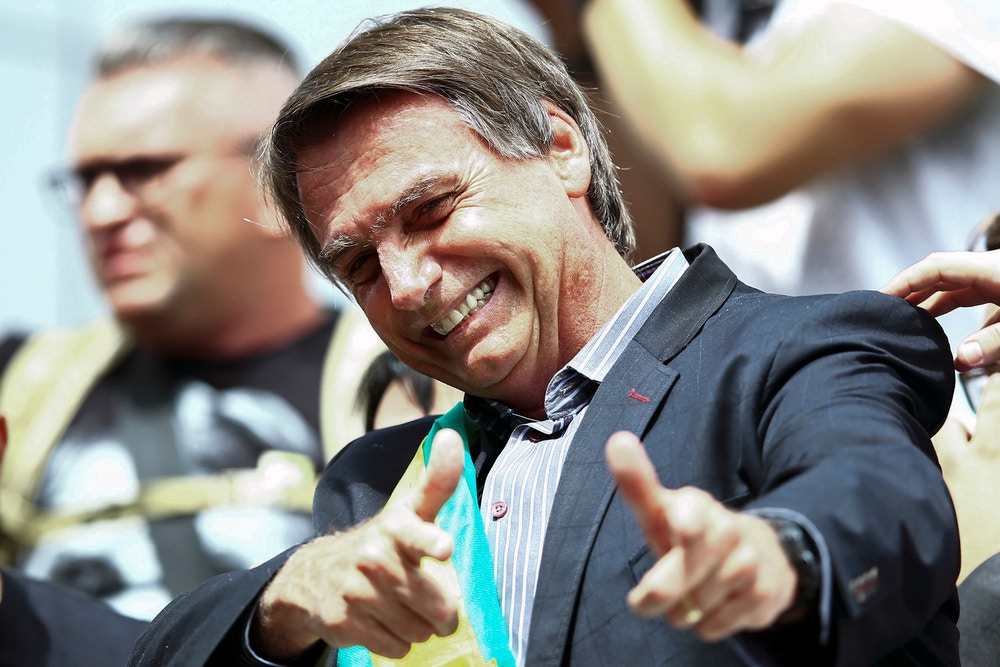 “I would be incapable of loving a homosexual child. I’m not going to act like a hypocrite here: I’d rather have my son die in an accident than show up with some mustachioed guy. For me, he would have died.
…
“If your son starts acting a little gay, hit him with some leather, and he’ll change his behavior.”

Preta Gil, actress and singer: If your son fell in love with a black woman, what would you do?

“Oh, Preta, I’m not going to discuss promiscuity with whoever it is. I do not run this risk and my children were very well raised and did not live in the type of environment that, unfortunately, you do.”

“If a homosexual couple comes to live next to me it will devalue my home! If they walk around holding hands and kissing, that devalues it.”

Interviewer: Are you proud of the story of Hitler’s life?

“No. What you have to understand is the following: war is war. He was a great strategist.”

Interviewer: Have you ever hit a woman before?

“Yes. I was a boy in Eldorado, a girl was getting in my face…”

Interviewer: Put her against the wall, a few taps? Pah!

“No, well, no… [laughs] I’m married. My wife isn’t going to like this response.”

“[Homosexuals] will not find peace. And I have [congressional] immunity to say that I’m homophobic, yes, and very proud of it if it is to defend children in schools.” 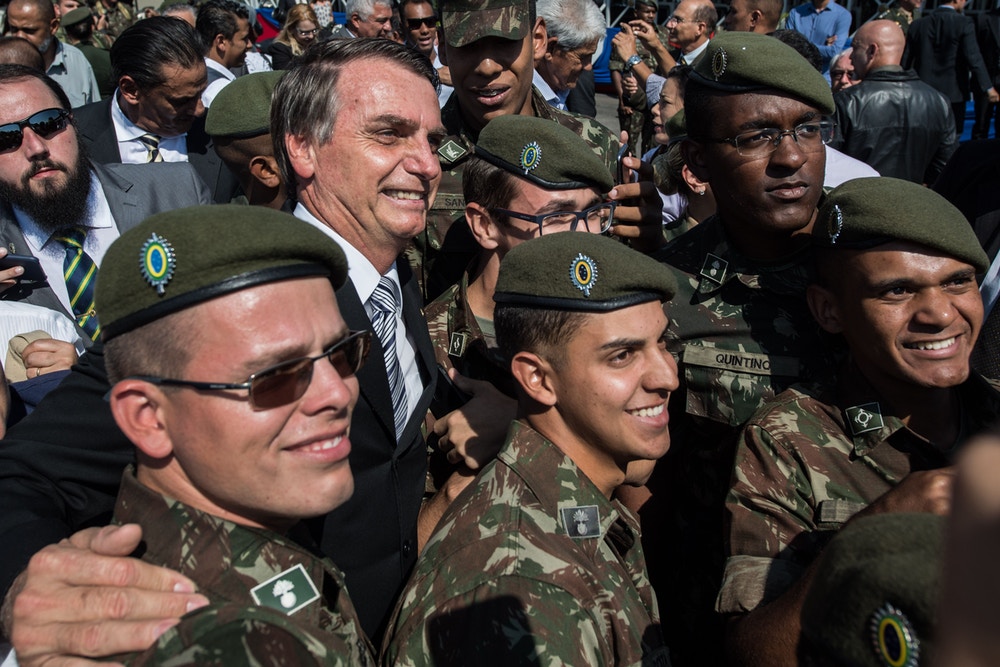 Bolsonaro takes pictures with soldiers during a military event in Sao Paulo, Brazil on May 3, 2018. Photo: Nelson Almeida/AFP/Getty Images

“I would not employ [a woman] with the same salary [of a man]. But there are many women who are competent.”

“Violence is combated with violence.”

“I went with my three sons. Oh the other one went too, there were four. I have a fifth also. I had four men and on the fifth I had a moment of weakness and a woman came out.”

“If I [become president], there won’t be any money for NGOs. These worthless [people] will have to work. If I get there, as far as I’m concerned, every citizen will have a firearm in their home. You will not have a centimeter demarcated for indigenous reserves or quilombolas [settlements of the descendants of escaped and freed slaves that have protected status.]”

“Has anyone ever seen a Japanese begging for charity? Because it’s a race that has shame. It’s not like this race that’s down there, or like a minority ruminating here on the side.”

“The big problem in Brazil is that the government is at the jugular of businessmen. […] The worker will have to decide: less rights and employment or all the rights and unemployment.”

“I’ll give carte blanche for the police to kill.”

“Since I was single at the time, I used the money from my [congressional] housing stipend to get laid.”

“This group, if they want to stay here, will have to put itself under the law of all of us. Leave or go to jail. These red marginals will be banished from our homeland.”

“You will not have any more NGOs to quench your leftist hunger. It will be a cleansing never before seen in the history of Brazil.”

“You will see a proud Armed Forces which will be collaborating with the future of Brazil. You, petralhada [a derogatory term for Workers’ Party supporters] will see a civilian and military police with a judicial rearguard to enforce the law on your backs.”

Update, October 28, 2018: This post has been updated with details about the election results and Bolsonaro’s first statement as president-elect.

Update, October 28, 2018: This post has been updated with final election results.