20 Sep 2018 – The figures on conflict are truly depressing. More countries are experiencing violent conflict now than at any time in the past 30 years. More people are displaced from their homes now than any time after the Second World War, with the cost of conflict estimated at a whopping US$1.04 trillion a year.

Against this disturbing background, it is all the more important to understand what the people behind the numbers actually experience, how they respond to violent conflict, and how they think their governments should respond.

International Alert and the British Council, in partnership with global polling agency RIWI, set out to find some answers to these questions. Our inaugural Peace Perceptions Poll was conducted in 15 countries, from more peaceful states to those at risk of conflict, and those where there is active armed conflict.

And our results showed that people fundamentally understood what it takes to get to peace.

When we asked people about the most effective approach to creating long-term peace, most said it was through ‘dealing with the reasons why people fight in the first place’ (29%), followed by ‘supporting societies and communities to resolve conflict peacefully’ (22%). These options were way ahead of military interventions, chosen by only 9% of people.

Asked where their governments should spend more to promote peace, people gave top ranking to ‘dealing with the reasons why people fight in the first place’. This was strongly followed by ‘teaching peace, tolerance and conflict resolution in schools’. Again, military interventions had the least support. 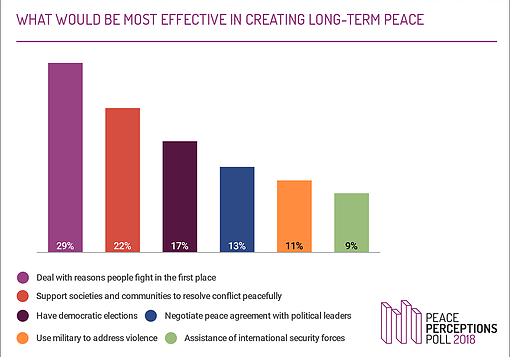 Our findings, we hope, will provide crucial insight for global leaders and policy-makers aspiring to deal with the root causes of conflict. The public have crisis fatigue and they do support governments addressing the long-term root causes of violence. What’s more they have a keen sense of where those roots lie.

Across the world, ‘lack of jobs and ability to provide for one’s family’ was seen as the main reason that would push people to violent action. This was followed by a ‘sense of injustice’ and a ‘need to improve one’s social status’. By contrast, political and economic inclusion were overwhelmingly regarded as fundamental to peace and security.

Our poll also found that we have more in common than we think, especially on what we think constitutes a peaceful society. People said societies are peaceful when: they can resolve disputes without violence, they have the opportunity to earn a living to support their family, there is less crime, they can vote in a national election, there is less violence. That’s probably not a bad read-over to the peace factors routinely used by many peacebuilding organisations.

Among the complexity of views, what shines through is evidence that people have an innate understanding of, and support for, peacebuilding approaches. Yet peacebuilding has been a relatively underused tool compared to other responses to conflict, such as military intervention and humanitarian aid, both of which are used responsively rather than preventatively.

Peacebuilding is popular, our poll shows. This presents global leaders with an opportunity achieve sustainable security outcomes, while doing the popular thing. What more could they want?

The Peace Perceptions Report 2018 is available to download here. 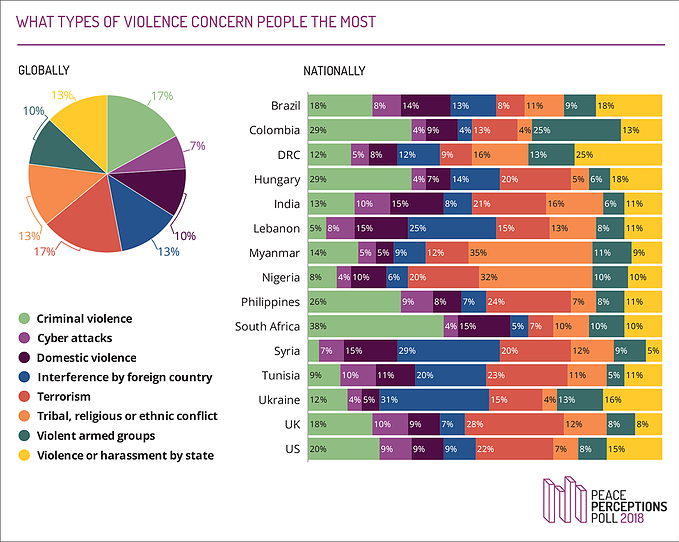 International news today is driven by sensationalism. From conflict zones, we hear stories about killings, bombings, and the views of violent extremists. This type of coverage tends to inflame passions and perpetuate negative stereotypes, fueling distrust and violence. Peace News aims to present the other side – stories from conflict zones we often don’t hear. Our stories are about people taking risks for peace. We highlight the opinions of ordinary people who want non-violent solutions to their political differences. Our stories aren’t always about shootings and explosions, but they do tell you stories from war zones that hopefully go some way towards building trust and reconciliation. Founded by Dr Babak Bahador, and launched in 2015, Peace News is a non-partisan, independent, news agency. We are based in New Zealand and Washington D.C., USA, and Kate Roff is the founding, and current, editor.

Harriet Lamb is the CEO of International Alert, where she leads work across 20 countries.