Many rugby players are overweight, as defined by their BMI. Roger Sedres/Shutterstock.com

11 Oct 2018 – For over a century, we have relied on a simplistic measure to determine if someone is a “healthy” weight or not. This is the body mass index (BMI) – the ratio of a person’s weight to the square of their height. The limits of this ratio are clearly demonstrated by professional rugby players; most of whom would be classified as “overweight”, despite having less than 10% body fat.

Studies have also shown that not all obese people develop health problems, such as diabetes and heart disease. This “fat but fit” cohort seem to be protected somehow. On the flip side, people with a “normal” BMI are not immune from getting diabetes or heart disease.

Most preventive medicine and health advice is based on BMI cutoffs. But these cutoffs can be falsely reassuring, especially for those who are TOFI (Thin on the Outside, Fat on the Inside) – people who have large amounts of fat around their organs. Finding out who, in the general population, is TOFI and who isn’t would be prohibitively expensive, though, as it requires an MRI scan. 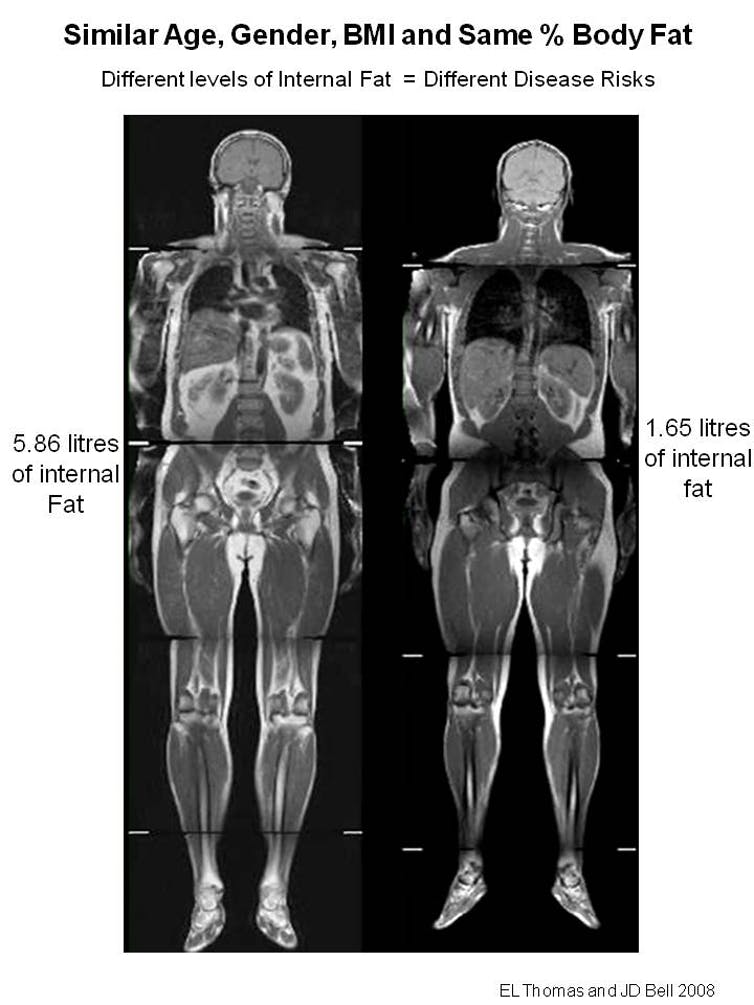 MRI of a TOFI and a normal control.
ImagingFat/Wikimedia Commons, CC BY-SA

A better predictor of future health can be gleaned from a drop of blood. Our latest research, published in Cell Metabolism, shows that measuring metabolites (substances involved in metabolism) in a blood sample can predict a person’s risk of becoming obese (and unhealthy) with an accuracy of 80-90%. They can also predict health outcomes, including heart disease, diabetes, kidney problems, visceral fat and biological age.

For our study, we analysed data from nearly 2,000 middle-aged British twins from our TwinsUK cohort. These twins have been followed for an average of 13 years with blood tests, weight and height measures, and gene sequencing. We replicated our findings in 427 Americans undergoing health screening.

Although many studies have shown the importance of genes in influencing obesity, and over a hundred specific genes have been found, they explain less than 2% of why people differ in BMI, so are useless for individual prediction of future obesity. We looked at around 1,000 blood metabolites, measured from a drop of blood plasma, and found a third were associated with increases in weight and obesity. Of these, 49 metabolites were also strongly associated with increases in weight and obesity in the American group, showing their reliability as indicators. We used these 49 metabolites for our main analysis. 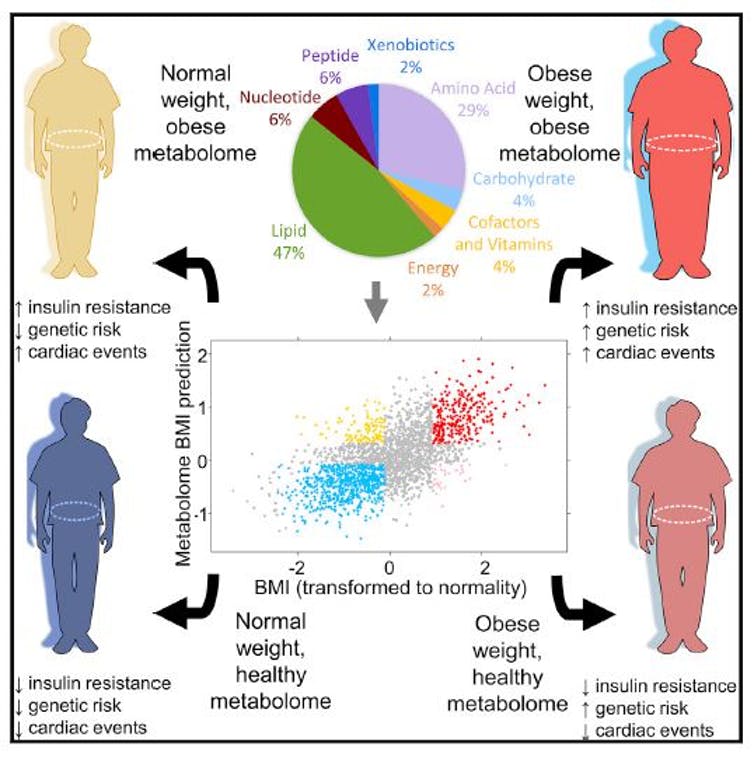 Those with a normal BMI, but an unhealthy metabolite mBMI profile, had a 50% greater chance of becoming obese over the next ten years and had a 200-400% increased risk of heart disease. It also predicted an increased risk of many other common medical conditions, such as high blood pressure, abnormal lipids, insulin resistance and increased fat around the abdomen.

These metabolites were not associated with the many obesity genes, suggesting that the genes detected so far are just picking up an increase in body size, not abnormal metabolism.

We all have thousands of metabolites in our blood and, as well as being biomarkers of disease and future risk, they may play a key role in triggering disease. There is big individual variability in metabolites between people, both in the blood and also our guts. At least a third of our metabolites in blood are produced or strongly influenced by our gut microbes, which are themselves influenced by diet and weight. So weight or BMI as a simple measure of health is flawed, and dealing with it purely by reducing energy intake is misguided.

Quality, not just quantity, of diet is important to reduce future risk of obesity and its health consequences. We need to pay less attention to old-fashioned calories and scales and more to our body’s metabolism, and the diets and microbes that produce these healthy chemicals. This study shows it can be done.