The Analects of Confucius 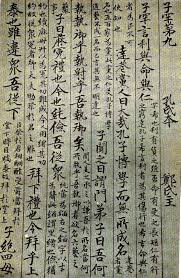 The Analects of Confucius is an anthology of brief passages that present the words of Confucius and his disciples, describe Confucius as a man, and recount some of the events of his life. The book may have begun as a collection by Confucius’s immediate disciples soon after their Master’s death in 479 BCE. In traditional China, it was believed that its contents were quickly assembled at that time, and that it was an accurate record; the English title, which means “brief sayings of Confucius,” reflects this idea of the text. (The Chinese title, Lunyu 論語, means “collated conversations.”) Modern scholars generally see the text as having been brought together over the course of two to three centuries, and believe little if any of it can be viewed as a reliable record of Confucius’s own words, or even of his individual views. Rather, much like the biblical Gospels, to which the text bears some resemblance, the Analects offers an evolving record of the image of Confucius and his ideas through from the changing standpoints of various branches of the school of thought he founded.

This online translation is posted to make it easier to locate an English rendering of this important text with some basic commentary. It has been prepared for use in under-graduate teaching and is not meant to replace published scholarly editions. The interpretations reflected are my own, and in some cases do not represent consensus readings (if such exist – there are, and always have been, competing interpretations of many of the most engaging passages in the text, starting from passage 1.1).

In this very brief introduction to the text, I will summarize a few features of Confucius’s life and social environment, review some basic ways in which the component parts of the Analects are dated by analysts, on a very general level, and note some particular issues concerning key terms and translation, and of personal names. 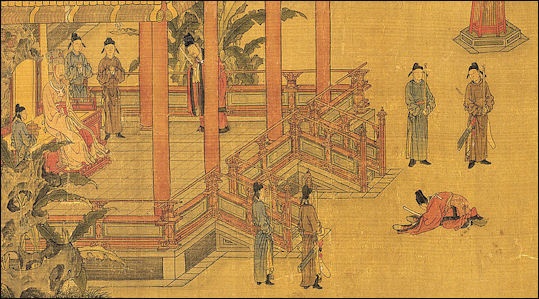 Scene from the Classic of Filial Piety

“Confucius” is the name by which English speakers know Kong Qiu 孔丘, born near a small ducal state on the Shandong Peninsula in 551 BCE. Centuries earlier, a strong royal state, known as the Zhou (founded in 1045 BCE), had sent members of its high aristocracy to rule regions of its empire as hereditary lords, subjects of the Zhou king, but, so long as they remained loyal, masters of their local domains. In 771 BCE, raids by non-Zhou nomadic peoples led to the death of the Zhou king and the removal of the Zhou capital; from that time on, the Zhou kings had become weak, and the feudal lords had become de facto sovereigns over essentially independent states and statelets. Three themes of Confucius’ day were incessant warfare, which had been pervasive among the feudal lords since the devolution of power into their hands, the further devolution of power from the Zhou-appointed feudal houses into the hands of subordinate families that managed to ac-cumulate power locally, and the rising fluidity of social mobility which this type of open competition for power encouraged, as intelligence and warrior skills in their assistants proved more valuable to competing power-holders than did hereditary pedigree.

Confucius’s father was a member of the low aristocracy of the medium sized state of Lu 魯. According to our best sources, he was an important aide to a major aristocratic, or “grandee” family. During his prime, this family had served the greatest power holders in Lu by controlling a domain assigned to them on Lu’s southern border, near a small, non-Zhou cultural area called Zou 鄹. Shortly before Confucius’s birth, the family’s do-main was relocated to the north, but Confucius’s father, having by his primary wife and his concubines produced no healthy sons to carry on his line, and being now an older man, chose at this time to take as a concubine a woman of Zou. She soon gave birth to Confucius. Three years later, Confucius’s father died, and Confucius apparently grew up with his mother’s family in the border region between Lu and Zou. Reaching adulthood, he traveled to the feudal center of Lu to seek social position, based on his father’s standing and connections.

The state of Lu took pride in the fact that the lineage of its rightful lords, the dukes of Lu, had begun with a famous brother of the Zhou dynastic founder, a man known as the Duke of Zhou. Treasuring Zhou traditions with which he was associated, after the decline of the Zhou royal house the state of Lu had become known as the purest repository of Zhou aristocratic culture. But during the sixth century, these traditions were undermined, as powerful warlord families gained increasing control of government and resources in Lu, gradually marginalizing the legitimate ducal house, and distorting the norms of government form and ceremonial ritual that had made Lu distinct.

When Confucius sought his fortune in Lu, he probably appeared there as a semi-outsider, the son of a “mixed” union between a man of Lu, who had long resided in Zou, and a woman of that non-Zhou place (see passage 3.15). But Confucius made his reputation as a strong advocate of a puristic revival of Zhou traditions in court conduct, religious ceremony, and every aspect of ordinary life. He became expert in these traditions, and it was on the basis of this knowledge and the persuasiveness of his claim that the way to bring order back to “the world” was to recreate early Zhou society through its ritual forms, or “li,” that Confucius became known. The details of what Confucius saw as legitimate Zhou culture and why he thought its patterns were tools for building a new utopia are the principal subjects of the Analects.

His mastery of Zhou cultural forms allowed Confucius to become a teacher of young aristocrats seeking polish, and through their connections, he was able to gain some stature in Lu. Ultimately, he and some of his followers attempted to implement a grand restorationist plan in Lu that would have shifted power back to the ducal house. Shortly after 500 BCE, when Confucius was about fifty, the plan failed, and Confucius was forced to leave his home state. For about fifteen years, he traveled with a retinue of disciples from state to state in eastern China, looking for a ruler who would employ him and adopt the policies he advocated. The Analects pictures some key moments in these travels, which ultimately proved fruitless. A few years before his death, one of Confucius’s senior disciples, a man named Ran Qiu, arranged to have Confucius welcomed back to Lu, where he lived out his days as a teacher of young men, training them in the literary, ritual, and musical arts that he saw as central to the culture of the Zhou.

Open access to this translation is provided, without charge, at http://www.indiana.edu/~p374/Analects_of_Confucius_(Eno-2015).pdf

Also available as open access translations of the Four Books:

The Great Learning and The Doctrine of the Mean: An Online Teaching Translation http://www.indiana.edu/~p374/Daxue-Zhongyong.pdf

The Great Learning and The Doctrine of the Mean: Translation, Notes, and Commentary http://www.indiana.edu/~p374/Daxue-Zhongyong_(Eno-2016).pdf 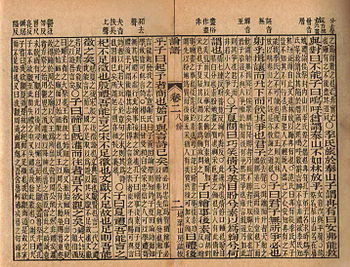 This online translation is made freely available for use in not for profit educational settings and for personal use. For other purposes, apart from fair use, copyright is not waived. © 2003, 2012, 2015 Robert Eno

Download full text in PDF: The Analects of Confucius

Anticopyright: Editorials and articles originated on TMS may be freely reprinted, disseminated, translated and used as background material, provided an acknowledgement and link to the source, TMS: The Analects of Confucius, is included. Thank you.