UN Security Council to Hear on Oct. 24 from UN Fact-Finding Mission on Rohingya 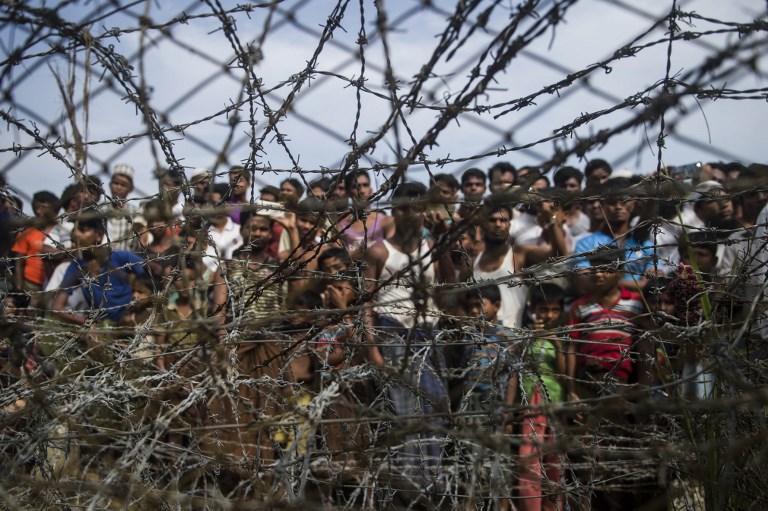 This picture taken from Maungdaw district, Myanmar’s Rakhine state on April 25, 2018 shows Rohingya refugees gathering behind a barbed-wire fence in a temporary settlement setup in a “no man’s land” border zone between Myanmar and Bangladesh. AFP PHOTO / Ye Aung THU

19 Oct 2018 – The UN Security Council is scheduled to hear a briefing next week from the head of a UN fact-finding mission that has accused Myanmar’s military of atrocities against Muslim Rohingya, diplomats said yesterday.

Nine countries including the United States, Britain and France requested the briefing that is likely to be opposed by China, which has friendly ties with Myanmar’s military.

The meeting was scheduled for Oct. 24 despite objections from Myanmar, which has rejected the findings of the UN inquiry.

The fact-finding mission released an explosive report last month that called on the council to refer the Myanmar situation to the International Criminal Court in The Hague, or to create an ad hoc international criminal tribunal, as was done with the former Yugoslavia.

The report said that Myanmar’s top generals, including Commander-in-Chief Min Aung Hlaing, must be investigated and prosecuted for genocide in Rakhine State.

Myanmar has rejected accusations that its military committed atrocities in the crackdown last year that forced more than 700,000 Rohingya to flee over the border to Bangladesh.

Myanmar’s Ambassador Hau Do Suan said in a letter to the Security Council this week that his government “strongly objects” to the request to hear the chairman of the mission.

Britain, France, Peru, Sweden, Ivory Coast, the Netherlands, Poland, Kuwait and the United States requested the meeting that could still be blocked by a procedural vote.

If there is no move to block the meeting, the council will hear from Marzuki Darusman, an Indonesian lawyer who was appointed last year by the UN Human Rights Council to chair the mission.

In its report, the mission said there were reasonable grounds to believe that the atrocities  were committed with the intention of destroying the Rohingya, warranting the charges of “genocide.”

Myanmar maintains that the violence in Rakhine was triggered by Rohingya extremists who attacked border posts in Aug. 2017.