As Facebook Bans Alternative Media to ‘Promote Online Safety,’ They Allowed a Child to Be Sold in a Post

While Facebook was actively deleting countless pages for promoting peace and freedom, they allowed an auction to be held in which a child was for sale—for weeks. 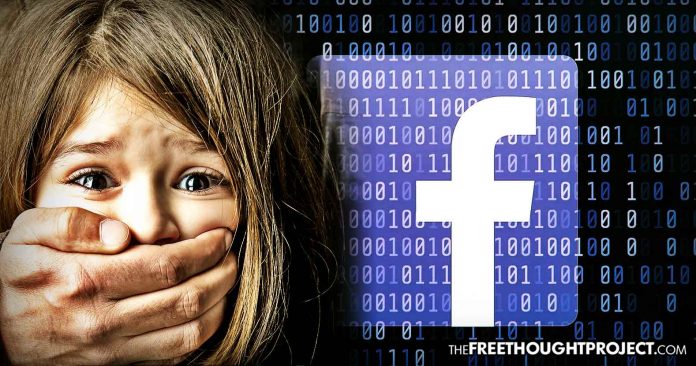 21 Nov 2018 – Last month, Facebook and Twitter — without warning or justification — deleted the pages of Free Thought Project and Police the Police which had over 5 million followers. During this purge, they also removed hundreds of other pages including massive police accountability groups, antiwar activists, alternative media, and libertarian news outlets. Facebook claimed to remove these pages in the name of fighting disinformation online and creating a safer user experience. Illustrating just how big of ostentatious sham this was, this month, a child was openly sold on this same platform that claims to promote online safety.

Last month, an auction was held on Facebook in which a child bride was put up for sale in a public post. People openly bid on Facebook for a 16-year-old girl’s hand in marriage.

Facebook claims they removed the post, but this wasn’t until the auction had ended and the girl had been sold.

As FOX 59 reports, according to children’s rights organization Plan International, the girl was bid on by five men, some of whom were reportedly high-ranking South Sudanese government officials.

“That a girl could be sold for marriage on the world’s biggest social networking site in this day and age is beyond belief.”

As Facebook doles out bans for photos of ET, deletes pages with millions of followers for promoting peace, and censors alternative media, the post selling a human child to a life of slavery was allowed to remain up for 15 days.

“Any form of human trafficking — whether posts, pages, ads or groups is not allowed on Facebook. We removed the post and permanently disabled the account belonging to the person who posted this to Facebook,” a company spokesperson said in a statement.

“We’re always improving the methods we use to identify content that breaks our policies, including doubling our safety and security team to more than 30,000 and investing in technology,” the spokesperson added.

“Violations against women in South Sudan are a continuing issue, but for Facebook to allow their platform to enhance these violations is a problem,” said Judy Gitau, Equality Now’s regional coordinator for Africa.

But this is Facebook and they can get away with it. Had the company actually been trying to promote a safer space on their platform like they claim, instead of censoring alternative media, perhaps they would’ve spotted the post selling a child faster. Instead, however, they were too busy deleting the pages of those who seek to hold child traffickers and corrupt government accountable. A travesty indeed.

In May, Facebook announced that it partnered with the arm of the Atlantic Council, known as the Digital Forensic Research Lab. They claim this partnership was made to help the social media behemoth with “real-time insights and updates on emerging threats and disinformation campaigns from around the world.”

Certainly a child being sold in a post is a “threat,” right? Not to Facebook and the Atlantic Council—who appear more concerned with pages promoting peace and exposing government corruption. Highlighting this notion is the fact that during the same time period that this girl was auctioned off, Facebook’s censorship arm repeatedly deleted the page “Liberty Memes” dozens of times.

When Liberty Memes was banned, a 2.0 popped up immediately and began growing. Not 24 hours later however, it was gone too. Such was the case with 3.0 and 4.0. Facebook was actively seeking out content creators who promoted peace and was deleting them faster than they could start new pages—yet a post selling a child remained for over two weeks.

The next time you see people calling for the banning of websites because one of their users made an offensive post, or violated some vague terms of service, remind them that Facebook allowed a post selling a child to stay up for 15 days while actively suppressing information that promotes peace and freedom for all.

Matt Agorist is an honorably discharged veteran of the USMC and former intelligence operator directly tasked by the NSA. This prior experience gives him unique insight into the world of government corruption and the American police state. Agorist has been an independent journalist for over a decade and has been featured on mainstream networks around the world. Agorist is also the Editor at Large at the Free Thought Project.