14 Nov 2018 –The United States has appropriated and is obligated to spend an estimated $5.9 trillion on the war on terror through Fiscal Year 2019, including direct war and war-related spending and obligations for future spending on post-9/11 war veterans.

This number differs substantially from the Pentagon’s estimates of the costs of the post-9/11 wars because it includes not only war appropriations made to the Department of Defense – spending in the war zones of Iraq, Syria, Afghanistan, Pakistan, and in other places the government designates as sites of “overseas contingency operations,” – but also includes spending across the federal government that is a consequence of these wars. Specifically, this is war-related spending by the Department of State, past and obligated spending for war veterans’ care, interest on the debt incurred to pay for the wars, and the prevention of and response to terrorism by the Department of Homeland Security.

If the US continues on its current path, war spending will continue to grow. The Pentagon currently projects $80 billion in Overseas Contingency Operations (OCO) spending through FY2023. Even if the wars are ended by 2023, the US would still be on track to spend an additional $808 billion (see Table 2) to total at least $6.7 trillion, not including future interest costs. Moreover, the costs of war will likely be greater than this because, unless the US immediately ends its deployments, the number of veterans associated with the post-9/11 wars will also grow. Veterans benefits and disability spending, and the cost of interest on borrowing to pay for the wars, will comprise an increasingly large share of the costs of the US post-9/11 wars.

Table 1 summarizes the direct war costs – the OCO budget – and war-related costs through FY2019. These include war-related increases in overall military spending, care for veterans, Homeland Security spending, and interest payments on borrowing for the wars. Including the other areas of war-related spending, the estimate for total US war-related spending allocated through FY2019 is $4.9 trillion. But because the US is contractually and morally obligated to pay for the care of the post-9/11 veterans through their lifetimes, it is prudent to include the costs of care for existing post-9/11 veterans through the next several decades. This means that the US has spent or is obligated to spend $5.9 trillion in current dollars through FY2019. Table 1 represents this bottom-line breakdown for spent and obligated costs.

Figure 1. US Costs of War: $5.9 Billion of Current Dollars Spent and Obligated, through FY2019 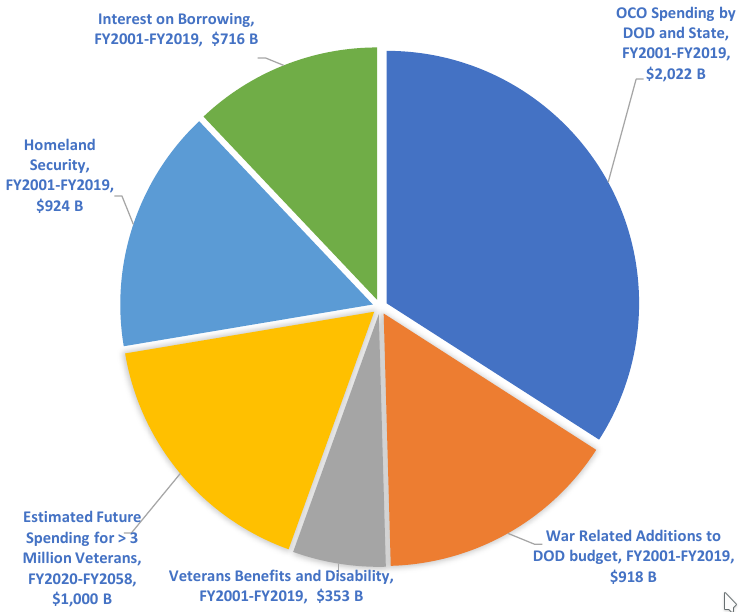 Further, the US military has no plans to end the post-9/11 wars in this fiscal year or the next. Rather, as the inclusion of future years spending estimates in the Pentagon’s budget indicates, the DOD anticipates military operations in Afghanistan, Pakistan, Iraq and Syria necessitating funding through at least FY2023. Thus, including anticipated OCO and other war-related spending, and the fact that the post-9/11 veterans will require care for the next several decades, I estimate that through FY2023, the US will spend and take on obligations to spend more than $6.7 trillion.

Neta C. Crawford is Professor and Chair of the Department of Political Science at Boston University and Co-Director of the Costs of War Project at Brown University.

Anticopyright: Editorials and articles originated on TMS may be freely reprinted, disseminated, translated and used as background material, provided an acknowledgement and link to the source, TMS: Costs of Post-9/11 U.S. Wars to 2019: $5.9 Trillion, is included. Thank you.