8 Nov 2018 – Even though meat production is known to be a major contributor to climate change and environmental destruction, worldwide demand for meat continues to rise, said UN environment agency, UNEP, in a statement released today.

According to the World Economic Forum, the beef and dairy industry is responsible for more greenhouse gas emissions than the world’s biggest oil companies, with the combined emissions of the top meat and dairy companies exceeding those of highly industrialized nations such as Germany or the UK.

Despite this fact, the global meat industry continues to grow, with the Food and Agriculture Organization (FAO) predicting a 76 per cent in global meat consumption by 2050: more meat will be eaten than ever before in our history.

This is bringing about a wide range of negative consequences for the planet: meat production contributes to the depletion of precious water resources – around 1,695 litres is needed to produce just one quarter-pounder burger – and according to the Yale School of Forestry, cattle ranching is the largest driver of deforestation in every Amazon nation, accounting for 80 per cent of total clearance. Raising animals takes up about 80 per cent of agricultural land, but only contributes to 18 per cent of the world’s calories.

Whilst admitting that it is unrealistic to expect the world population to cut meat from its diet overnight, James Lomax, Sustainable Food Systems and Agriculture Programme Management Officer at UN Environment, is calling for an ecological balance to be struck: “Reducing intensively farmed meat consumption is good for people and the planet. That means eating a sustainably reared or alternative burger or steak now and then, rather than an intensively-farmed mass-produced version three times a week.”

There is also a known cost to human health, especially when it comes to eating processed meat: Antibiotics used to rear livestock and keep animals disease-free often end up in our food, particularly products sold by fast-food chains, contributing to antibiotic resistance in humans. 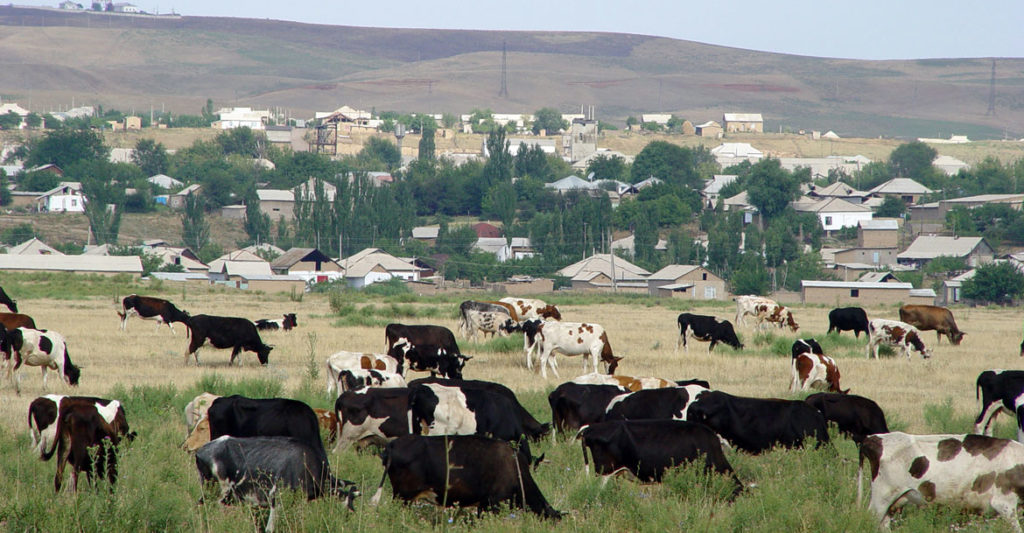 A herd of cattle graze in a pasture near a village in Kazakhstan. Daniil Nenashev/World Bank

However, alternatives are slowly but surely becoming more popular – with research reportedly predicting that plant-based food diets will become more common-place – including a small but growing trend for meat-free “meat.”

Two companies making headlines, and money, in this space are US-based Impossible Foods and Beyond Meat, both of which have received the UN’s highest environmental honour, the Champions of The Earth award.

These innovators, described by UNEP as “plant-based revolutionaries,” invested in research to strip the basic building blocks of meat down to protein, fat, water and trace minerals, recreating meat entirely from plants—at a fraction of the cost to the environment.

According to a study by Beyond Meat and the University of Michigan, Americans – who eat an average of 3 burgers per week – could save the amount of greenhouse gas emissions produced by 12 million cars, simply by swapping one of those weekly meals with a plant-based alternative.

Plant-based “meat” production also uses up to 99 per cent less water, up to 95 per cent less land, and generates up to 90 per cent fewer harmful emissions than regular beef burgers, whilst consuming nearly half the energy.

The UNEP statement is part of a series of discussions being generated by the agency, urging people to “Think Beyond and Live Within,” during the build up to the 2019 UN Environment Assembly, which will take place in the Kenyan capital Nairobi, between March 11 and 15.