9 Nov 2018 – For Nurul Amin, a Rohingya Muslim living in a refugee camp in Bangladesh, the days since learning he and his family were among a group of people set to potentially be repatriated to Myanmar have been among the most frightening since they fled their home. 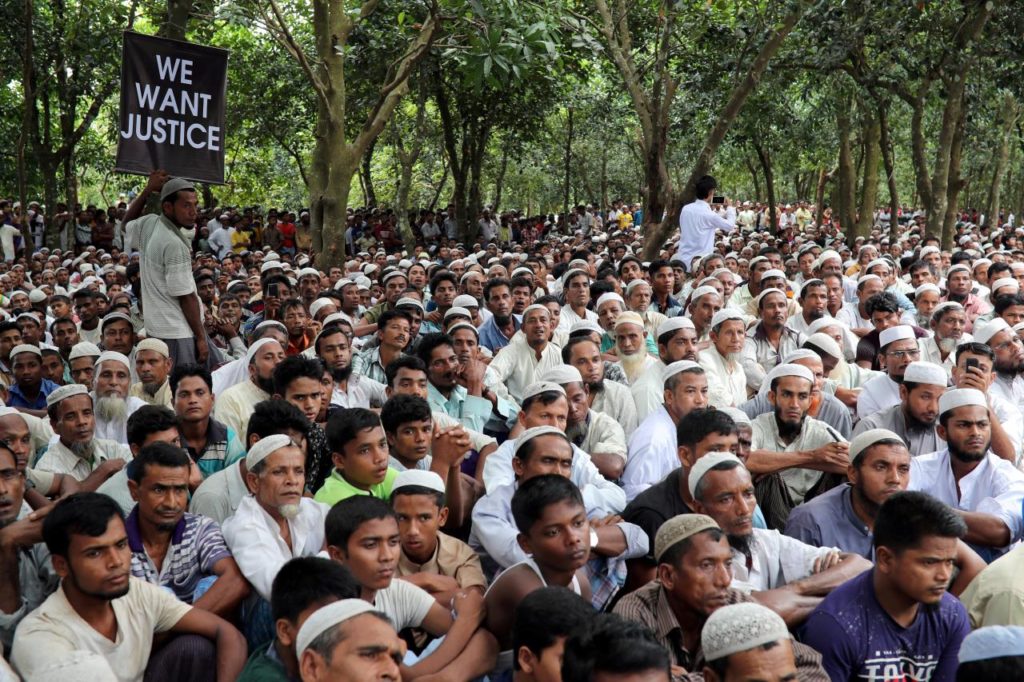 FILE PHOTO: Rohingya refugees take part in a protest at the Kutupalong refugee camp to mark the one year anniversary of their exodus in Cox’s Bazar, Bangladesh, August 25, 2018.
REUTERS/Mohammad Ponir Hossain/File Photo

“I can hardly sleep at night for fear of getting forcibly repatriated. Since the time I heard that my name is on the list I can’t even eat,” says Amin, 35, who has four daughters, a wife and sister with him in the Jamtoli Camp in southeast Bangladesh.

Reuters identified and spoke to more than 20 of the roughly 2,000 Rohingya refugees on a list of people Myanmar has agreed to take back. Though officials say no-one will be forced to return against their will, all say they have been terrified since learning this month their names were on the list prepared by Bangladeshi officials and vetted by Myanmar.

The list has not been made public and not all those whose names are on it have been informed, say Bangladeshi camp officials, due to concerns of sparking widespread panic in a camp that shelters 52,000 refugees.

Bangladesh and Myanmar agreed in late October to this month begin the repatriation of hundreds of thousands of Rohingya Muslims who fled across the border to escape a Myanmar army crackdown, even though the United Nations’ refugee agency and aid groups say doubts persist about their safety and conditions in Myanmar should they return.

Refugees said soldiers and local Buddhists carried out mass killings and rape during the violence in 2017, while U.N.-mandated investigators have accused the military of unleashing a campaign with “genocidal intent”.

Myanmar has denied almost all the allegations. It has rejected the U.N. findings as one-sided, and said the military action was a legitimate counterinsurgency operation.

This week, the U.N.’s human rights investigator on Myanmar urged Bangladesh to drop the repatriation plan, warning that Rohingya still faced a high risk of persecution in Myanmar.

A Bangladesh foreign ministry official, who asked not to be named, said on Friday the country would not send any Rohingya back forcefully.

“The Bangladesh government is in talks with them to motivate them,” he said.

Separately, another foreign ministry official told Reuters the United Nations High Commissioner for Refugees (UNHCR) would verify whether those shortlisted were willing to return.

Firas Al-Khateeb, a UNHCR representative in Cox’s Bazar, told Reuters that effort would start within a few days.

“We have not started the process yet but we will be carrying out an assessment of the voluntariness,” he said.

Dr Min Thein, director of the disaster management department at the Ministry of Social Welfare, Relief and Resettlement in Myanmar, said his team was preparing for 2,000 people to return.

In late October, a delegation from Myanmar visited the camps in an effort to urge Rohingya to participate in the repatriation process.

“Throw Us into the Sea”

Refugees who spoke to Reuters said they did not trust the Myanmar authorities to guarantee their safety. Some said refugees would go back only if they got to return to their own land and were given citizenship.

“I’ll just consume poison if I am forced to go back. I saw my cousin shot dead by military … What is the guarantee that we’ll not be persecuted again?” said Abdur Rahim, 47, who previously owned a shop and 2 acres of land in Rakhine.

Nur Kaida, 25, who is the mother of a 19-month-old girl, said it “would be better to die in the camps rather go back and get killed or raped”.

On Friday, an alliance of humanitarian and civil society groups working in Rakhine and in refugee camps in Bangladesh, in a joint statement, warned sending people back would be “dangerous and premature”.

The group called on the governments of the two countries to ensure that refugees in Bangladesh were able to make a free and informed choice about their return. It also said U.N. agencies should have unimpeded access to all parts of Rakhine in order to monitor the situation in areas of potential return.

Recent days have seen dozens of Rohingya in Myanmar and Bangladesh attempting to flee via sea to Malaysia, raising fears of a fresh wave of dangerous voyages.

But despite poor conditions in the camps prompting some to risk such a perilous route out, those like Muhammed Wares, 75, whose name is on the list, say it is better than going back.

“Why are they sending us back?” said Wares. “They may as well throw us into the sea.”