Genetically Engineered Viruses May Become the Next Generation of Warfare 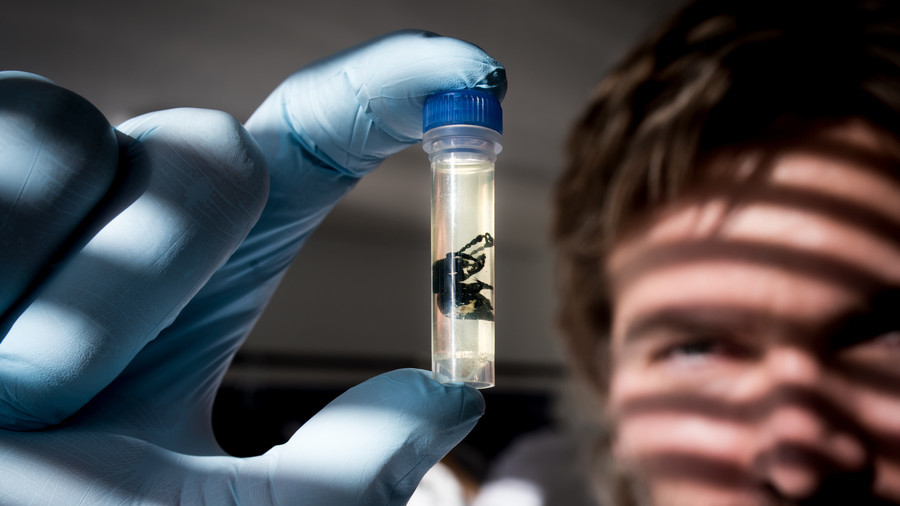 1 Nov 2018 – Many technologies have dual use potential and can be applied to either civilian or defense projects, depending on the intent of those in charge.

Nowadays, US scientists at the Defense Advanced Research Projects Agency (DARPA) are working on a project called Insect Allies which will use insects to infect crops with genetically modified viruses that edit the crops’ genetic profile to make them more resilient against disease, as well as natural and manufactured threats to the food supply. It is not clear how the insects’ flight paths would be controlled to ensure they only infect designated targets.

DARPA is administered by the US Department of Defense and was founded after the Soviet Union launched the Sputnik 1 satellite in 1957. The agency published a communiqué asserting that the program has no sinister intentions and seeks to

“provide new capabilities to protect the United States, specifically the ability to respond rapidly to threats to the food supply”.

“widely perceived as an effort to develop biological agents for hostile purposes and their means of delivery, which—if true—would constitute a breach of the Biological Weapons Convention”.

If the know-how and means exist to transmit genetic viruses that supposedly create beneficial crop mutations, the opposite will also be possible – using insects to deliver gene editing viruses that destroy crops, ruin harvests and adversely affect the wider ecosystem.

Another project receiving DARPA funding involves releasing genetically modified mosquitoes in the Florida Keys area to transmit a sterilizing genetic virus to their malaria carrying counterparts. Apart from the unknown effects upon the wider ecosystem, the knowledge gleaned from such research could one day make it possible for a state, a non-state actor, or a non-state actor working on behalf of a state to accidentally or deliberately use insect vectors to unleash a variety of biological agents and genetic viruses upon an unsuspecting population.

Gene editing technology has also made it possible for eradicated viruses to be brought back from the dead. Last year Canadian scientists managed to synthesize the horsepox virus, believed to be extinct and harmless to humans, at a cost of only $100,000 leading to fears that the same techniques can be employed to recreate other members of the poxvirus family, such as the extinct but deadly smallpox virus that killed 300 million people in the last century alone.

Although still within the realm of dystopian science fiction, the techniques to reconstitute extinct viruses from DNA fragments or spread viruses that mutate plant DNA may one day be refined to enable the creation of viruses designed to target members of a particular ethnic group. Curiously, last year the US Air Force was seeking to obtain genetic and tissue samples that are

“collected from Russia and must be Caucasian” and would “not consider tissue samples from Ukraine.”

It is unclear why the US Air Force requires Russian genetic material and there is no evidence indicating malicious intent. However, one cannot discount concerns raised at the highest echelons of the Russian government about what appears to be a plan to collect vast quantities of genetic material from Russian citizens for unknown purposes.

“… do you know that biological material is being collected all over the country, from different ethnic groups and people living in different geographical regions of the Russian Federation? The question is – why is it being done? It’s being done purposefully and professionally. We are a kind of object of great interest.”

There may be a benign explanation for the above but it is not forthcoming. The knowledge obtained from civilian projects can be modified to have military applications, even if the age of biogenetic warfare is some years away. Although the US government might not officially sanction the creation of a biogenetic weapon, it is unlikely to have complete oversight of the entirety of its vast military-intelligence apparatus and the unfathomable deep state. The knowledge to create such a weapon could also spread from a state to a non-state actor tasked with carrying out the dirty work.

Although the US empire is in steady decline, it remains strong and will continue playing a major role on the world stage for some years to come. However, nations such as Russia and China are in the ascendant and have already ensured that the 21st century will be defined by a multipolar world rather than the Project for the New American Century.

In recent years, Russia has put in check a number of US plans which included setting up a NATO base in Crimea, destabilizing Russia’s neighbors and turning Syria into a rogue state run by terrorists. A small number of immensely wealthy and powerful individuals, as well as allies Israel and Saudi Arabia whose fates are intertwined with that of the US, have everything to lose and will pull out all stops to delay the decline of American hegemony and its inevitable consignment to the dustbin of history.

The US and its closest allies have frequently demonstrated they have no misgivings and few redlines when it comes to committing the worst human rights abuses in the interests of money and power. The urge to use a biogenetic weapon to incapacitate a rising competitor may one day prove too much of a temptation to ignore.

Tomasz Pierscionek is a doctor specialising in psychiatry. He was previously on the board of the charity Medact, is editor of the London Progressive Journal and has appeared as a guest on RT’s Sputnik and Al-Mayadeen’s Kalima Horra.