Haiti: Police Repression Escalates on Anniversary of the Battle of Vertieres

19 Nov 2018 – Sunday November 18, 2018, was the 215th anniversary of the victory at the battle of Vertieres when Haitians won a decisive battle against French forces in 1803, leading to the declaration of Haitian independence. People all over Haiti marked the occasion with massive protests against the theft of billions of dollars of Petrocaribe funds provided to the Haitian government by Venezuela. The demonstrators continued their call for the end to the murderous UN/US occupation and the imposed, illegitimate government of president Jovenel Moise and prime minister Jean-Henri Ceant.:https://twitter.com/i/status/1064222941880053760.  According to radio and witness reports the police have been shooting at unarmed protestors, wounding and killing an undetermined number. 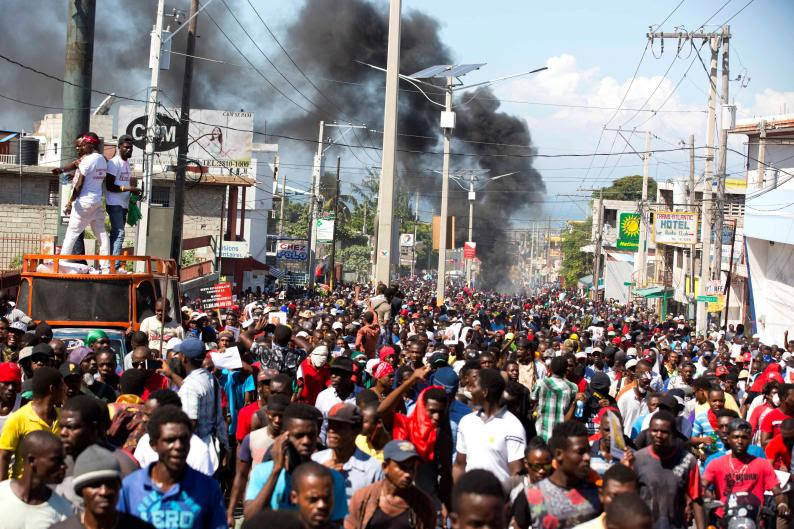 The situation on the ground in Haiti has been worsening as the Moise regime, backed by the U.S. and the UN, has ramped up a savage campaign of repression against the population. In the Port-au-Prince area alone, the list of attacks includes the police killing of a student leader on 10/31/18, the shootings during the week of 11/5/18 of teachers and high school students in Site Soley (Cite Soleil) protesting months of non-payment of overdue salaries and the lack of educational supplies, the mass killings and land-grab expulsion in Kanaan (Canaan) and the massacres on November 13 and 17, 2018 in the community of Lasalin (La Saline).

Haitians are holding the US/UN occupation accountable for these atrocities, The UN trains, supervises the murderous Haitian police and oversees Haiti’s horrendous prisons; beatings, torture and killings are reportedly routine. Fanmi Lavalas Political Organization issued the statement below condemning the 11/13 horrible massacre in Lasalin which was occurring during the commemoration of another government organized massacre in Granravin (Grand’ Ravine) on 11/13/17, one year ago to the day; see facebook Haiti Action Committee. The statement in Kreyol, also heard over a graphic video from Haitiinfoproj showing some of the victims, also calls on the people to resist as the liberation of Haiti is in their hands. The death toll varies as reports from witnesses are being assessed; many were disappeared, bodies were also reportedly burned and trucked away.

The people of Haiti refuse to accept dictatorship and terror; they need our support and solidarity. They are unarmed and bravely taking on the US/UN-supported killers, the UN-trained police and their paramilitary attaches or affiliates.

Fanmi Lavalas Political Organization strongly condemns the massacre that the Jovenel and Ceant regime conducted in Lasalin where they assassinated many innocent people. The bodies of the victims they’ve shot, photos of the innocents they have mutilated with machetes are in plain sight for all to see. These bodies are piled on garbage heaps as this criminal regime engages in terror to prevent the battle of Vertiere commemoration from putting an end to their misdeeds. This must stop. These massacres will not make us back down. The days of these criminals are numbered. The liberation of Haiti is in our very hands, the people of Haiti.

Solidarity with the victims of Lasalin is solidarity with all victims throughout the country. Unity among the enslaved gave birth to the victory of November 18, 1803. Similarly, 215 years later, on this November 18, 2018 anniversary, the general uprising to demand where are the Petrocaribe funds must deliver the ultimate victory.