India Unveils World’s Tallest Statue, Twice the Size of the Statue of Liberty 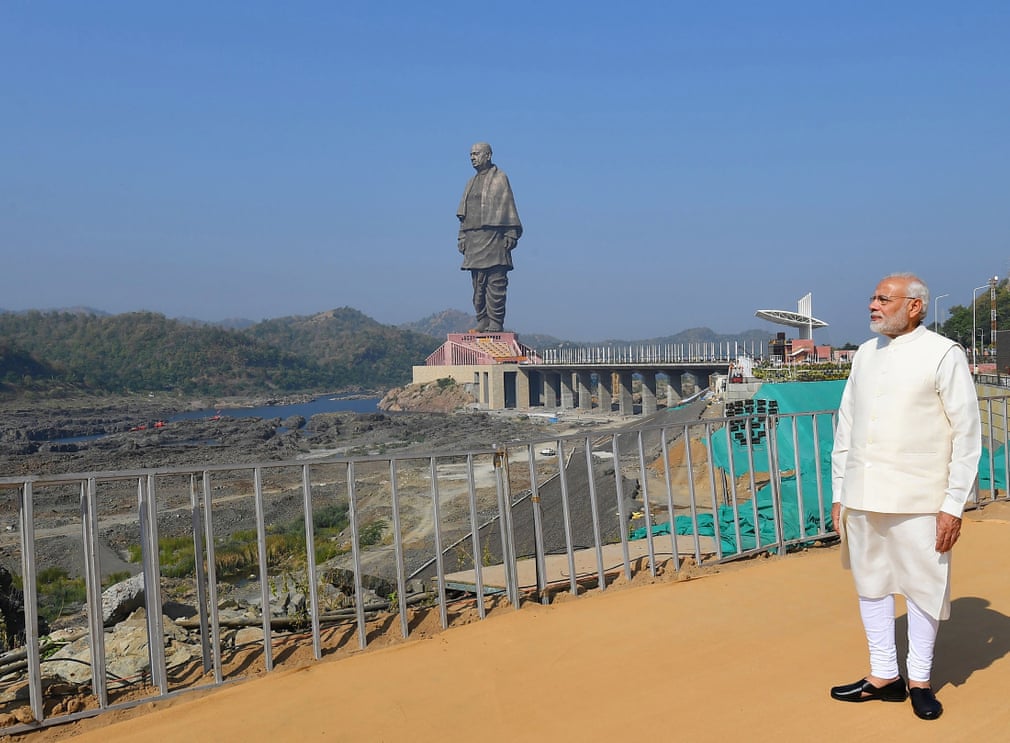 The Indian Prime Minister, Narendra Modi, attends the inauguration of the statue, which has been constructed near the Narmada dam in Gujarat. The 597-foot steel and bronze “Statue of Unity” honors Vallabhbhai Patel, India’s first deputy prime minister. Photograph: EPA

31 Oct 2018 – The tallest statue in the world, honoring India’s first deputy prime minister and twice as tall as the Statue of Liberty, was unveiled Wednesday.

The 597-foot steel and bronze “Statue of Unity,” erected in Prime Minister Narendra Modi’s home state of Gujarat, depicts Vallabhbhai Patel, who played a part in unifying the country and leading it to independence.

Modi ordered the statue built when he was Gujarat chief minister. It took 33 months to build.

Wednesday was Patel’s birthday, known as National Unity Day. “Brothers and Sisters, this highest statue of the world will be remembered for the whole world, our future generations, the courage, strength and determination of that person,” Modi said at the ceremony. 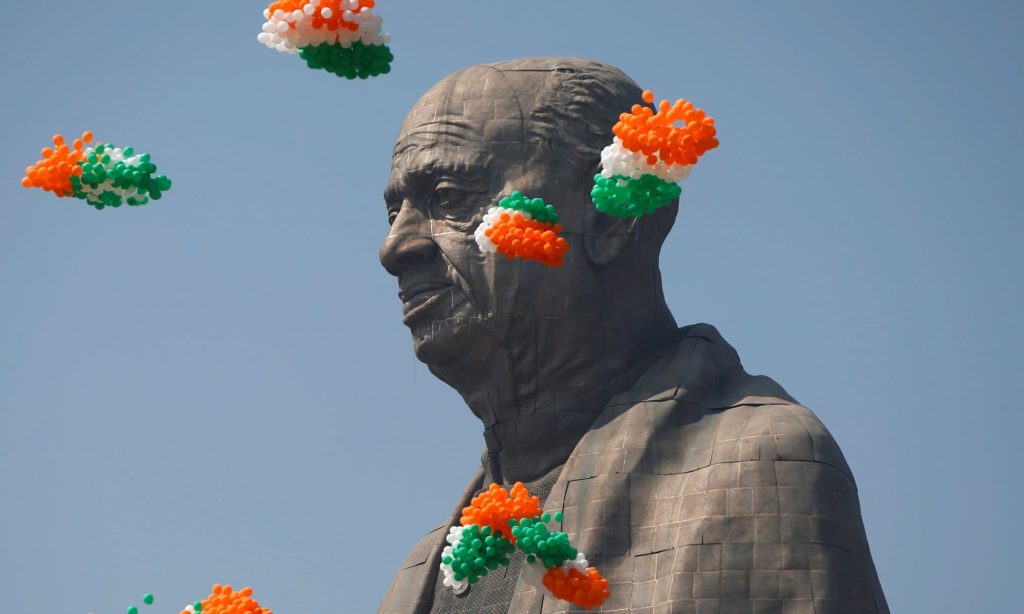 On the banks of the Narmada stands the majestic statue of a great man, who devoted his entire life towards nation building.
It was an absolute honour to dedicate the #StatueOfUnity to the nation.
We are grateful to Sardar Patel for all that he did for India. pic.twitter.com/q2F4uMRjoc

Facing five state elections and a general election due by May, Modi and his Bharatiya Janata Party (BJP) are reaching back into history for alternatives to the heroes of the Nehru-Gandhi family that dominated Congress. 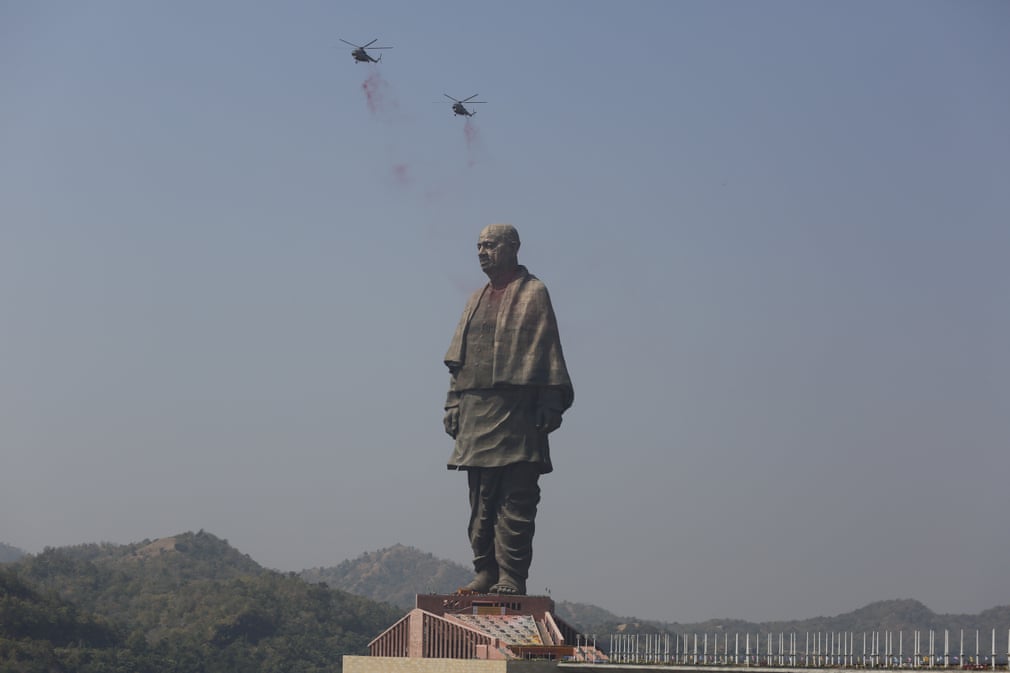 Helicopters shower flower petals on the monument. Depicting Patel in traditional attire, with a shawl over his shoulders, the statue used 210,000 cubic metres of cement, 25,000 tonnes of steel and 1,700 tonnes of bronze.
Photograph: Ajit Solanki/AP

The BJP says Congress has deliberately ignored leaders such as Patel, B.R. Ambedkar, who led the drafting of the constitution, and freedom fighter Subhas Chandra Bose.

The accusations are a distortion of history, says Congress, which ruled India for much of its independence history and is now led by Rahul Gandhi, the great-grandson of Jawaharlal Nehru, India’s first prime minister.

Some political commentators have criticized Modi for his expenditure on the statue complex at a time when the Adivasis, the indigenous people who farm the land acquired for it, are in economic straits and have protested against it.

The next three tallest statues in the world all depict Buddha. They are in China, Myanmar and Japan. 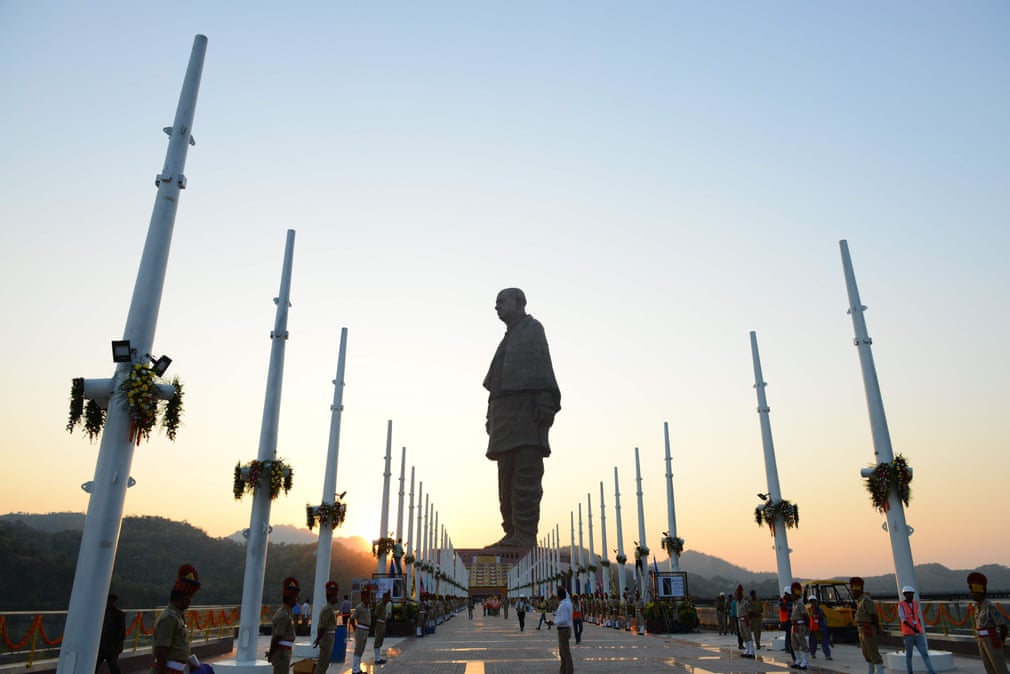 Huge security arrangements were in place for the inauguration after local people threatened protests. Activists said about a dozen of their leaders had been detained.
Photograph: Sam Panthaky/AFP/Getty Images