More American Troops to Afghanistan, to Keep the Chinese Out? Lithium and the Battle for Afghanistan’s Mineral Riches 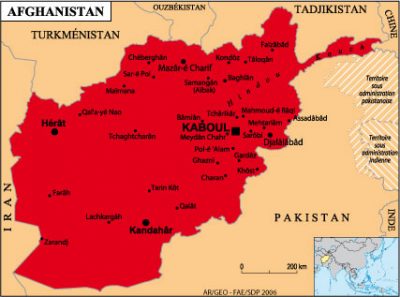 18 Nov 2018 – Trump calls for escalation of the war in Afghanistan. Why? Is it part of the “Global War on Terrorism”, going after the bad guys, or is it something else?

These mineral reserves include huge veins of iron, copper, cobalt, gold and lithium, which is a strategic raw material used in the production of high tech batteries for laptops, cell phones and electric cars.

The implication of Trump’s resolve is to plunder and steal Afghanistan’s mineral riches to finance the “reconstruction” of a country destroyed by the US and its allies after 16 years of war, i.e  “War reparations” paid to the aggressor nation?

While it could take many years to develop a mining industry, the potential is so great that officials and executives in the industry believe it could attract heavy investment…

“There is stunning potential here,” Gen. David H. Petraeus, commander of the United States Central Command, said… “There are a lot of ifs, of course, but I think potentially it is hugely significant.”

“This will become the backbone of the Afghan economy,” said Jalil Jumriany, an adviser to the Afghan minister of mines. (New York Times, op. cit.)

What this 2007 report does not mention is that this resource base has been known to both Russia (Soviet Union) and China going back to the 1970s.

While the Afghan government of President Ashraf Ghani has called upon President Donald Trump to promote US. investments in mining, including lithium, China is in the forefront in developing projects in mining and energy as well as pipeline projects and transport corridors.

China is a major trading and investment partner with Afghanistan (alongside Russia and Iran), which potentially encroaches upon US economic and strategic interests in Central Asia

Afghanistan’s estimated $3 trillion worth of unexploited minerals, Chinese companies have acquired rights to extract vast quantities of copper and coal and snapped up the first oil exploration concessions granted to foreigners in decades. China is also eyeing extensive deposits of lithium, uses of which range from batteries to nuclear components.

The Chinese are also investing in hydropower, agriculture and construction. A direct road link to China across the remote 76-kilometer border between the two countries is in progress. (New Delhi Times, July 18, 2015)

Afghanistan has extensive oil reserves which are being explored by China’s National Petroleum Corporation (CNPC). 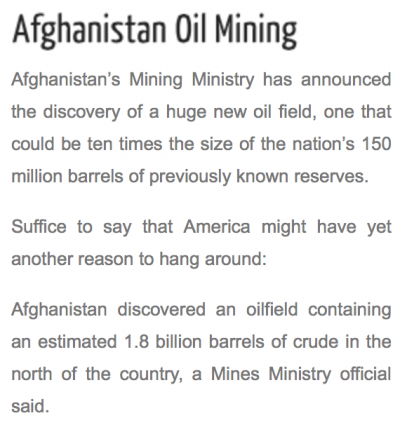 “War Is Good for Business”

The US military bases are there to assert US control over Afghanistan’s mineral wealth. According to Foreign Affairs, “there are more U.S. military forces deployed there [Afghanistan] than to any other active combat zone”, the official mandate of  which is “to go after” the Taliban, Al Qaeda and ISIS as part of the “Global war on Terrorism”.

Why so many military bases? Why the additional forces sent in by Trump?

Read More: “The War is Worth Waging”: Afghanistan’s Vast Reserves of Minerals and Natural Gas

The unspoken objective of US military presence in Afghanistan is to keep the Chinese out, i.e hinder China from establishing trade and investments relations with Afghanistan.

More generally, the establishment of military bases in Afghanistan on China’s Western border is part of a broader process of military encirclement of the People’s Republic of China.–i.e naval deployments in the South China sea, military facilities in Guam, South Korea, Okinawa, Jeju Island, etc. (see 2011 map below) 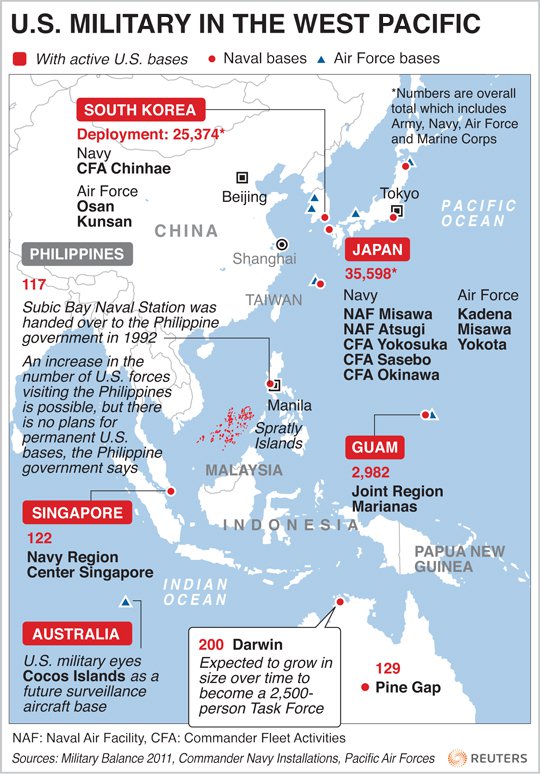 Under the Afghan-US security pact,  established under Obama’s Asian pivot, Washington and its NATO partners have established a permanent military presence in Afghanistan, with military facilities located close to China’s Western frontier.  The pact was intended to allow the US to maintain their nine permanent military bases, strategically located on the borders of China, Pakistan and Iran as well as Turkmenistan, Uzbekistan and Tajikistan. 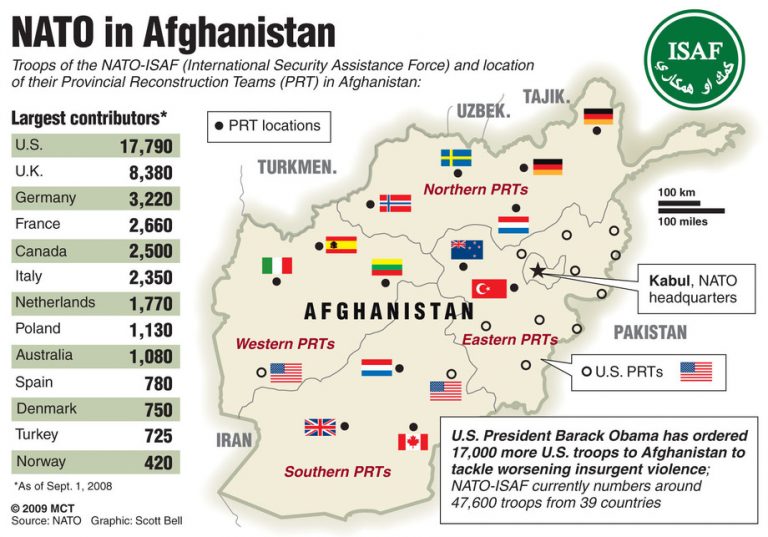 US military presence, however, has not prevented the expansion of trade and investment relations between China and Afghanistan. A strategic partnership agreement was signed between Kabul and Beijing in 2012. Afghanistan has observer status in the Shanghai Cooperation Organization (SCO).

Moreover, neighboring Pakistan –which is now a full member of the SCO–, has established close bilateral relations with China. And now Donald Trump  is threatening Pakistan, which for many years has been the target of  America’s “undeclared drone war”.

In other words, a shift in geopolitical alignments has taken place which favors the integration of Afghanistan alongside Pakistan into the Eurasian trade, investment and energy axis.

Pakistan, Afghanistan, Iran and China are cooperating in oil and gas pipeline projects. The SCO of which Turkmenistan, Uzbekistan and Tajikistan are full members is providing a geopolitical platform for the integration of Afghanistan into the Eurasian energy and transport corridors. 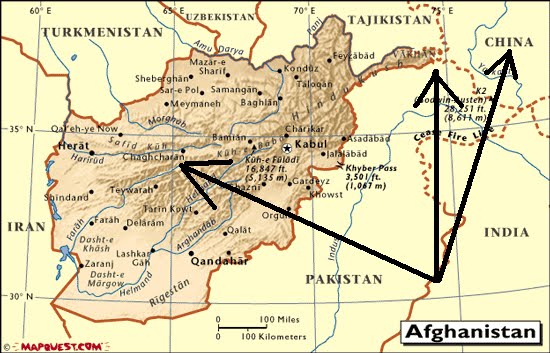 China is eventually intent upon integrating Afghanistan into the transport network of Western China as part of the Belt and Road initiative.

Moreover, China’s state owned mining giant, Metallurgical Corporation of China Limited (MCC) “has already managed to take control of the huge copper deposit Mes Aynak, which lies in an area controlled by the Taliban.  Already in 2010, Washington feared “that resource-hungry China will try to dominate the development of Afghanistan’s mineral wealth which would upset the United States”… After winning the bid for its Aynak copper mine in Logar Province, China clearly wants more” (Mining.com) 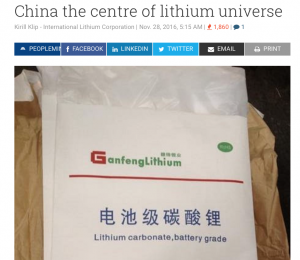 China and the Battle for Lithium

Chinese mining conglomerates are now competing for strategic control of the global Lithium market, which until recently was controlled by the “Big Three” conglomerates including Albemarle’s Rockwood Lithium (North Carolina), The Sociedad Quimica y Minera de Chile and FMC Corporation, (Philadelphia) which operates in Argentina. While the Big Three dominate the market, China now accounts for a large share of global lithium production, categorized as the fourth-largest lithium-producing country behind Australia, Chile and Argentina. Meanwhile China’s Tianqi Group has taken control of Australia’s largest lithium mine, called Greenbushes. Tianqi now owns a 51-percent stake in Talison Lithium, in partnership with North Carolina’s Albemarle.

This thrust in lithium production is related to China’s rapid development of the electric car industry:

China is now “The Center Of Lithium Universe”. China is already the largest market for electric cars. BYD, Chinese company backed by Warren Buffett, is the largest EV manufacturer in the world and Chinese companies are producing the largest amount of lithium chemicals for the batteries. There are 25 companies, which are making 51 models of electric cars in China now. This year we will see over 500,000 EVs sold in China. It took GM 7 years to sell 100,000 Chevy Volts from 2009. BYD will sell 100,000 EVs this year alone! (Mining.com, November 2016 report)

The size of the reserves of Lithium in Afghanistan have not been firmly established.

Analysts believe that these reserves which are yet to be exploited will not have a significant impact on the global lithium market.