The development could change the conversation around clean energy. 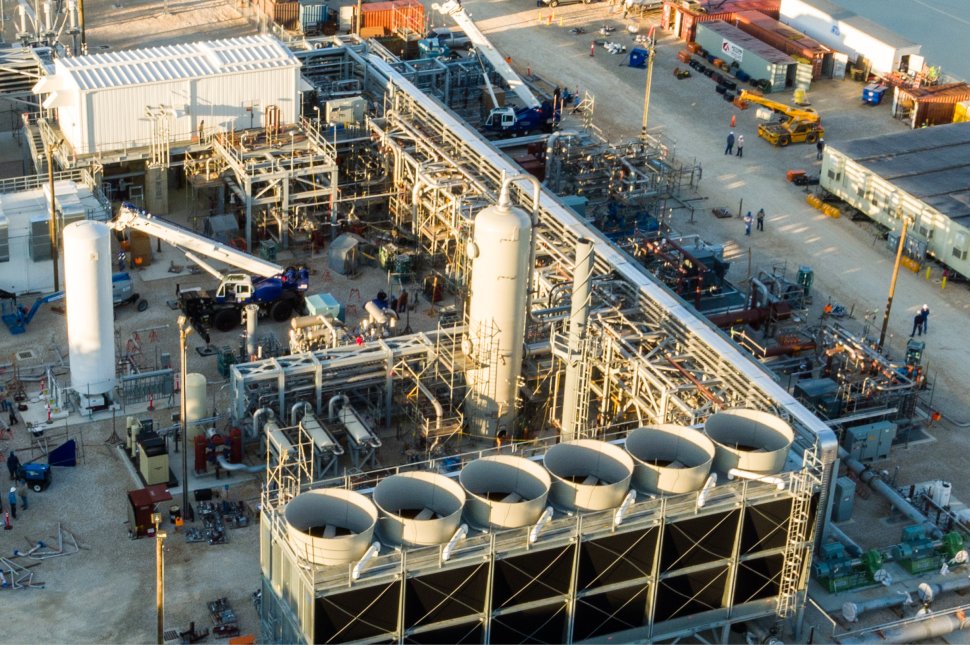 Net Power’s natural-gas plant in La Porte, Texas aims to capture and store – or “sequester” – 100 percent of the emissions it generates. Courtesy of NET Power

13 Nov 2018 – Drop into an energy conference or strike up a conversation about the any-day-now clean energy revolution, and inevitably the conversation will turn to “baseload” power: the search for an energy source that can churn out cheap, reliable, zero-emissions electricity at large scale – something able to replace polluting coal and gas plants without the intermittency of solar and wind.

Nuclear may have once held such a promise but for concerns about safety, government oversight, nuclear waste, and, most recently, astronomical construction costs. Now, however, a new technology has arrived – one that may finally claim the mantle of clean, emissions-free baseload power, even as it stokes consternation among environmental groups.

“The cost of new nuclear is prohibitive for us to be investing in,” Chris Crane, the CEO of energy company Exelon Corp., said at a discussion last month at the Brookings Institution. “Our bet for our company is advancing technologies around storage and sequestering technologies.”

Exelon is one of four investors in Net Power, an energy startup developing a new type of natural gas plant outside Houston that captures and stores – or “sequesters” – 100 percent of the emissions it generates. Though carbon capture and storage has been around for decades, it’s costly and energy intensive: A pilot project in Texas that installed carbon capture technology at a heavily polluting coal plant, for example, needed a new gas plant to power it – and captured only about a third of the unit’s total emissions.

The Net Power project in Texas, by contrast, promises to capture all of its own emissions: Whereas traditional power plants – whether coal, gas, nuclear or even certain types of solar – generate steam to push a turbine that then generates electricity, the Net Power project uses a pressurized stream of carbon dioxide, a much more efficient process.

The pilot plant earlier this year passed a significant development milestone known as “first fire,” and it’s on track to become fully operational by the start of 2019, top Exelon officials say. Set to generate 50 megawatts, commercial versions of the technology will be able to turn out about 300 megawatts – or roughly enough to power about 200,000 homes, based on average residential energy use in 2017.

“If that technology works as they claim, it’s pretty much a game-changer in terms of the cost of creating electricity and the CO2 stream,” says Anthony Kovscek, professor in energy resources engineering at the Stanford School of Earth, Energy and Environmental Sciences.

As with nuclear, cost remains a sticking point. Without subsidies, gas plants of the Net Power design simply won’t be able to compete with comparatively cheap coal and traditional natural gas, or even solar-plus-battery facilities that have seen prices fall, some energy experts say.

Economists and energy wonks across the political spectrum have long pushed for a carbon tax: a price on emissions that would reward clean-energy sources while charging coal and traditional gas plants for the “societal” costs they impose, such as the public health consequences of pollution or the environmental impacts of drilling and mining.

Earlier this year, however, congressional lawmakers took a different approach: Rather than taxing emissions, they tucked a provision into the 2018 Bipartisan Budget Act that introduced tax credits for each ton of carbon dioxide that was stored. The Net Power project and others like it, for example, will be able to earn subsidies of $50 per ton of CO2 it sequesters underground, or $35 per ton of CO2 it sells to oil producers for enhanced oil recovery, where producers inject gas into deposits to yield as much as 25 percent more oil.

Utilities would need a carbon price of “anywhere from a hundred to upwards of hundreds of dollars per ton” for carbon capture to make economic sense, says Lynn Loo, director of the Andlinger Center for Energy and the Environment at Princeton University.

Though a boon for carbon storage, the tax credits triggered outrage across a wide range of environmental groups. Rather than simply incentivizing carbon capture and storage, they pointed out, the measure simply makes enhanced oil recovery cheaper, rewarding oil companies for extracting more oil simply when they use CO2.

“We don’t support subsidies for fossil fuel production, including subsidies for enhanced oil recovery, that would conflict with the need to reduce our dependence on those fuels,” David Doniger, the organization’s senior strategic director for the Climate and Clean Energy Program, wrote in a March blog post with Natural Resources Defense Council alumna Danielle Droitsch. “We will work to ensure that the new tax credits are used as much as possible for [carbon capture and storage] projects that bury carbon dioxide in deep geologic formations without producing oil or put it into materials like cement that lock it up for good.”

Though cautiously optimistic about the role of carbon capture and storage in general – environmental groups across the board acknowledge that it can and should play a pivotal role in reducing emissions from the U.S. power sector – its implementation inevitably goes hand-in-hand with a continued reliance on fossil fuels: No company will invest in installing the technology unless it’s convinced there will be a continued, reliable supply of natural gas.

According to an analysis by the International Energy Agency of the tax plan passed by contrast, about 90 percent of projects under the tax credit will use CO2 for enhanced oil recovery. Net Power, it turns out, is no exception.

Earlier this month, Exelon and Net Power announced that they had attracted a new investor in the Net Power venture: Oxy Low Carbon Ventures. The company is a subsidiary of Occidental Petroleum, which generated some $12.5 billion last year. It’s plan: to use the CO2 generated by the Net Power plant for enhanced oil recovery projects.

“We see a tremendous opportunity to utilize this technology, not only in the United States, but internationally,” says Mike Pacilio, executive vice president of Exelon and CEO of Exelon Generation, which oversees the company’s power plants. “We’re not shutting down these wells: We still have a need for oil in the country. So what this does, it allows CO2 to generate electricity and be used for enhanced oil recovery, which is environmentally much superior to what we currently do.”

The project will still rely on the build-out of infrastructure, from pipelines to carry CO2 to oil fields to proper places to store it. Environmental advocates also point out that there will need to be rigorous oversight to ensure the captured CO2 – whether simply used or harness for enhanced oil recovery – actually stays underground.

Nonetheless, Loo, of Princeton, says, “if this pilot study goes well, I can imagine this being deployed very quickly.”