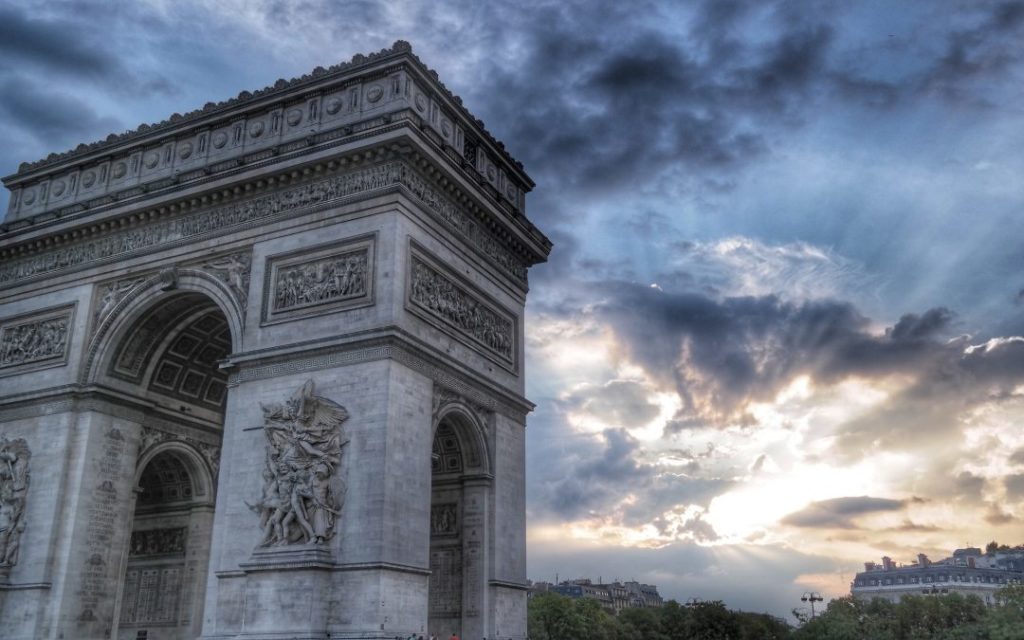 20 Nov 2018 – On Sunday, 11 Nov, 60 world leaders joined French President Emmanuel Macron in inaugurating the first edition of the Paris Peace Forum, a few hours after commemorating the centenary of the armistice that ended World War I. Although President Donald Trump is attending the armistice commemorations too, he will be boarding a flight back to Washington at the time when the forum opens.

No one knows what to make of the snub—Trump’s participation in the Forum was still a mystery less than a week before the start date. French diplomats speculated sarcastically that the reason for the uncertainty is that no one in the Trump administration had dared mention the conference to the president.

Indeed, the “America First” leader will find very little to like in the Paris Peace Forum. One of the signature events of Macron’s presidency stands in direct contrast with Trump’s sovereignty message, and the unilateralistand interest-driven foreign policy that goes with it. The forum is not a summit or a conference, but a gathering of “actors of global governance,” coming to “debate” and garner support for collective “solutions” for global governance and peace. Not exactly your Trumpian cup of tea.

Beyond the feel-good mission statement, the forum is indicative of today’s times. In an era of strengthened nationalism and great power competition, the rest of the world is looking for new approaches to save global cooperation. France—and Macron—are taking the lead to empower a global “resistance” of multilateralists hoping to salvage, or rebuild, a dwindling rules-based order. The question remains open whether the multilateralists can do that without U.S. leadership. Under Trump’s “America First,” the United States is self-isolating, and risks missing the opportunity to orient the rules of tomorrow, leaving others a chance to fill the vacuum. 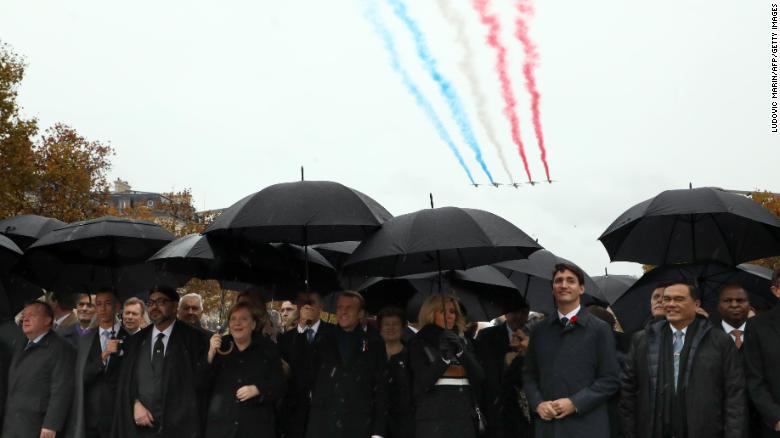 In practice, the first edition of the Forum will host around 2,500 people in the Grande Halle de la Villette, a former slaughterhouse turned cultural center on the northeast edge of Paris. Attendees from government, businesses, NGOs, foundations, the media, think tanks, and religious institutions from all corners of the world will take part in dozens of simultaneous debates—or agoras—on global challenges, will wander around stands presenting and raising support for 119 global governance projects—selected from a pool of 848 applicants—or will join the live hackathon on global financial transparency.

France has decided to adjoin the first edition of the forum to the commemorative celebrations of the 1918 armistice, so as to ensure strong heads of state and/or government participation and offer some war-and-peace gravitas to the forum. The world leaders will attend a lunch at the Élysée Palace after the ceremonies, then travel by bus to the forum, where they will listen to opening speeches by German Chancellor Angela Merkel and U.N. Secretary General António Guterres, before participating, on a voluntary basis, in workshops, debates, and other gatherings within the Grande Halle. At the time of writing, it is still unknown who will do what.

The forum was born out of the ambition to secure France’s place on the map of arenas where the fate of the world is discussed—such as the Munich Security Conference, the Shangri-La Dialogue, or Davos. Most other forums deal with security and the economy, and France hoped to make a different kind of contribution. The country’s priorities as a permanent member of the U.N. Security Council and a major advanced economy are far from parochial, and there are few global challenges which France does not want to touch. “Peace,” a universal ideal, is the umbrella concept for the five themes of the forum: development, environment, inclusive economy, new technologies, and peace and security.

The forum is intentionally non-Western-centric. The 119 projects selected to be presented at the forum originate from 42 countries and 10 international organizations. The 15-member steering committee gathers prominent individuals from five continents. France views itself as a bridge between the North and the South in yesterday’s world, the West and the Rest in today’s. Its four-corners-of-the-world colonial past gives France a massive network of partners and allies, in the name of which the country enjoys speaking in international organizations—although, in their eyes, France remains most often a European power, suspect of grandstanding for the sake of its own grandeur.

The French state hardly contributes financially to the forum, and the organizers preferred looking for non-Western support. The Mo Ibrahim Foundation is a founding member and Abu Dhabi’s environment agency a “grand partner,” but American philanthropy (Microsoft, the Rockefeller Foundation) and German public and foundation money (Germany’s development agency GIZ, the Körber Foundation) end up being unavoidable—that is where the big bucks are. The French have also publicized the forum outside Europe and North America as much as possible—and ended up flying in participants from poorer regions to reach their objective of inclusivity. A diverse crowd will be one of the metrics of the forum’s success.

The forum is meant to be a contribution to multilateral efforts and the United Nation’s Sustainable Development Goals. Macron has called repeatedly for “strong multilateralism,” and under his leadership, in line with a long French tradition, France is contributing to U.N. efforts on global challenges, in particular education  and climate. However, compared to these more formal initiatives, the Paris Peace Forum has a distinct “Macron touch”: first, an implicit admission that the established multilateral system has failed, second, a brazen ambition that it can be fixed by betting on out-of-the-box solutions.

At the World Economic Forum, in January 2018, the French president warned that globalization was in “a significant crisis,” because of “the concentration of wealth” and a “new innovation and skills economy” that leave the middle and working classes on the curb. In order to make globalization acceptable to all, new “basic rules for the common good” needs to be negotiated—on labor, taxation, climate, trade, but also urbanization, migration, and technology. At the OECD in May 2018, Macron doubled down with proposals on reforming the World Trade Organization and introducing new topics for discussions at the OECD or the G20.

So far, Macron’s attempts to reform multilateral institutions have disappointed. A proposal by France to discuss reforming the WTO with China, Japan, the EU and the United States on November 11 has not led anywhere, mostly because America is uninterested. Frustrated and ambitious, Macron is looking for alternatives—the Paris Peace Forum is the venue to channel all that drive.

The forum is clearly oriented towards rules creation: Among the projects presented is a “Partnership for Regional Ocean Governance” that aims at fostering a better governance of the marine environment, and the “Digital Peace Project,” a Microsoft initiative to help lay the foundation of a safer digital world. The American tech giants are heavily invested in the forum—Microsoft is a major sponsor, Google and Twitter participate in debates, Google and Facebook each present three projects, including Facebook’s on “election integrity”—signaling their interest for innovative rule-making bodies.

The World without Trump

At this point, it is too early to tell whether the forum will have sustaining power. Will the press, the public, and the participants become interested enough in the projects that they are willing to see their progress through (10 projects will be honored at the end of the forum, and monitored afterwards)? Will participants from non-Western countries feel represented and valued, rather than being used by Macron to give the forum a veneer of inclusion?

Regrettably, the Paris Peace Forum will not address some of the most pressing issues regarding peace and security in the world today: civil/proxy wars in Yemen and Syria, North Korea’s nuclear weapons program, or rising tensions between the United States and China. Truth be told, these are long-term crises implicating great powers’ spheres of influence and high-stake military interests, hardly solvable by a bottom-up approach.

Yet, Macron, who likes to portray himself as a clear-eyed pragmatist willing to engage with autocratic or populist leaders, imagined the forum to be a platform where everything can be debated—including a very un-French ban on nuclear weapons. All leaders in attendance will have a chance to present their vision, including Russian President Vladimir Putin or Turkish President Recep Tayyip Erdoğan. The Chinese president is not in attendance, yet his big political project, the Belt and Road Initiative (BRI), will be presented by the Chinese embassy as a project under the label “inclusive economy.” Beyond the obvious understatement of BRI as a simple “project,” its inclusion is indicative of the ambiguity of the French approach: Should committed multilateralists be focused on the diffusion of liberal norms and standards? Or should the forum be truly inclusive, up to the point of presenting all worldviews, including those antithetical to the idea of a rules-based order?

In that case, what about Donald Trump? In the most recent phone call between Trump and Macron in October, the French president did not even mention the forum to his American counterpart—and keep in mind that this is a presidential initiative gathering 60 world leaders, not a small event. The limits of the Macron-Trump partnership is on full display here: It works as long as they deal with bilateral issues, but they stand on opposite side of the political spectrum on everything else. So as to avoid jeopardizing their relationship, the Frenchman appears to be avoiding all irritants, including the forum.

The American president’s absence at the forum reflects the American unmooring from the world of multilateralism.

Yet this is a mistake. Donald Trump needs to hear what the “good will powers,” as French minister of foreign affairs calls them, and civil society from all over the world have to say. At its heart, the Paris Peace Forum fundamentally aims to be a rejection of the world of Trump, Putin, and Xi, a “civil society” answer to the deficiencies of great powers, and a “populist” response to out-of-touch governments and sleepwalking institutions, in the hope of transcending the status quo and reviving multilateralism. American NGOs, think tanks, foundations and businesses are heavily invested in the project. But the American president’s absence at the forum reflects the American unmooring from the world of multilateralism and international institutions that it did much to shape since the armistice, from the Paris Peace Conference of 1919 to the Paris Climate Agreement of 2015, and a fundamental misunderstanding of the nature of power in the 21st century. Once again isolating itself under President Trump, the United States is losing an opportunity for America to influence tomorrow’s rules of engagement, and gifting others, including China and Russia, a chance to advance their competing visions.

Célia Belin is a visiting fellow in the Center on the United States and Europe at Brookings. Her areas of expertise include trans-Atlantic relations, U.S. foreign policy toward Europe, French politics and foreign policy, the role of civil society in foreign policy, religion/secularism, and strategic prospective analysis. Prior to joining Brookings, she served for over five years as an advisor on U.S. affairs and trans-Atlantic relations in the French foreign ministry’s Centre d’Analyse, de Prévision et de Stratégie.

Democratic World Federalists – What is world federalism? A government system where states/provinces are subordinate to a central governing body. A centralized global government system where nations would play a subordinate role under a world government, where all officials would be elected to their positions. In this new global government, local problems would be allowed to be solved locally, national problems solved nationally, and global problems solved globally. Our world federation will be built on the principles of democracy, republicism, secularism, and federalism. Together these concepts support a worldwide structure that can tackle today’s most pressing problems.